Thad Sheely, COO of the Atlanta Hawks, with Ashley Bell, co-founder of NBFF at the May 28 playoff game (Special: National Black Bank Foundation)

The Community Foundation for Greater Atlanta is partnering with the recently-formed National Black Bank Foundation (NBBF) by serving as its fiscal sponsor.

That relationship will enable NBBF to accept tax-deductible donations while it awaits its final IRS determination letter to act as an independent nonprofit entity.

The Community Foundation also will provide ongoing administrative services to NBBF by way of back-office support including providing financial oversight, managing donations and amplifying its mission across a network of 800 community foundations across the United States, thus accelerating NBBF’s ability to grow and scale its impact in local communities. 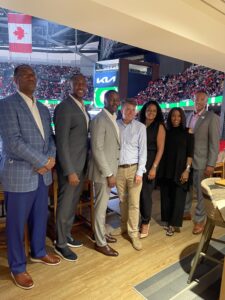 The new partnership reinforces the Atlanta role in the formation and launch of NBBF – an alliance of Black-owned banks seeking to provide greater financial services and loans to entities interested in diversifying their business relationships.

The concept for NBBF was announced in February when the Atlanta Hawks sought to refinance a $35 million construction loan for its Emory Sports Medicine Complex through a syndicate of 11 Black-owned banks.

“No one Black bank could do the deal on its own,” Ashley Bell, a partner with Dentons, who is a co-founder and general counsel of NBBF, explained at the time.

The idea for the Hawks deal with NBBF came out of the Leadership Atlanta 2020 class – where both Bell and Thad Sheely, chief operating officer of the Atlanta Hawks were classmates. They talked about the idea during racial justice march in June 2020.

The transaction finally closed the week of May 24th, and NBBF celebrated by going to a Hawks playoff game against the New York Knicks on May 28th.

The partnership with the Community Foundation has a similar twist.

“Our mission and mandate to our community is to build economic and social equity for all,” Fernandez said in a release. “Essential to that promise is providing access to banking and wealth building for Black families and businesses. Boosting the infrastructure of Black banks brings more equitable access to financial education, loans and asset building for Black communities. We wanted to support this initiative because at the end of the day, strengthening Black-owned banks ensures that those who have been hit the hardest by systemic racism will now have access to economic opportunity and upward mobility.”

In 1976, there were 50 Black-owned banks in the United States. Today, that number has dwindled to just 18, leaving many impoverished Black communities without retail banking options. According to the Federal Reserve, 49 percent of Black households were unbanked or underbanked in 2019, compared to just 15 percent of white families.

Part of the idea of NBBF is to strengthen Black banks and help them stay in business by tapping into new market segments and allowing them to package bigger financial deals through their syndicate. 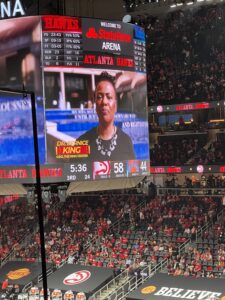 “The goal is to do our best to use this network so people can bank their values,” Bell said. “Banking your values means putting money in institutions that are reflective of your values.”

The National Black Bank Foundation’s wholly-owned investment unit, the Black Bank is making a historic injection of tier 1 capital, expected to reach $250 million by 2025. That capital, in turn, will allow Black banks to make $2.5 billion in new loans to communities of color – critical investments to build wealth.

“We appreciate the support and partnership of the Community Foundation for Greater Atlanta as we launch this historic investment in the Black financial sector,” Bell said. “Not only are they providing us with back-office support as we grow and scale, the Community Foundation also is aligned in lock-step with our values and mission to support building wealth in Black communities.”

NBBF launched with the support the KPMG accounting firm and Dentons, the world’s largest law firm. James Richardson, senior managing director Dentons, was the contact between the Community Foundation and NBBF.

The Community Foundation also will promote NBBF with its network of 800 community foundations across the country as a way of encouraging greater diversity in financial relationships in their organizations.

“The Hawks have been gracious enough to talk us up with other NBA teams,” Bell said. “We hope to have other announcements later this year.”