“I’m going back to the fishes,” Joe Handy said Thursday about his upcoming move to become CEO of Florida’s Clearwater Marine Aquarium on Oct. 3. 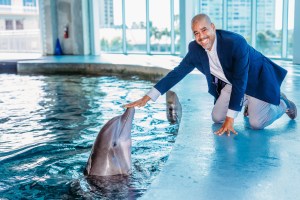 Upon leaving the Georgia Aquarium, Handy became CEO of the National Black MBA Association, where he was able to promote greater diversity and inclusion of Black people in business circles. His last day there was July 21.

Handy said that’s part of the role that Atlanta plays — providing opportunities for diversity and inclusion.

“Brian is an amazing person,” said Handy, who looks forward to working with Davis in his new role in Clearwater, Fla. “We are going to strengthen that connection.”

Handy, 47, will keep a residence in Atlanta. He will travel back and forth between Atlanta and Clearwater because family members still live here — his ex-wife, his daughter who is about to turn 20, and his younger twin boys.

Handy, however, is thrilled to be back working with the aquarium world. He is a big advocate for the role aquariums play in connecting people with sea animals as well as their role in protecting endangered species through research and breeding. 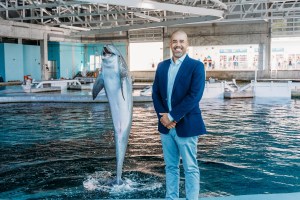 For example, he mentioned the declining population of Beluga whales.

“We are stepping in to make sure our kids and grandkids know about those majestic animals,” said Handy, who is familiar with the arguments of detractors of aquariums and zoos. “Aquariums are fundamentally in the business of making a connection between people and animals. There’s something magical when you interact with an animal.”

The Clearwater Marine Aquarium was founded in 1972, so it is celebrating its 50th anniversary this year.

“I’m very excited about the opportunity to work with the Clearwater Marine Aquarium,” Handy said. “I hope I will be able to enhance its presence and the research that’s being done at the aquarium.