Annapolis, MD – Anchoring the heart of this seaside, colonial capital is a can’t-miss commemoration to a beloved storyteller who died 20 years ago. 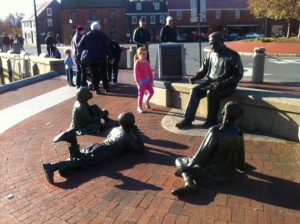 Alex Haley transformed the appreciation of family history by starting with his own wrenching past, and his bronze likeness sits in a storyteller pose on the city dock, overlooking the waters where the slave ship Lord Ligonier brought his forefather Kunte Kinte from Gambia 245 years ago.

Alex Haley authored the memoir “Roots,” and the Kunte Kinte–Alex Haley Memorial pays tribute to ancestor and descendant, the power of storytelling and the resurgence of interest in genealogy.

The sculpture showing an animated Haley speaking to three children also points indirectly to Atlanta, where slavery thrives today in the form of human trafficking.

First, back to Haley and the ocean that stretches from his statue. He was a writer best known for “The Autobiography of Malcolm X,” when he pitched the idea of expanding the family story of his African slave forefather that he had heard from his elders since his childhood. 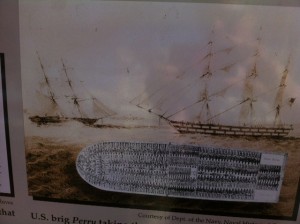 A photo of a slave ship is featured on an informational plaque at the Kunte Kinte-Alex Haley memorial in Annapolis, MD.

At about 900 pages, “Roots” went on to win a special award from the Pulitzer Prize committee and become published in more than 35 languages. On the small screen, Haley’s story spread exponentially.

In 1977 – 35 years ago — the eight parts of Haley’s family saga mesmerized American audiences who were only a year removed from the nation’s Bicentennial. Kunte Kinte, Chicken George, and Kizzy were fictionalized characters from Haley’s research into his past. Today, “Roots” has been viewed by an estimated 130 million people.

“In all of us there is a hunger, marrow-deep, to know our heritage- to know who we are and where we have come from,” Haley said. “Without this enriching knowledge, there is a hollow yearning. No matter what our attainments in life, there is still a vacuum, an emptiness, and the most disquieting loneliness. ”

In the wake of Haley’s literary comet came DNA testing, ancestry.com and genealogy detective shows like “African American Lives” and “Who Do You Think You Are?” 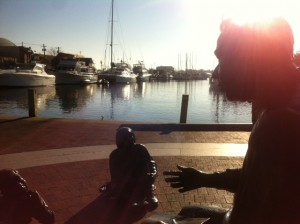 Alex Haley’s bronze looks out over the Annapolis City Port, where his ancestor Kunte Kinte arrived by slave ship 245 years ago.

With so much more information at our fingertips, its not so surprising anymore to discover that one’s lineage intermingles with other races and unfolds in far-off places. Haley’s triumph wasn’t just his story; it was inspiring so many of us to find out more of our own.

Although his personal motto was “Find the good and praise it,” Haley was a veteran journalist who looked unflinchingly at the human capacity for inflicting pain, also. It’s doubtful that he would be surprised to know of the persistence of slavery today through the human trafficking in the shadows of Atlanta.

Just like the big ships that carried slaves through the Middle Passage, our city’s transportation infrastructure facilitates the brokering of children and adults. This trade has been documented in the film, “Hidden in Plain View,” and challenged by former Mayor Shirley Franklin, among others.

As one example, this fall a federal judge in Atlanta sentenced Soloman Mustafa of Stone Mountain to life in prison for operating a sex trafficking ring. He and a co-defendant used Craigslist and sites like Backpage.com to recruit women into prostitution, strip them of any forms of identity and would not let them go.

The number of nonprofit groups in Atlanta trying to do something about this are growing, a recent state law enacted greater penalties for human trafficking, and there’s still work to be done – starting with greater awareness.

Because as Alex Haley also said: “Either you deal with what is the reality, or you can be sure that the reality is going to deal with you.”

Previous Article
Increase in Construction Good for Housing, Economy
Next Article
PR Practitioners’ Solutions: Wizard or Man Behind the Curtain?