Despite believing that residents in metro Atlanta are still climbing their way out of the Great Recession, co-campaign chairs of the United Way of Greater Atlanta — René and Barbarella Diaz — announced an ambitious $75.5 million goal for 2014-2015.

The energetic couple unveiled the goal at a campaign launch event Wednesday morning at the Loudermilk Center in downtown Atlanta – following a meeting of the United Way board, which had just approved the goal. 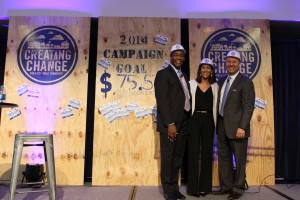 By comparison, United Way raised $74.39 million for the 2013-2014 campaign year under the leadership of Pat Falotico, senior state executive for IBM in Georgia.

The Diaz duo is the first time Atlanta’s United Way has had a couple co-chair the campaign, which traditionally has turned to corporate business executives for leadership.

The theme of this year’s campaign is: “Creating Change for a Stronger Community.” People attending the launch were giving plastic construction hats to hit home the point that they would be going to work to build that stronger community.

In addition to the Diaz couple, who both work for the successful Diaz Foods enterprise, guests heard from Milton Little, United Way’s president and CEO; United Way’s board chair Susan Bell as well as others who have benefitted from and supported the organization.

During the event, Barbarella Diaz emphasized to the audience that the $75.5 million will allow United Way and its partners to make an impact on the lives of thousands of people living in the 13-county metro area.

“This campaign season, René and I look forward to working with United Way to drive innovation and impact across the Greater Atlanta region,” she said.

Atlanta’s United Way, one of the largest in the nation, invests in more than 200 programs in 13 counties through the Community Impact Fund and connects people with the resources they need.