With a focus on equity and the revitalization of Auburn Avenue, a ceremonial groundbreaking was held Wednesday for Front Porch, a $30 million project spearheaded by the nonprofit Historic District Development Corp.

“Sweet Auburn is one of our city’s most historic neighborhoods,” Atlanta Mayor Andre Dickens said at the event. “This is the first project of this magnitude on Auburn Avenue in about 15 years. It should be transformative.” 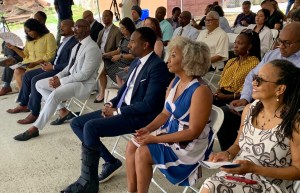 The Front Porch development is multifaceted. It will have affordable retail and commercial spaces, including the renovation of the Haugabrooks Funeral Home into a speakeasy and arts space.

The plan includes 22 units of affordable co-living rental housing, 23 micro-units and studio units — nine of which will be categorized as affordable — and 16 for-sale condos ranging from one to three bedrooms, four of which will be affordable. The project also will include a 9,000-square-foot rooftop event space with a community garden and room for health and wellness classes.

The project is being built on vacant land and developed around two existing buildings that will remain in third-party ownership.

“This development is a true commitment to holistic reinvestment,” Khaliff Davis, senior director of the Reinvestment Fund — Southeast. “I would not minimize the hardships HDDC faced when working to put community first.” 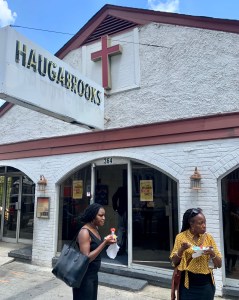 The Front Porch development complements the transformation of the historic Haugabrooks Funeral Home into an arts and cultural center with a speak easy. (Photo by Kelly Jordan.)

Several speakers mentioned the complexities in putting together the project including financing, timing and working with multiple partners.

Most of the affordable units will be priced between 60 and 80 percent of area median income (AMI). The mayor was encouraged by the development’s commitment to affordability.

Nathaniel Smith, founder and chief equity officer of the Partnership for Southern Equity, said it was important to remember those who had been part of Auburn Avenue, mentioning Rev. William Holmes Borders and Ralph David Abernathy among others.

“There are many unnamed people in this community who have transitioned,” Smith said. “We should never forget their sacrifice.”

Then Smith lamented the fact that there had not been more philanthropic support for the project.

“There was not one foundation in Atlanta that provided financial support for this development. We have to lift up our nonprofit development community,” Smith said, adding on a more optimistic note that Front Porch was “going to be a development that heals and repairs our community.”

HDDC was founded in 1980 by Coretta Scott King, Christine Ferris and John Cox to protect and revitalize the area around the King Center and the birth home of Martin Luther King Jr. 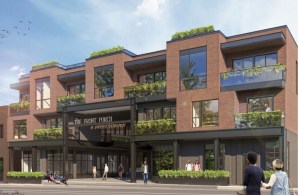 A rendering of the Front Porch redevelopment (Special: HDDC.)

Mtamanika Youngblood led the organization for about 35 years with goals of preventing displacement, preserving the historic character of the community and creating sustainable mixed-income, mixed-use development.

Along the way, Youngblood realized the necessity of building in permanent affordability into developments because almost all of the affordable housing units she was able to develop did not stay affordable as families sold their homes.

Eloisa Klementich, president and CEO of Invest Atlanta, acknowledged the presence of Youngblood, who flew in from her current home in California to attend the groundbreaking. Youngblood said the Front Porch development will have permanent affordability through the land trust model.

Cheneé Joseph, the current president and CEO of HDDC, thanked Youngblood for her decades serving the organization.

“Please do not forget that the reason we have a beloved community is because of Sweet Auburn. We know this was not easy,” Joseph said. “The best is truly yet to come.” 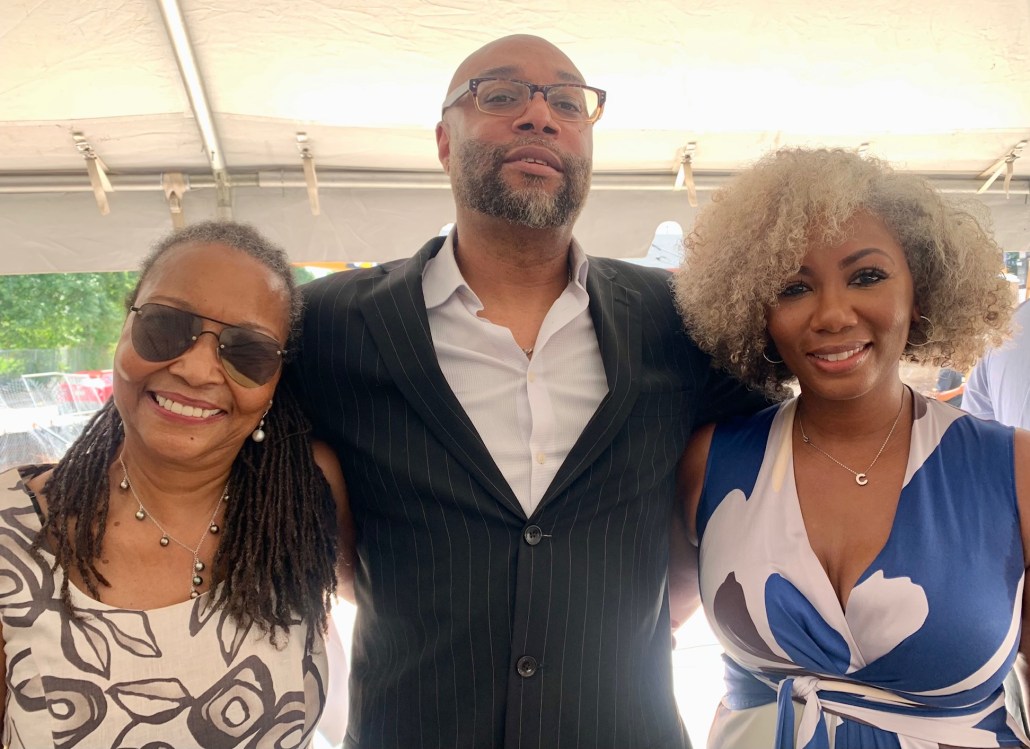