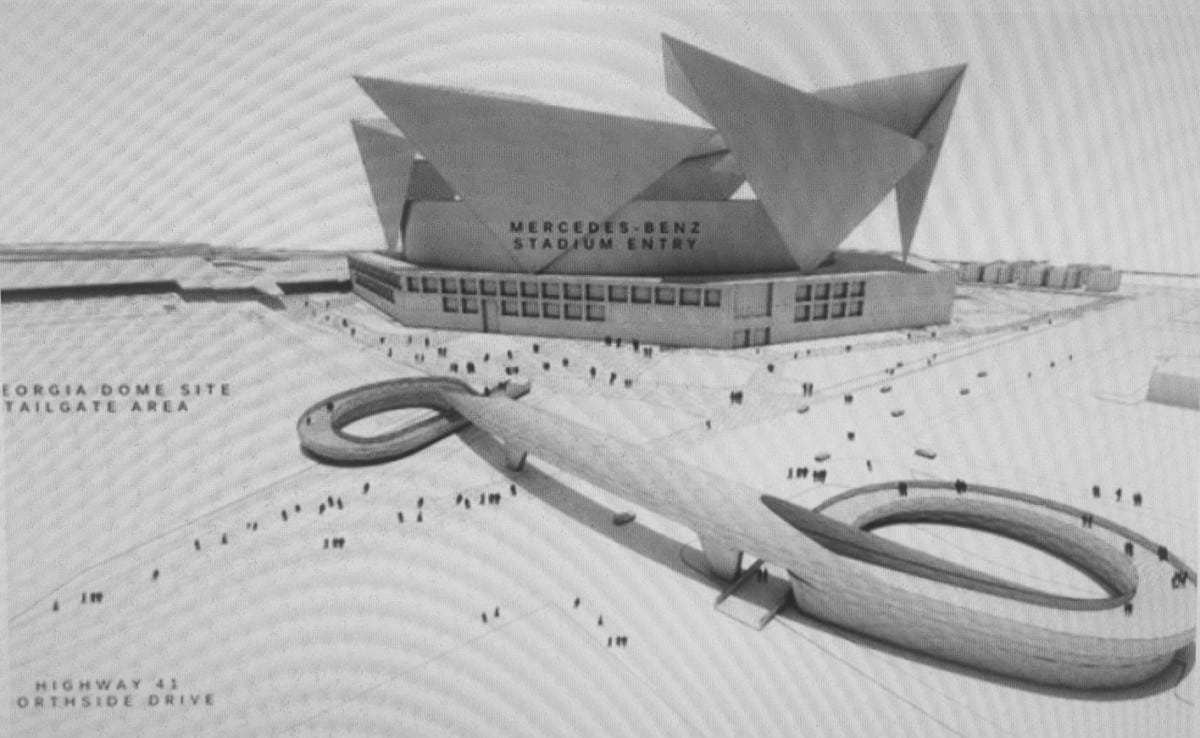 For over 30 years Northside Drive has separated westside residents from the jobs and vibrancy that continue to grow in Downtown Atlanta with a physical wall of traffic and pavement as if to emphasize the race and class divisions that plague the neighborhoods it bounds.

In a forum at the Atlanta Community Food Bank on the evening of Sept. 26, community members from Vine City and English Avenue heard from Central Atlanta Progress and the PATH Foundation on plans to upgrade the access, character, and quality of Northside Drive and improve its links to the Mercedes-Benz Stadium and beyond.

CAP presented a street-plan that, while modest in scope and scale, is likely effective in impact. Northside would include landscaped medians and 15-foot wide sidewalks, with uniform lighting and regularly spaced trees, matching what is now the standard in Downtown, Midtown and Buckhead. Pedestrian crosswalks would be demarcated and highlighted at intersections along its length, specifically across from the stadium, between Rhodes and Mitchell Streets.

The consultant’s traffic analyses confirm that this treatment would strategically buffer traffic, improving safety and access without reducing throughput. Game and other event-generated traffic would be managed by police, enabling directional traffic flows for arrival and departure times, just as it is now.

Perhaps more important, CAP and the community recognize the urgency of seizing this moment when attention and resources are focused on the stadium area, along with the benefits of encouraging more community involvement going forward.

PATH has a long history of communicating with the neighborhood while trying to find a suitable and technically feasible path for off-street bike-ped trails connecting the westside neighborhoods to downtown. Originally imagined as the Vine City Promenade, now funded mostly by the Georgia Department of Transportation and recast as Westside Beltline Trail, the project runs from Washington Park to Northside Drive and is proceeding toward construction. 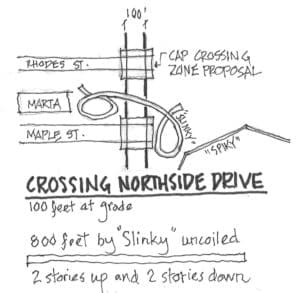 The proposed bridge above Northside Drive looks like a Slinky walking spring toy as it connects with the spiky appearance of Mercedes-Benz Stadium. Credit: Mike Dobbins

PATH’s original plan for getting to Downtown ran east from Magnolia Street up the hill to Andrew Young International Boulevard at the Georgia World Congrees Center, and from there directly into Centennial Olympic Park. The Mercedes-Benz Stadium, however, extended the great wall of the Congress Center another quarter mile through the former site of Friendship Baptist Church and severed MLK Drive.

At the meeting, PATH updated its progress on alternate routing, crossing Northside and travelling north along its east side, level across what is now a bus drop-off for the GWCC, to a humanized, less bleak Ivan Allen bridge and then on to PATH’s planned Luckie Street bike route.

Both CAP and PATH seem to recognize that the Northside barrier needs to be breached, its hardships mitigated, and that they can take advantage of their positions to leverage the opportunity a $1.5 billion publicly subsidized stadium provides. In letting residents’ concerns inform their plans, PATH and CAP seem to be offering an open line of communication, at least an olive branch to a community that long ago earned it.

The City and the Falcons, on the other hand, hold barely a fig leaf to cover the deals and public funds that now seem to be committed to an unnecessary, costly, and over-designed bridge over Northside. At a cost approved by city council at just under $13 million, this project, though green-lighted by council in July, demands deeper scrutiny. 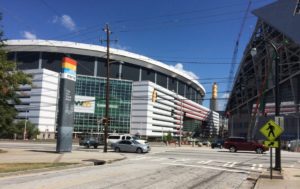 The proposed pedestrian bridge across Northside Drive to Mercedes-Benz Stadium stretches about 800 feet to cross this section of roadway. Credit: David Pendered

Bridges that require climbing and descending two stories to cross 100 feet of street have proven nationally to be utter failures in serving pedestrian needs. Bridges that cross on the level from one active destination to another at an upper floor, on the other hand, while diminishing street life where it exists, can work. Witness the bridges that connect the hotels in the Peachtree Center area.

The proposed Northside bridge edifice, though, has the look of a “Slinky,” with ramps coiled on either side of Northside. If uncoiled and straightened out this structure would extend about 800 feet – think of it as almost two blocks of climbing up and downhill to cross the street.

A reasonable analysis of this proposal would include:

Off the top, then, might there not be better neighborhood-serving applications for those kinds of dollars? Its context adjacent to some of Atlanta’s lowest wealth neighborhoods with the most neglected infrastructure, whose straits seem finally to be a concern of movers and shakers, would suggest that the answer is: YES. To put the city’s commitment of $15 million to such a project, to what end, flies in the face of the city’s repeated pious assurances of how it cares for its Westside neighborhoods. Consider what $15 million means: 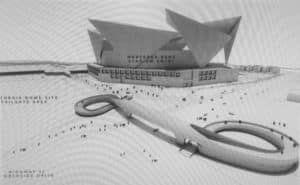 CAP and PATH noted that their plans, however practical and sensible for getting across Northside Drive, at this point have zero funding. I’ll bet that if the City put up a million or two, GDOT would build the CAP and PATH plans, greatly improving Vine City and English Avenue connectivity to Downtown and Midtown, greatly improving the travel experience for all and especially pedestrians, and launching a grand boulevard for shaping the city’s future.

All they would have to do is scuttle “Slinky” the bridge, move a little of the money to implement what would really work, and apply the remaining $11 million, since it seems to be available, to some of the above neighborhood-serving projects. What do you think?