Back from Harvard, amidst detritus of Vietnam, Plemon El-Amin had a spiritual Moment 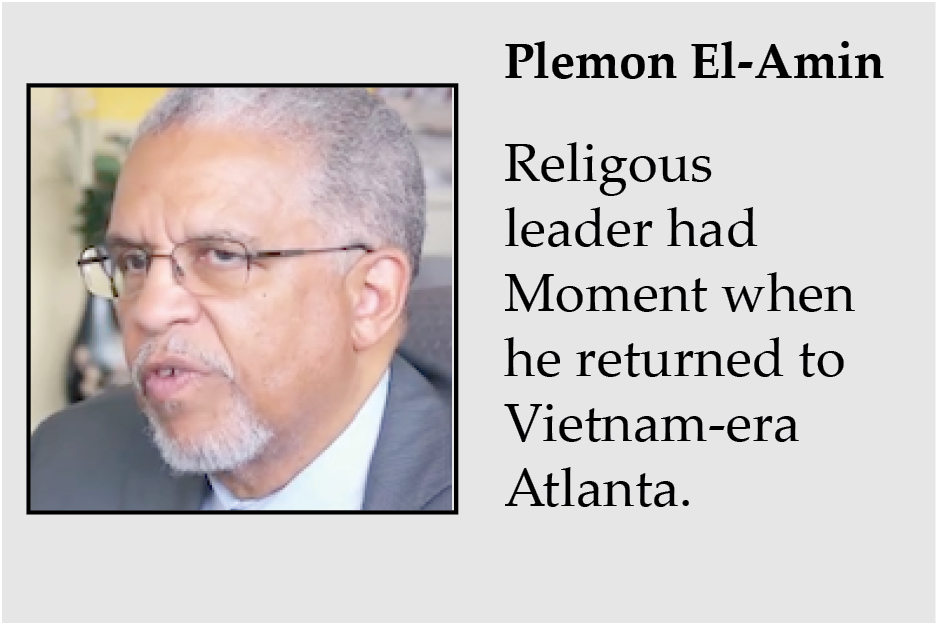 Imam Plemon El-Amin looks back now over his 33 years as leader of one of the region’s largest mosques, as well as the largest Muslim educational program in Atlanta that he helped establish. The Atlanta native traces his conversion from Christianity to Islam as a Moment after he returned from graduating at Harvard in 1972 and found his community devastated by the drugs and physical scars of the Vietnam War.

Growing up near Spelman and Morehouse colleges in southwest Atlanta, schools his family traditionally attended, Plemon sensed he had a broader view of the world so he applied and was accepted at Harvard, MIT and Princeton. He returned to a city in which “my friends were coming back from Vietnam addicted to heroin, or handicapped or in body bags.”

He owned and operated a paint store, and helped with his family’s construction company, but he grew increasingly troubled at the political unrest engulfing the country. He was a member of Providence Baptist Church, “an intellectual Christian congregation which included members such as Benjamin E. Mays, who was a frequent speaker. But the church didn’t have an answer for what was happening around me.”

“Drugs – especially hard drugs such as heroin – coming in from Southeast Asia, were killing our community,” Plemon said. “So I began to study other religions and I found that the Nation of Islam had been an influence to get people off drugs.”

He was aware of the organization’s upcoming national conference but he wasn’t planning on attending – until the day before when news broke that its 42-year leader, Elijah Muhammad, had died. Grabbing a good seat, Plemon watched as Elijah’s son, Wallace Deen Muhammad, spoke to the mourning attendees, summing up his father’s legacy but calling for reforms, including expanding membership to whites and other non-African Americans and aligning the religion with more of a world view that there is one supreme God who unites all religions.

“Finally I saw what my soul was searching for,” Plemon said of his Moment.

“This really expanded my thinking. It made everything fall into place and led me to understand that I shouldn’t be looking for reparations for the slave experience, but that God used enslavement to create a new people free of the historical excuses of why I can’t do this or I can’t do that – people who can see themselves as those who didn’t want any injustice, not only for themselves but for other people. This was the same spirit as Dr. King came in touch with from a different way, but I could see it from an Islamic perspective. So I began to pray five times a day and fast in the month of Ramadan and took a pilgrimage to Mecca with five million people.”

Plemon became a trusted aide of W. Deen Mohammed, who died in 2008, spending years traveling with him and meeting leaders all over the world. He also got active locally, joining the Atlanta Masjid of Al-Islam, becoming its resident imam in 1985 and growing what was a facility with 200 members to its current location near East Lake with 2,000-plus members.

He also helped to re-establish a dormant Islamic elementary school and later started a high school – the only Islamic one in the region. He has watched with pride as 21 classes of students have graduated – all 350 students entered colleges around the country. His own son and daughter graduated from the high school and each went on to Harvard.

He has been an active interfaith trailblazer in Atlanta. He is one of four faith leaders inspiring positive change via the Higher Ground group, and has been an active sponsor of World Pilgrims, which has led 300 people of all faiths from Atlanta to other parts of world, including Turkey, Jerusalem and Jordan. “We took one group to Egypt just 60 days before the Arab Spring. We could tell something was going on!”

Next month, Plemon will host the North American Interfaith Convention in Atlanta. For more information or to register, click here.

Next week in Moments: Rev. Joseph Roberts, who followed “Daddy” King in the pulpit at Ebenezer Baptist Church and stayed for 30 years.