Behind the scenes at the Governor’s Mansion, the “people’s house”

This week guest contributors JENNIFER DICKEY and CATHERINE LEWIS, history professors at Kennesaw State University, discuss the history of the Governor’s Mansion and its occupants.

By Jennifer Dickey and Catherine Lewis

As he was leaving an event at the Governor’s Mansion in Ansley Park in 1963, C&S Bank president Mills Lane was nearly struck on the head by a stone that broke loose from the porch. Lane had long been an advocate for a new Governor’s Mansion to replace the house in Ansley Park that had served as home for Georgia’s governors since 1924; the close call with the falling stone was, for him, the last straw.

Built in 1910, the Ansley Park residence, known as the Granite Mansion, had been home to eleven governors and their families. By the early 1960s, however, the Granite Mansion was in a terrible state of disrepair. Originally designed as a single-family home, it was poorly suited to the requirements of an executive residence.

The current mansion was “inadequate,” Lane said, and it was high time that the state built a proper residence for its chief executive that “would serve a triple purpose — a home, a state exhibit with the public invited to some sections, and the provision of badly needed office space.” Although the proposed new Executive Center, as it was originally known, was expected to cost $1 million, Lane prophesied that “in view of the multi-purposes, it would be extremely modest. It would be a showplace to put the South’s best foot forward — an investment in Georgia’s future.” 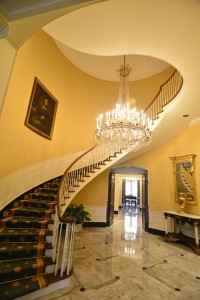 Main staircase of the Governor’s Mansion. Photo by Christopher Oquendo

The battle to obtain funding for the new mansion, along with the search for a suitable location, continued for a year after Lane’s pronouncement. Among the sites considered for the new mansion was the Inman family home known as the Swan House. First Lady Betty Sanders pointed out that the Swan House, with its “bad plumbing and small kitchen,” offered little improvement over the Granite Mansion in Ansley Park. Secretary of State Ben Fortson, she recalled, was vehemently opposed to the state acquiring the Swan House: “We don’t need any damn Italian villa as a governor’s mansion,” he declared.

Eventually, the 18-acre location on West Paces Ferry Road was selected, largely “because it was the largest tract of land we could find in an area of the city that’s not going down,” according to Fortson. Thomas Bradbury, who had overseen the 1957 renovation of the state capitol, designed the neoclassical mansion with its 30-column colonnade to evoke southern charm and grandeur while accommodating all of the functions required of the state’s chief executive. In addition to family living quarters, Bradbury included a state reception hall on the first floor, a basement ballroom large enough to accommodate the members of the state legislature, whom the governor hosted each year, and second floor office space for the governor and first lady. 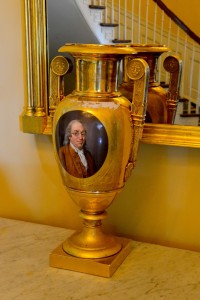 Construction of the mansion began in the summer of 1965, and in July 1966 Governor Carl Sanders created the Fine Arts Committee, chaired by Henry D. Green, to oversee the furnishing and interior decoration of the mansion. Green was well known for his expertise in the decorative arts, and he, along with the committee, agreed to focus on collecting American furniture of the Federal period, much as Jacqueline Kennedy had done in her restoration work at the White House in the early 1960s. Mansion curator Kitty Farnham recalled that Green’s mantra was, “Don’t worry about the cost. Tell me if it is quality!” For the next 18 months, the Fine Arts Committee assembled one of the finest collections of Federalist-period furnishings in the country, prompting President Jimmy Carter to declare that “it was kind of a step down for us to move to the White House. The collection in the Governor’s Mansion was simply that good.” 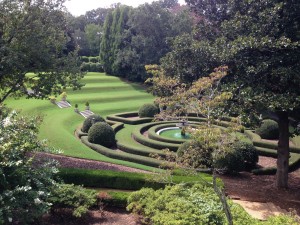 Grounds at the Governor’s Mansion. Photo by Christopher Oquendo

Governor Lester Maddox and his family moved into the mansion in late 1967. The Maddoxes considered the mansion to be the “people’s house,” and they opened it to the public for tours, a tradition that has continued with every first family. The mansion has fulfilled the visions of Mills Lane and Ben Fortson. Governors have hosted red-carpet events for myriad dignitaries and green-carpet events that have been instrumental in the economic development of the state. The mansion has also been home for eight families since 1967. Each of them agrees with the sentiment of Joe Frank Harris, Jr., son of Governor Joe Frank Harris, who explained, “You understand that it’s a privilege, a blessing, and it’s temporary. You are just a caretaker here for a very short period of time.”