We must galvanize to improve economic mobility in our region

At the Beloved Benefit dinner on July 7, there was a newspaper journal at everyone’s seat that shared the following statement:

“A child born into an impoverished Atlanta family has just a 4 percent chance of escaping their financial circumstances in their lifetime.”

During the program, Atlanta Mayor Andre Dickens picked up on that theme. 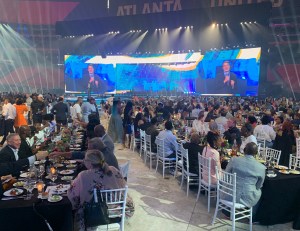 People filled the entire field of the Mercedes Benz Stadium for the 2022 Beloved Benefit on July 7. (Photo by Kelly Jordan.)

“We have the greatest income inequity than almost any other city,” Dickens told the attendees. “What we are talking about here today is economic mobility, Economic mobility is a game-changer. It’s how families have gone from renting to owning their homes.”

After the event, I thought it was time to drill down on both economic mobility and income inequality — two issues that are obviously interconnected. So, I called Mike Carnathan, head of research at the Atlanta Regional Commission, to better understand both statements.

Metro Atlanta’s numbers were dismal. Only 4.5 percent of children went from the lowest income rung to the highest, giving metro Atlanta a rank of 49 out of the top 50 metro areas in the country.

The only city that had lower results than Atlanta was Charlotte, which ranked 50th with only 4.4 percent of children going from poverty to the highest income rung.

That ended up being a wake-up call for Charlotte’s leaders, who galvanized around a common vision — to improve economic mobility for their metro area.

Several organizations, including the Foundation for the Carolinas, partnered to bring Raj Chetty and his team back to conduct deeper research that could lead to solutions. They produced a 2020 report, the Charlotte Opportunity Initiative, that identified tangible ways the community could improve the economic mobility of its residents. 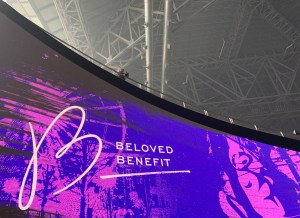 Beloved Benefit returned after missing two years because of the pandemic. (Photo by Kelly Jordan.)

Because the Charlotte community has been focused on economic mobility issues, there’s a strong possibility that its numbers have improved, which means Atlanta could be dead last.

Carnathan said the income inequality rankings are just for the City of Atlanta, not the metro area. And Atlanta’s record is by far the worst among the top 100 cities in the country.

In a 2019 analysis, the National Equity Atlas took the ratio of household incomes in the top 5 percent versus the bottom 20 percent. Atlanta’s score was 20.21, the highest in the country by far. The next closest city was New Orleans (No. 2) with a rank of 17.25. The city with the lowest rank was Aurora, Co. with a 6.17.

Because that is an issue for just the City of Atlanta, which represents less than 10 percent of metro Atlanta’s population, let’s focus on the regional economic mobility figures.

Before the pandemic, Raphael Bostic, president of the Federal Reserve Bank of Atlanta, gently challenged the Atlanta community to follow Charlotte’s lead with a coordinated response to metro Atlanta’s dismal showing.

“I think we were on the cusp of something,” Bostic said in a recent interview. “Then the pandemic stunned everybody. Larger, more ambitious goals got put on the shelf. When you think about that moment and that energy, I think the opportunity is still there, but it will require restarting the engine.”

Bostic, who is marking his fifth anniversary in Atlanta, holds key leadership roles. He chairs both the Metro Atlanta Chamber and the board of United Way of Greater Atlanta. 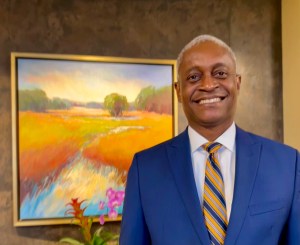 Raphael Bostic, president of the Federal Reserve Bank of Atlanta, would like to see the region explore ways to improve metro Atlanta’s economic mobility ranking. (Photo by Maria Saporta.)

Those are two of the four major entities in metro Atlanta that have a regional purview. The two others are the Community Foundation for Greater Atlanta and the Atlanta Regional Commission. So, to address the low economic mobility outcomes in metro Atlanta, it will take a regional response to tackle that effort.

“I’m not sure that it’s necessary to bring Chetty [of Harvard] here,” Bostic said. “I think Charlotte’s report and roadmap success could be a guide for Atlanta. But Charlotte’s experience demonstrates that the most important thing might be for the key parties in the region, which definitely includes at a minimum the four you cite, to come together and demonstrate a commitment for progress on this front.”

We have an opportunity to focus our regional resources on improving economic mobility in metro Atlanta — and it will take leadership at the regional level to rally behind a cohesive initiative.

First, we have to understand the actual facts and develop the metrics where we can measure outcomes and be able to monitor true progress. The Atlanta region has an opportunity to tackle one of our most embarrassing rankings, but it will take all of us working together to develop solutions.

Previous Article
A look back at the summer of love
Next Article
Are gas prices the leading indicators they used to be?