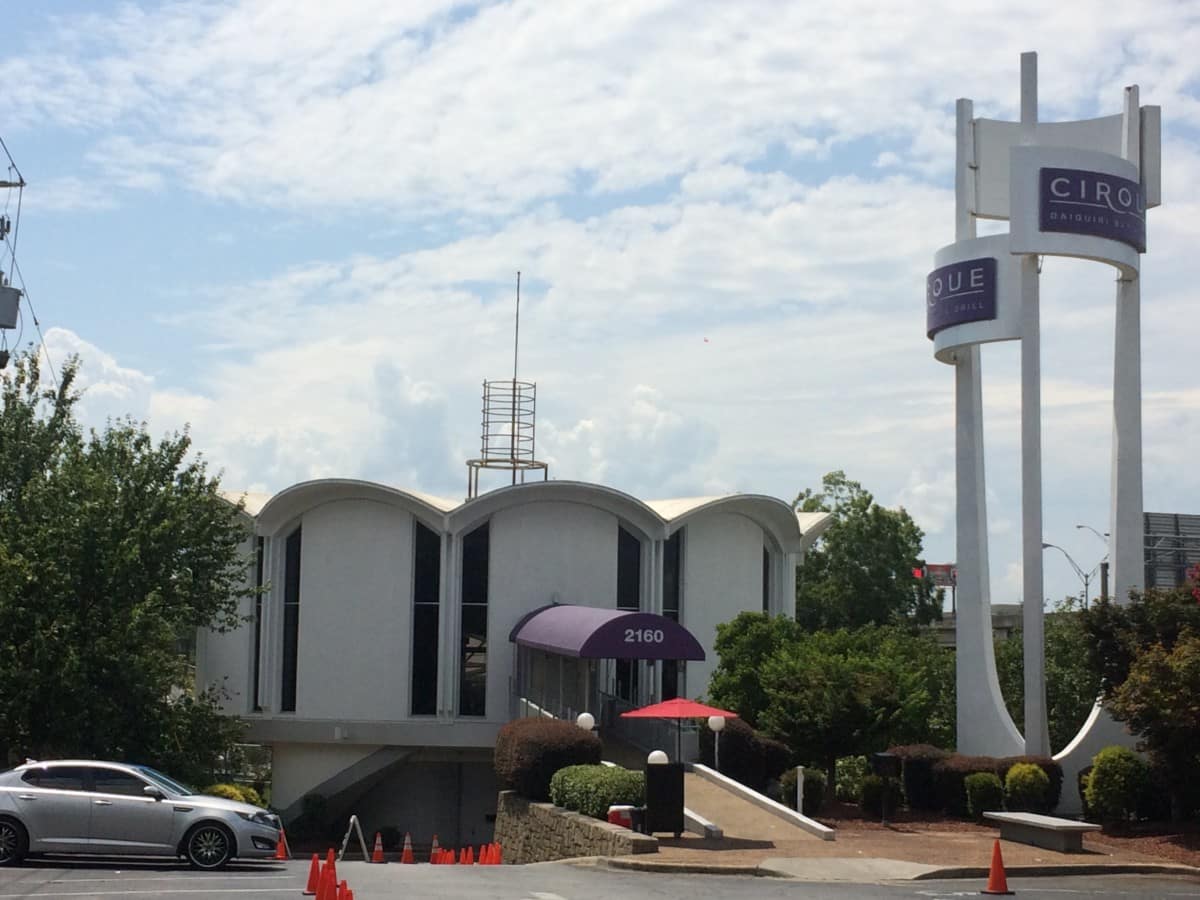 Following an outpouring of support for Henri Jova’s round bank building on Monroe Drive, the Atlanta BeltLine Design Review Committee Wednesday afternoon failed to support the building of a multi-story, self-storage facility on the site.

The BeltLine DRC had reviewed the proposal at its July meeting, and it had asked the developer to come back after making some slight revisions to its site plan.

But the tone had changed by Wednesday’s meeting. 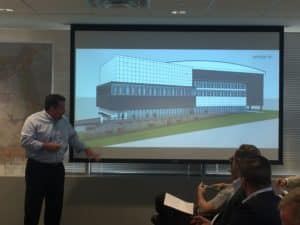 John Colclough, a broker with Self Storage Group, points out changes to the site plan for a storage facility at 2160 Monroe Dr. (Photo by Maria Saporta)

Every member of the BeltLine DRC who spoke said the former Trust Company Bank building should be given historic landmark status – a recommendation made in the BeltLine Master Plan.

John Colclough, a broker with the Self Storage Group who said he was a part-owner of the property, acknowledged after the meeting that “there’s a lot of real strong feelings” about the building, and he told preservationists that he would be happy “to discuss what our alternatives are.”

But he stopped short of saying they would give up on their plans to build a self-storage facility on the site.

We have developed a lot of different properties,” he said. “At the end of the day, we have usually made most of the people happy.” 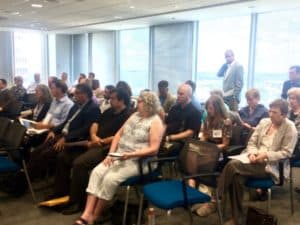 The BeltLine’s meeting room was packed with people wanting to express support for saving the bank building, which is now the restaurant and bar – Cirque.

At the beginning of the meeting, Fred Yalouris,, the Atlanta BeltLine’s design director, told the people present there would be no public comment at the meeting.

But committee member Hamilton then read a letter from the Georgia Chapter of Docomomo, a national organization committed to the conservation of buildings of the Modern movement.

“The Georgia Chapter of Docomomo, together with the national organization, strongly encourages that the Atlanta BeltLine DRC, the City of Atlanta, and the property owner and developer work towards a preservation­based solution that will retain the Trust Company building and reinforce the recommendations of the Atlanta Beltline Master Plan,” the letter stated.

Jeffrey Robinson, another architect representative on the committee, said the building has been around his whole life. As the son of an architect, Robinson said he was raised to appreciate quality architecture.

“I’m definitely in support keeping the building,” Robinson said. “The building appears to be in excellent shape.” 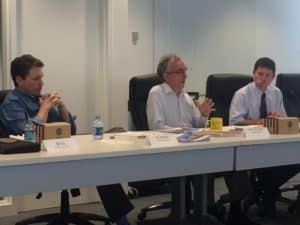 Johanna McCrehan, a representative from the ABI Tax Allocation District, also said the committee needed to consider the highest and best use for the site.

“We do not support self-storage units in the BeltLine overlay area,” she said. “I support it as a landmark.”

Julie McQueen Price, an urban planner representative on the committee, said the design of the proposed storage facility was nicer than some, but she still couldn’t support the project.

“Unfortunately we did not know about this landmark status in the BeltLine sub-area Master Plan,” she said.

The proposal is one of several for new self-storage facilities along the BeltLine, and Wednesday’s meeting gave the DRC an opportunity to weigh in on that kind of development along the multi-use corridor.

“We want to reiterate our concern on the proliferation of self-storage units along the BeltLine,” Yalouris said. “We stand by our recommendation that the Trust Company Bank building be designated a landmark.”

Among the people who showed up to support saving the round bank building was Stanley Daniels, who was a business partner of Henri Jova in the Jova/Daniels/Busby architectural firm. But he had submitted a letter to the committee to express his thoughts. 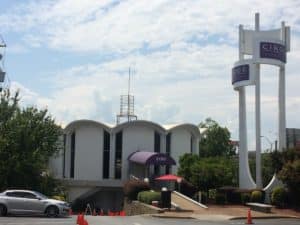 “Henri Jova designed the Trust Company Bank when he was a senior designer at Abreu & Robeson,” Daniels wrote. “A few years later, Henri, John Busby, and I established the architectural firm of Jova/Daniels/Busby.  Henri and I worked together for nearly 50 years.  In the beginning, the Round Bank helped to establish our credibility – but, more importantly, even years later, when we had many other buildings in our portfolio, we would get calls asking if we had been involved in the round bank and citing it as a favorite building.

“I think that many people feel an affection for this unusual building and would miss it if it were destroyed.  How many buildings elicit such an emotional response? NOT MANY!  And to replace it with WHAT?,” Daniels continued.

To further hit home the point, David Southerland, executive director of AIA Atlanta (American Institute of Architects), also wrote a letter on behalf of his members to preserve the round bank.

Here is an excerpt from his letter:

The building is an icon of the city, having been selected in 2006 by AIA Atlanta as one of the 100 most important buildings in the region – and profiled in the pages of the Atlanta Journal Constitution. It has been the winner of numerous architecture awards during its lifetime, and was designed by Henri Jova, who later in his career was recognized as a Fellow by AIA – one of our highest honors for a career of design excellence.

And its very design makes it incredibly rare and unique, and is an important representation of notable architecture from the 1960s. This former bank checks many boxes for historic preservation: an important architect, recognition for design excellence, and a special place in the history of architecture.

The building was included in the Atlanta BeltLine Master Plan as a preservation priority in 2011, as recommended by the AUDC, with the goal of listing it as a local Landmark. AIA encourages this Committee to remain committed to this goal and ensure preservation for this irreplaceable building.

If there is anything the members of AIA Atlanta can do to support this work of your organization, please do not hesitate to ask.

If the developers decide to continue to pursue a “Special Administrative Permit” for the self-storage facility on the site, it would have to submit its plans to the City of Atlanta’s Bureau of Planning, which would then send it to the Neighborhood Planning Unit – F to review.

If the DRC, the NPU and the city’s Bureau of Planning opposed the project, developers still would be able to submit an appeal to the Board of Zoning Adjustment.

On the other hand, preservationists  are going to try to get the building designated as a landmark – both by the City of Atlanta and by the National Register of Historic Places. Because the round bank building is older than 50 years old, it would be eligible.

Here are three photographs from the Lane Brothers Collection, dated between May 1961 and Feb. 1962: 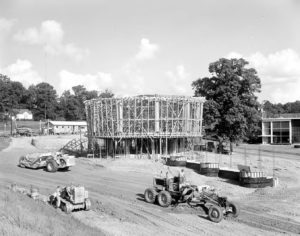 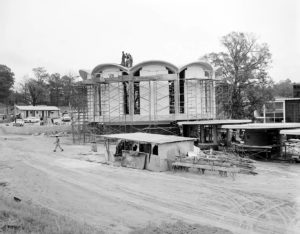 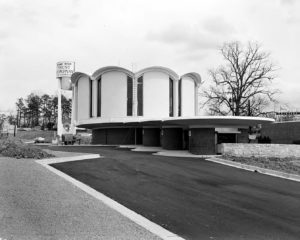 Here is an advertisement that ran in the Atlanta Constitution on March 14, 1962: 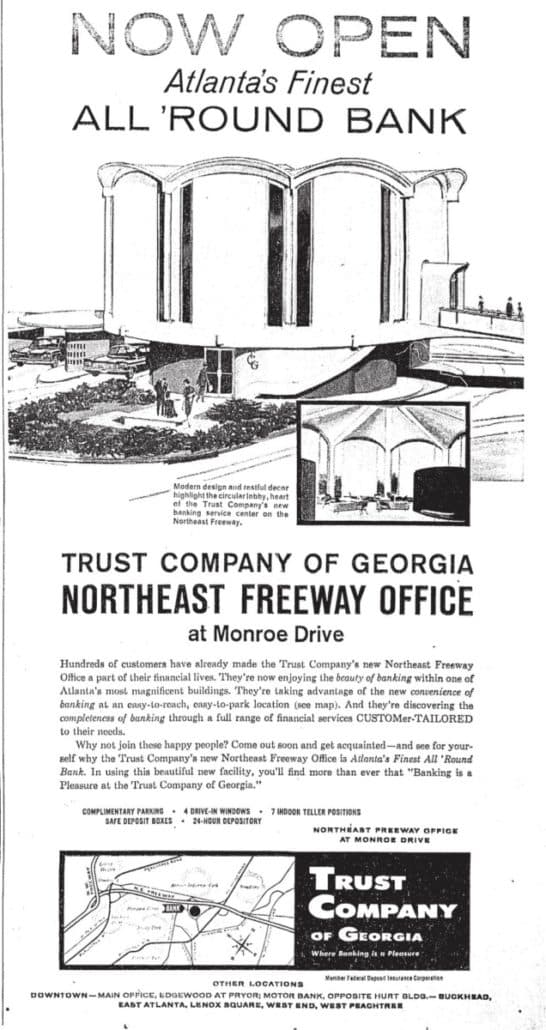