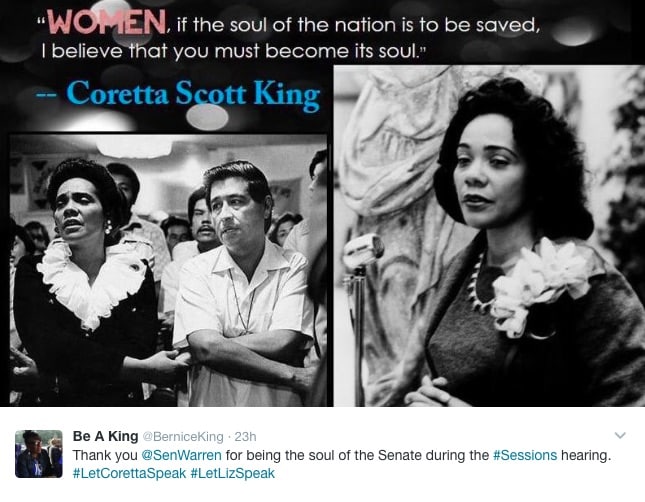 The words of Coretta Scott King are breathing new life after U.S. Sen. Elizabeth Warren (D-Ma.) was silenced by her colleagues Tuesday night while reading a 1986 letter from the civil rights leader objecting to Jeff Sessions becoming a federal district court judge.

For Warren, the words were especially meaningful at this moment in time when the U.S. Senate was preparing to vote on whether Sen. Sessions should become the nation’s next Attorney General. 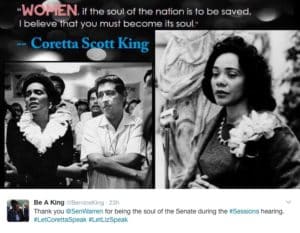 A tweet from Bernice King about her mother’s letter objecting to Jeff Sessions in 1986.

But she was not allowed to finish reading Coretta Scott King’s letter because Senate Majority Leader Mitch McConnell (R-Ky.) shut her up because he said she was impugning the character of a fellow senator.

Bernice King, CEO of the Atlanta-based King Center and the youngest daughter of Martin Luther King Jr. and Coretta Scott King, immediately responded to the attack against Sen. Warren.

She posted her thoughts on Facebook; she sent out tweets and she released a statement Wednesday afternoon.

And Bernice King also talked about the whole experience after attending the reception to say farewell to WXIA anchor Brenda Wood during her last broadcast. 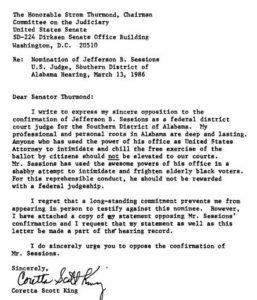 “It is timely that her words appear this year – which would have been my mother’s 90th birthday,” Bernice King said. “It is also the year we released her memoir. She was the architect of the King legacy. She did so much in her lifetime and championed so many different causes. She carried it with grace and dignity.”

Ironically, even though Warren was silenced, several other senators then used the occasion to read the letter by Coretta Scott King. That magnified King’s words – which she had written 31 years ago – than if the Senate had just allowed to Warren to finish reading the letter.

It is even more poignant when one remembers when Coretta Scott King died on Jan. 30, 2006.

Bernice King said her mother didn’t really like being known as just Martin Luther King’s widow. “She wanted people to know she was more than a widow,” Bernice King said. “She really was his confidante, his advisor. They were so synchronized with each other.”

She also said had shared her sentiments in tweets she had sent out on Tuesday and Wednesday. Playing off a quote from her mother – “Women, if the soul of the nation is to be saved, I believe that you must become its soul.” 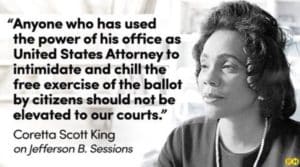 Bernice King then tweeted: “Thank you @SenWarren for being the soul of the Senate during the #Sessions hearing.”

She also tweeted out part of the letter her mother had written against Sessions back in 1986. “Anyone who has used the power of his office as United States Attorney to intimidate and chill the free exercise of the ballot by citizens should not be elevated to our courts,” Coretta Scott King wrote.

After making those comments, the King Center sent out a statement from Bernice King about her mother and about Sen. Warren attempt to read her mother’s letter.

The profound voice and leadership of Coretta Scott King, my mother, a global peace advocate and a human rights activist, still resonates today. Her letter regarding Senator Jeff Sessions, written 30 years ago, yet still prolific, should propel us all toward a commitment to eradicating all systemic injustices. Further, the letter should remind us that she was much more than the widow of a world leader who was a drum major for justice. She was, in her own right, before she married my father, Dr. Martin Luther King, Jr. and after his death, a powerful force for good and a purveyor of engaging peaceful means for creating a more just and humane world.

Coretta Scott King was also a women’s rights activist who opposed physical, psychological, and all other forms of violence against women. She advocated for the inclusion of women in every critical arena of society, including government. I firmly believe that my mother would consider it an affront to women and humanity that Senator Elizabeth Warren was silenced and prevented from reading her letter, while male members of the Senate were permitted to read that same letter. These actions on our Senate floor reflect the continual blight of a patriarchal order in our nation and world.

We can still learn invaluable lessons from my mother’s life. I encourage everyone to read her memoir, ‘My Life, My Love, My Legacy.’

Most of all, in the spirit of my mother, I encourage people to not only resist policies that oppress and dehumanize, but to also work toward forming bipartisan coalitions that help build the Beloved Community. The struggle continues.

As my mother stated, “Struggle is a never ending process. Freedom is never really won – you earn it and win it in every generation.” We will win freedom.

During the 2017 King holiday weekend, Bernice King was part of a Jan. 13th panel to talk about her mother’s memoir along with Barbara Reynolds, who helped put the book together based on conversations she had had with Coretta Scott King.

“I want people to really understand that Martin King, when he was assassinated, he was one of the most hated men in America,” Bernice King said. “And now he’s one of the most loved in the world. That was her work.” 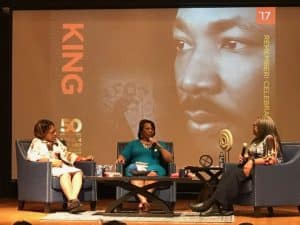 Bernice King (center) talks about her mother’s memoir with Barbara Reynolds, who helped write the book posthumously (left) and Joselyn Dorsey, who served as moderator (Photo by Maria Saporta) 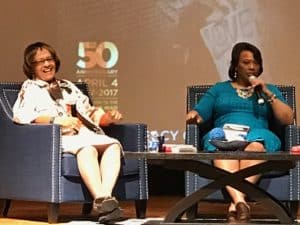 Barbara Reynolds and Bernice King on a panel discussing the memoir of Coretta Scott King – “My Life, My Love, My Legacy” (Photo by Maria Saporta)