It’s a reunion of sorts.

Both Marcus and Blank announced in mid-February that each were donating $20 million to the Gary Sinise Foundation Avalon Network, an organization started by the actor who starred at Lt. Dan in the movie “Forrest Gump.”

In a Zoom interview on Feb. , Marcus talked about the significance of their gifts to the Sinise Foundation and what it means personally and philanthropically. 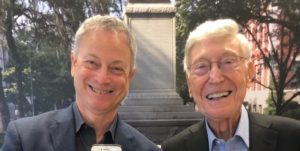 “It’s been great having Arthur around,” Marcus said. “We’re working hand-in-hand on this one. It’s great to have Arthur back again. I love him, and he loves me. It’s nice. It’s like a reunion.”

For the past eight to nine years, Marcus has been focused on helping veterans overcome their wounds – physical as well as mental – through Operation Share and the Marcus Institute for Brain Health in Aurora, Co. “After three years, we have the numbers that show that 95 percent of these people are able to go back to a normal life,” Marcus said.

The Gary Sinise Foundation Avalon Network will build on that work as well as the Boulder Crest Foundation’s Warrior PATHH program to establish 20 treatment sites nationwide to serve thousands of veterans, first responders, and their families. 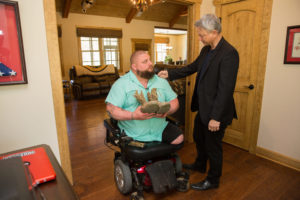 Marcus said it made sense to team up with Gary Sinise, who still gets stopped by people who remember him as a double amputee in “Forrest Gump,” amazed he can walk and that he has both legs. Marcus said Sinise is totally committed to helping veterans and first responders in need – building them houses, treating their post-traumatic stress and helping keep their families together.

Sinise’ work has been so inspiring that both Marcus and Blank teamed up to help launch the national network. They hope their $40 million gift – the first time the two have collaborated closely on a philanthropic endeavor – will lead to other donors to raise between $200 million and $300 million to build out the national network.

“This is going to be a monument to both of us,” said Marcus of him and Blank – believing they’ll be remembered for helping heal 10,000 to 20,000 people a year. “I don’t think of anything that could be better than this.” 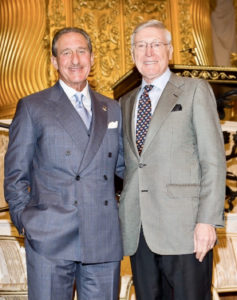 There has been an understanding between Blank and Marcus that they don’t solicit each other for their philanthropic initiatives. But the Gary Sinise Foundation was the exception – Blank did pledge at Marcus’ 90thbirthday celebration to give $20 million to help seed initiative.

“It’s been great having Arthur around and we’re working hand in hand on this one. So, it’s great to have Arthur back again. I love him, and he loves me. It’s nice. It’s like a reunion.”

Marcus, who will turn 92 in May, has always seen himself as Blank’s older brother. Blank is 78. Like most sibling relationships, it has been tested over the years.

“Arthur and I were together like almost 40 years ­­– longer than most marriages,” Marcus said. “Then we went our separate ways. I live mostly in Florida, and he’s up in Atlanta. In fact, we talked today. We try to get together, but it doesn’t always work out. We always had this relationship like brothers, and we care for each other. Every time we sit down and talk, it just picks up where we left off last time.

“But on other issues, he’s gone in one direction and I another. I’m conservative, and he’s liberal. So, on the political front, we’re kind of separated by our ideas. But when it came to the Gary Sinise Avalon Fund, we’re both on the same page.”

The Home Depot has had a tradition of serving veterans from the beginning. Marcus and Blank co-founded the Home Depot in 1978 after being both fired from the Handy Dan stores. 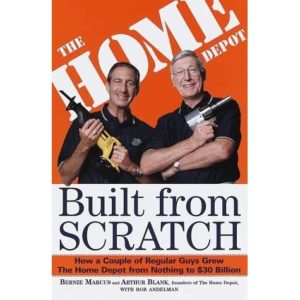 Marcus served as Home Depot’s CEO for 19 years while Blank served as president. When Marcus retired as CEO, Blank became CEO. Their co-leadership style at Home Depot was one of the strongest and most successful partnerships in American business. Each of them had complementary skills and personalities, and they shared a passionate devotion to creating a special culture at Home Depot.

Then in late 2000, the board decided to make former GE executive Bob Nardelli CEO of the company, and Blank retired as Home Depot’s co-chairman in early 2001. Marcus retired as board chair in 2002.

During that awkward leadership transition, Marcus and Blank became estranged for several years – a relationship that began to heal after Nardelli was removed as Home Depot’s CEO.

“Nardelli was the fly in the ointment. Constantly,” Marcus said during the Zoom call. “But you know you can’t break up 40 years of living together. It’s hard to break it up. Even Nardelli, as good as he was in breaking things up, he couldn’t break this one up.”

Marcus said he now spends most of his time working on his Foundation, which is focused on a broad spectrum of medical and health-related initiatives, including the Marcus Autism Center, Children’s Healthcare of Atlanta and Emory, Grady Hospital and Piedmont Hospital among others.

But Marcus said the foundation also is supporting clinical trials all over the country, including blood tests that can detect cancer as well as trials that use stem cells to treat arthritis and rheumatism.

“My foundation has been extraordinarily busy,” Marcus said. “I can’t tell you how many clinical trials are going on.”
Then Marcus reflected on how his life has come full circle.

“You know I wanted to be a doctor at one point. Today, I’m a doctor. People call me at least once a week saying I need somebody for this – like I’m a doctor,” Marcus said.

Marcus, who Forbes has estimated is worth $7.8 billion, seems amazed at how his life turned out.

“Listen. I love this country. I came from a tenement in Newark, New Jersey, as poor as I can be, to parents who didn’t speak English, and to be where I am today,” Marcus said. “This could only have happened in America.”

Bernie Marcus and Atlanta Mayor Keisha Lance Bottoms at the dinner “In Bernie’s Honor” on June 13, 2019 (Photo by Maria Saporta)

Marcus, who said he didn’t want to talk about politics, couldn’t help himself – saying former President Donald Trump deserves credit for the getting the COVID vaccines in place and that Trump would have gotten re-elected if it hadn’t been for the Coronavirus pandemic.

When asked what he thought about the Jan. 6 revolt on the Capitol in Washington, D.C., Marcus responded with four words.

Has Marcus told that to Trump, who still claims that he won?

“The answer is yes,” Marcus answered. “He lost. Biden won.”

Although he continues to be a staunch defender of former President Trump – especially his ramping up of the vaccines, Marcus did speak well of how Biden is doing.

“He wants to vaccinate everybody in America. I love it. Let him do it,” Marcus said. “This will be good for America. And whatever is good for America I’m in favor of that. If it’s good for Democrats or Republicans, who gives a crap about that.” 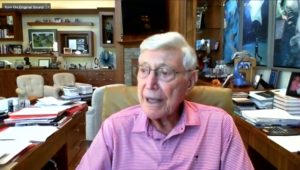 Bernie Marcus during the Zoom call on Feb. 24, 2021 (Screenshot by Maria Saporta)

Marcus said both he and his wife, Billi, have received both vaccines. They are living mostly in their home Boca Raton, Florida – spending time with friends who also have been vaccinated and playing golf. But during the 55-minute Zoom call, he kept fielding work-related calls related to his philanthropic work.

Marcus said he wants to live to 100 “at least,” and he intends to invest as much of his wealth on philanthropic causes as he can. The plan is for his foundation to be around for 20 years after he dies.

“My foundation is set up so that it starts paying down,” Marcus said. “After 20 years, it won’t be there.”

By comparison, he has set up “strict guidelines” for how his foundation will be managed for the rest of his life and beyond.

Asked if he would want to live another 20 years, Marcus laughed. “Well, that would be fine if I could do it and still know what I’m doing. I mean, that is key.”