Philanthropist Bernie Marcus, in a telephone interview, said countless lives will be saved by a state-of-the-art blood bank in Israel in a $135 million project led by the Atlanta-based Marcus Foundation.

Earlier this month, Israel dedicated the new blood bank center in Ramla, Israel. The sons of Bernie and Billi Marcus – Michael Morris and Fred Marcus – attended the dedication on May 2, which included such top Israeli officials as President Isaac “Bougie” Herzog. 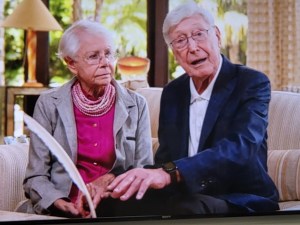 Billi and Bernie Marcus did not attend because of health reasons, but they participated in the dedication ceremony virtually. Bernie Marcus said he hopes to go next year “see the place when it’s in action.”

The center, which will open officially in July, is part of Magen David Adom (MDA), Israel’s paramedic and Red Cross service. The six-story facility (with three floors underground) will safely store nearly all of Israel’s blood donations to be used by civilians and the Israeli military forces, as well as people visiting Israel.

Marcus said he first became aware of the need when the medical director for the Marcus Foundation went to Israel’s existing blood bank.

“A missile strike could have wiped out the blood supply in Israel,” said Marcus, adding that during air raids they would not be able to keep all the blood safe. “I went there and took a look at it, and I was horrified to see it was as exposed as it was. It would have been a tragedy, not only for Jews but for Arabs and for the people who visit Israel.”

That was more than seven years ago, and Marcus knew he had to help Israel’s MDA build a more secure blood bank center. 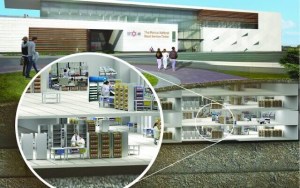 “We started the ball rolling,” said Marcus, who was able to get many of his friends in the United States to support the effort. “We decided to jump-start the project. All of a sudden it took on a life of its own. The government got the land for it. It took off.”

Initially the Marcus Foundation donated $25 million towards the project, and then it pitched in another $10 million to cover a gap. Other significant contributions were made by Miriam and the late Sheldon Adelson; the Leona M. & Harry B. Helmsley Charitable Trust; and Bloomberg Philanthropies, Michael R. Bloomberg’s charitable organization. Another 600 major gifts were donated by Americans, some 25 of which were each $1 million or more.

“I am so delighted to join you in inaugurating the Marcus National Blood Services Center, which embodies the most moving essence of our shared humanity,” Herzog said, according to a release. “To receive a blood transfusion – the irreplaceable gift of life – from complete strangers is a stark reminder that we are one living, breathing tapestry of humanity, now safeguarded in this impressive new center.” 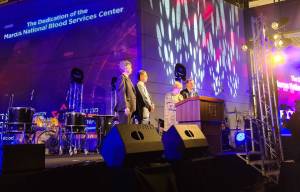 Michael A. Morris and Fred Marcus (the sons of Billi and Bernie Marcus receive honor on their behalf, for being the main donor in building the Marcus National Blood Service Center (Courtesy of American Friends of Magen David Adom)

Marcus said the center is “probably one of the best blood banks in the world.” Then he added: “Our point was helping the health and welfare of everyone, including the Palestinians.” The new blood bank center will be able to withstand missile, chemical and biological attacks, as well as earthquakes.  It will have room for 100 ambulances under a covered area. It will double Israel’s national blood supply, and it will supply every hospital in Israel – a life-saving endeavor.

“That’s what we do at the Marcus Foundation. We are looking to save lives every day,” Marcus said. “We are a very active foundation. We don’t talk a lot, but we do a lot.”

Marcus, who lives in Florida and Atlanta, just had a birthday on May 12. 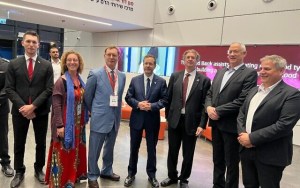 Marcus, co-founder of the Home Depot, fully retired from the do-it-yourself retailer in 2002, and he focused his efforts on philanthropy. His giving has focused on health care, hospitals and the Georgia Aquarium, as well as Israel. His biggest investment there has been in the Israeli Democracy Institute, which is a nonpartisan organization that seeks to bolster democracy.

“The country is amazing,” Marcus said. “I wish the world would stop fighting and start listening. And I wish the Palestinians would finally realize that war doesn’t work.”

Meanwhile, Marcus has been working on a book about his life and his philanthropy, which will be coming out later this year.

“There are a lot of good stories of how we go involved with different things,” said Marcus, adding that the message is to get more people involved with philanthropy. He also hopes the book will inspire readers to believe in the American dream, but he added “it’s not political at all.” Marcus is known for being a staunch Republican. 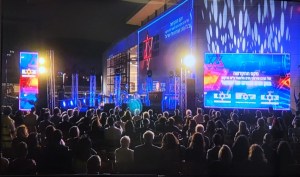 Marcus also commented on the new leadership at the Home Depot, which held its annual meeting on May 19. Craig Menear, who had been CEO, is now the company’s board chairman. Ted Decker is now Home Depot’s new CEO.

“Ted Decker has been with us for about 20 years,” Marcus said. “He’s very qualified for the job. He’s not a newbie. We have great leadership. It’s not just at the top. It goes down several layers. I’m very happy about what they did. The numbers are great.”

Marcus said Menear and Decker recently came to visit him in Florida to “bring me up to date” and Marcus also checks in when he’s in Atlanta.