At the dinner held at the St. Regis, Berry College President Steve Briggs announced that $70 million in commitments already have been made towards the “LifeReady: The Berry College Campaign for Opportunity.”

One of the campaign’s co-chairs is Barry Griswell, a winner of the Horatio Alger award, who grew up poor with a single mom. Griswell’s inspiring story of how he is now co-chairing his alma mater’s $100 million campaign is an example of the impact that Berry College can have.

Griswell, retired chairman and CEO of Principal Financial Group, was one of he speakers Saturday night. As a 1971 graduate, he understands the value of a Berry education. 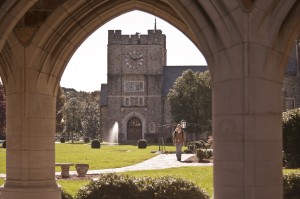 The current campaign will continue to combine Berry’s historic strengths of challenging academics with character-enhancing work and service experiences. Berry already has a national reputation as a premier liberal arts colleges.

Campaign projects are focused in three strategic areas: expand opportunities for students to invest in their own success, including scholarships that make it possible for students to work their way to graduating debt free; develop leaders and entrepreneurs with character and compassion, poised with strong work ethics and skills; and create places and spaces that spur student achievement in the arts, sciences and student life.

According to a release embargoed until Saturday night, Berry College said these projects are meant to further the college’s ability to produce graduates who are ready, willing and able to improve their homes, work places and communities.

“We are immensely proud of the Berry that exists today, yet we envision still a better Berry in the years ahead,” Briggs said in the release. “It has been said that a Berry education is timeless in approach, time-tested in results and timely in meeting the needs of society today. The improved Berry we envision involves not a change in course, but innovative progress in the same direction.”

In the four years leading up to Saturday’s official kickoff in Atlanta, alumni and friends jumpstarted the campaign by funding the Gate of Opportunity Scholarship Program, an initiative that makes it possible for students to work their way to graduating debt free. Spurred by a $10 million challenge grant from an anonymous friend, those efforts resulted in a total of $24 million in gifts and pledges, enough to eventually fund 130 of these special scholarships each year.

“With the assistance of early partners, we have already increased access to a Berry education,” said D. Randolph Berry, co-chair of the Campaign Steering Committee and great-nephew of college founder Martha Berry. “With additional support, we will extend access to life-building firsthand learning experiences for all students.”

In addition to scholarships, campaign priorities include mentoring programs aimed at helping students identify and capitalize on work, service, leadership and other opportunities available to them on and off Berry’s campus, as well as new centers for entrepreneurship and integrity in leadership. Capital projects include expanded facilities for Berry’s growing number of animal science majors and renovation of two historic structures that will provide first-class performance venues for theatre and music. A campus welcome center is also planned, along with a previously announced athletic stadium for football, lacrosse, and track and field.

The new animal science facilities will provide much-needed teaching and research space for a program that is now Berry’s largest major. Included is an addition to the McAllister Hall science building and construction of field research laboratories near the existing Rollins Ruminant Research Center and Gunby Equine Center. These structures will provide expanded opportunities for undergraduate student research – a unique aspect of the Berry experience that sets graduates apart when applying to veterinary school or other graduate programs or beginning a career.

Two historic structures – Blackstone Hall and Ford Auditorium – will receive major facelifts. Blackstone Hall, the first permanent brick building on Berry’s campus, was erected in 1915 and has served as home to the theatre program since 1982. Renovations and an addition include a new theatre, acting and design-studio classrooms, scene and costume shops, and other facilities.

Ford Auditorium is located in the iconic Ford Buildings – gifts from Henry and Clara Ford in the 1920s and 1930s. This English Gothic classic will be transformed into a modern recital hall with enlarged stage, enhanced acoustics, new seating and new performance-quality sound and lighting.

Speakers at Saturday’s kickoff included Barry Griswell, co-chair of the Campaign Steering Committee and retired chairman and CEO of Principal Financial Group. As a 1971 graduate, he knows well the value of a Berry education.

Berry College is an independent, coeducational college recognized nationally as one of the nation’s top “Up-And-Coming” liberal arts college, according to the 2014 U.S. News Best Colleges rankings.

It is located on more than 27,000 acres near Rome, i student body, and it has more than 2,200 undergraduate and graduate students.

In the interest of full disclosure, Maria Saporta is a member of Berry College’s Board of Visitors. She was not able to attend Saturday night’s dinner, but she felt the launch of the campaign was newsworthy, and she wanted to share it with her readers.