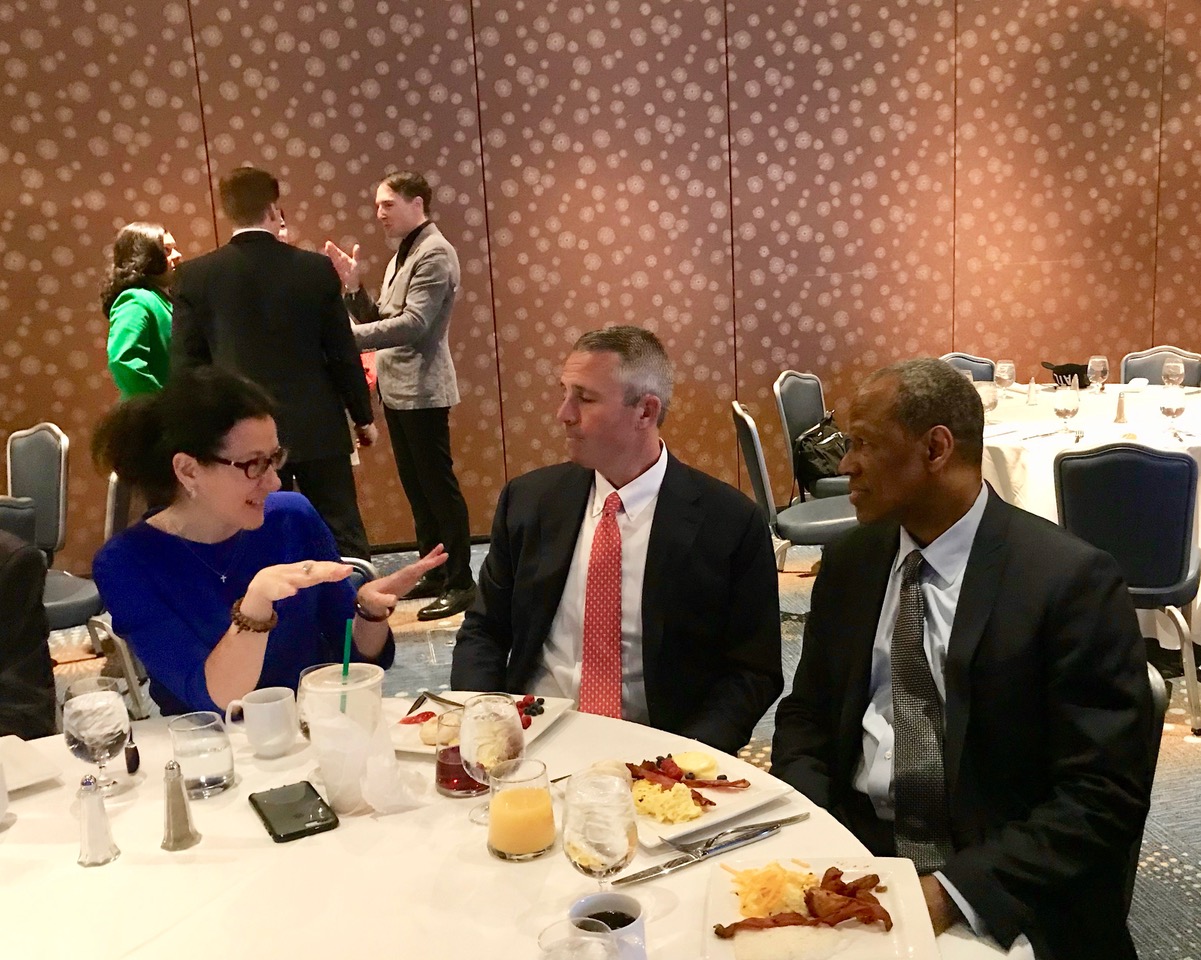 Local leaders are making progress in their quest to host the 2020 Summit of the Nobel Peace Laureates and on a larger vision to brand Atlanta as a “City of Peace”.

A delegation from the Permanent Secretariat of the World Summit of Nobel Peace Laureates and other Nobel-related entities came to Atlanta between May 1 and May 5 to meet with key stakeholders who would be involved with hosting the Summit in December 2020 as well as implementing the larger vision.

The delegation was led by Ekaterina Zagladina, president of the Permanent Secretariat of the World Summit of Nobel Peace Laureates.

“I found the visit totally inspiring,” Zagladina said after a breakfast with members of the Nobel Summit host committee at the Georgia Aquarium. “We still need some time to work on some details. But from a capacity point of view, I’m very optimistic.” 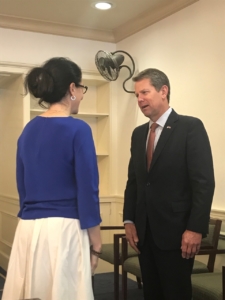 Ekaterina Zagladina, president of the Permanent Secretariat of the World Summit of Nobel Peace Laureates, meets with Gov. Brian Kemp (Photo by Bob Hope with his permission)

A high-powered group of Atlanta leaders has been working on the latest effort to host the Nobel Peace Laureates Summit for much of the past year. But the vision is far greater than just hosting one summit, according to those stakeholders.

Their vision is called the Atlanta Peace Initiative.

Among the goals being considered are for Atlanta to host regularly recurring World Summits of Nobel Laureates – whether it be every other year or every three to four years.

It includes having the North American headquarters of the Nobel Laureates organization. Creating a Nobel Peace District with a Peace Park at its core. And having a Nobel Peace University in Atlanta – one that would be a collaboration of leading educational institutions in Atlanta.

“I saw a city committed to peace,” Zagladina said. “We buy into the larger vision, but we need to work through the organizational process.”

Locally, the work is being led by Andrew Young, who is chair of Atlanta Peace Inc., the nonprofit that has been set up to oversee the multi-pronged effort. Bob Hope, a civic leader and public relations executive, is serving as CEO.

Atlanta Rotarians Clark Dean and Cannon Carr are co-chairing the Nobel Peace Summit Host Committee. Rotary International, an organization with 1.3 million members in 35,000 clubs in 200 countries, has agreed to partner with Atlanta on the effort.

Jim Hannan, CEO of Koch Enterprises, and Egbert Perry, CEO of the Integral Group, are serving as co-chairs of the Atlanta Peace Initiative, the entity that work on making sure there is community-wide business and civic support for the Summits and the larger vision.

“We have to get everybody – all the institutions – aligned around the vision,” Hannan said at the breakfast. “We have to do it with one voice to get it done.”

“The small working group did a great job of bringing some of the best of Atlanta together – to let them understand who we are and our ability to work together,” Perry said. “They were able to understand the collaboration and cooperation that exists, not just for the Nobel Summits, but the broader vision – and help Atlanta truly become a city of peace.”

Other local leaders also are involved in the effort. Laura Turner Seydel, a senior advisor to the Nobel Summit, will serve on the board of Atlanta Peace Inc.; and Ashley Woods, who has worked with several Nobel organizations, will be the lead liaison to the different Nobel entities.

While in Atlanta, the Nobel delegation visited with Atlanta Mayor Keisha Lance Bottoms on Wednesday morning. It then had lunch at the Carter Center, where it met with its CEO – Ambassador Mary Ann Peters. On Wednesday afternoon, it had a tour of the Georgia World Congress Center. And then there was a private dinner with key stakeholders. 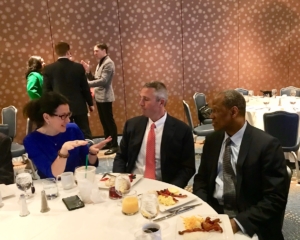 On Thursday morning, the delegation at breakfast at the Georgia Chamber of Commerce. It met with Jill Savitt, CEO of the National Center for Civil and Human Rights, at the destination. Then it had lunch at the Metro Atlanta Chamber with its CEO Hala Moddelmog before meeting with Bernice King, CEO of the King Center.

That evening, there was a reception put on by the World Affairs Council at Millennium Gate in Atlantic Station.

After the Friday host committee breakfast, the group went to the State Capitol, where it met with Gov. Brian Kemp. That evening it had dinner at the residence of the Japanese Consul General Takashi Shinozuka.

On Saturday, the group toured the birth home of Martin Luther King Jr. It had lunch at the Georgian Terrace, and it toured the Fox Theatre. That afternoon, it went on a tour of the Westside and saw Rodney Cook Sr. Park, which is under construction. That evening they attended a more informal dinner with Atlanta leaders, and the group departed on Sunday morning.

“I considered last week a huge success,” Perry said in a phone interview on May 7. “We would hope we would have essential conversations with them within 30 days.

Perry said the next step will be to negotiate a more formal Memorandum of Understanding between the Nobel Peace Secretariat and Atlanta Peace Inc. In the meantime, Perry and Hannan will continue meeting with “essential Atlanta-based organizations and companies” to make sure everyone is behind the effort.

Both Hannan and Perry said one of the big issues has been Atlanta’s past effort to host the Nobel Peace Summit in 2015. That effort was abandoned when friction developed between the community and the CEO of the failed effort, over governance and financial management.

“We all know there was an effort to do this in 2015,” Hannan said at the breakfast. “There was a lot of ill will. We are going to do this in a way to make sure we do not find ourselves in that situation again.”

Hannan said the reason he is supporting the effort today is because there has been a huge decline in civility, respect and dignity in our society.

“By launching this process, we want to create an ecosystem that can create solutions to these problems,” Hannan said. “The people we have talked to are excited about the vision.”