By Maria Saporta and Doug Sams
Published in the Atlanta Business Chronicle on Oct. 31, 2014

Atlanta’s oldest African American church — known for the blue “Jesus Saves” sign atop its steeple — wants to redevelop about 4 acres on its campus, in hopes of sparking more investment in the Sweet Auburn district — the cradle of the city’s civil rights movement.

Big Bethel is part of the historic King district, birthplace of civil rights leader Martin Luther King Jr. The church is a Sweet Auburn landmark — and pivotal to the area’s future. It controls 13 parcels and more than 7 acres at Auburn Avenue and Jesse Hill Jr. Drive, including 182 housing units known as “Bethel Towers.”

The scope of the proposed redevelopment could include more affordable housing; new apartments; the rehabilitation of existing commercial buildings on Auburn Avenue and the development of new mixed-use projects, according to the request for qualifications. 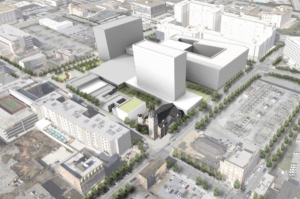 One concept for Big Bethel’s property along Auburn and Jesse Hill Jr. Drive on the block that includes Bethel Towers

One proposal included up to 367 apartments and the the rehabilitation of up to 26,000 square feet of existing church buildings.

The project would come as investment continues to pour into the adjacent Old Fourth Ward neighborhood and nearby Atlanta Beltline. The district is also benefiting from the growth of Georgia State University and the new Atlanta Streetcar.

The Streetcar, which will run through the district, is a powerful magnet for new investment, city officials say. It has sparked 23 real estate deals along its route, with the majority of those occurring in Sweet Auburn, said Jennifer Ball, vice president of planning and economic development with Central Atlanta Progress.

The church felt that it was time to act.

“We needed to position ourselves for development that would be generated as a result of the Streetcar,” said Charles Moore, first vice chair of Bethel Towers.

“The Streetcar is going to put a lot of life back in this community,” said Big Bethel church administrator Marvin Fleming.

In the ’50s, Sweet Auburn was a center of African American commerce and nightlife, home to establishments such as The Royal Peacock.

The area went through a long period of economic decline after the 1970s. It didn’t help that the Downtown Connector cut off the eastern and western ends of Auburn Avenue.

But, the early 2000s saw a resurgence in investment, led by Big Bethel and developers such as Egbert Perry’s Integral Group.

That partnership developed the mixed-use project Renaissance Walk. It was controversial, because it involved the partial demolition of several commercial properties along Auburn Avenue.

This time, Fleming said, “We really aren’t trying to tear down anything.”

Parts of Old Fourth Ward neighborhood have also seen a revival. The Edgewood retail district has opened several restaurants and bars. “Sister Louisa’s” has become one of its most popular hang-outs.

Over the past 18 months, the Old Fourth Ward has generated $684 million worth of projects either in planning or already under construction, said City Council member Kwanza Hall.

Big Bethel adds to that mix.

The seeds for all the new activity might have been planted several years ago during the first drafts of the Old Fourth Ward master plan. “The zoning has given landowners the ability to think big and to focus on quality,” Hall said.

The church, founded in 1847, has always played a prominent role in the district’s economic development. Its roots there date back to 1868. It also eventually became a center for action on important social issues.

The district’s struggles echoed those of other cities across the United States, as suburban housing and retail expanded.

“It’s such an historic area, and it went dormant for far too long,” said Melody Harclerode, president-elect of the American Institute of Architects in Atlanta.

Harclerode, who once worked for prominent Atlanta architect J.W. Robinson, believes Big Bethel’s project “can bring new residents to the area and a greater appreciation for the importance of the district.”

Previous Article
Little consolation for Democrats in election drubbing
Next Article
Column: Atlanta is ranked No. 4 city in the nation for philanthropy