By Maria Saporta and Douglas Sams
Published in the Atlanta Business Chronicle on August 8, 2014

Film and television studios surrounded by a performing arts center, a hotel, and a mix of residential, office and retail could transform the downtown Civic Center property into a regional tourist destination.

It is one of the more ambitious concepts to emerge so far as the city prepares to put the 19-acre Boisfeuillet Jones Atlanta Civic Center site on the market – yet another project that could ignite more downtown revitalization.

Carter, a leading Atlanta real estate developer, is proposing the concept. Bob Peterson, Carter’s chairman and CEO, said the firm is putting together a team that specializes in entertainment-oriented developments and movie-television production facilities. “The idea of studios with pre-production and post-production facilities, live TV and live audiences is not unique, but seeing that conceptually in Atlanta is new,” Peterson said.

Carter officials have had “a number of conversations” with a potential studio operator that he described as capable, reputable and financially sound. Peterson did not disclose the operator. 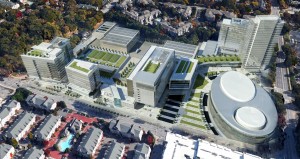 But Atlanta Mayor Kasim Reed, in a recent brief interview about the Civic Center, mentioned that he heard that Pinewood Studios had been one of the operators that had been approached about being involved with the project.

Carter’s proposal is one of several on the table.

“The interest in the Civic Center is off the charts,” Reed said during a press briefing in late July.

The city is in the process of naming a real estate broker to oversee the sale of property and help the city issue a request for proposals, or RFP, to developers.

“The time frame to retain the broker and release the RFP is approximately 45-60 days,” said city of Atlanta spokesman Carlos Campos.

Other development teams are forming to pursue the project, which could prove as powerful a catalyst for investment and renovation on the north side of downtown as Ponce City Market has been for the nearby Old Fourth Ward.

Ackerman & Co., which had the rights to redevelop the Civic Center as far back as the 1980s, is one of the real estate companies said to be considering a proposal.

Also, Transwestern, which ramped up its development business with the hiring of former Carter executive Trent Germano, is working with a planning partner on mixed-use concepts for the Civic Center.

The project is another example of how investors and developers have focused on redeveloping the urban core since the late 1990s. Last year alone, the city’s intown properties, including trophy buildings, mixed-use developments and apartment towers, attracted almost $1.4 billion in new investment, according to data from Real Capital Analytics, a New York firm that tracks real estate deals.

That’s the most since $1.9 billion in 2007, the last good year before the market collapsed.

Carter’s Peterson said his firm wants to be the master developer of the Civic Center property because it’s “one of the few large sites that’s easily identifiable within the city limits of Atlanta.”

Carter has been focused on “urban infill and mixed-used developments” that can become walkable communities, he said.

“It’s a good opportunity to add value to improve a community,” Peterson said.

Live studio audiences and TV studios overlooking public plazas also can become a tourist destination, so the proximity of the Civic Center to the downtown hotels is viewed as an added bonus.

Peterson added this redevelopment will help build upon Atlanta’s and Georgia’s growing reputation as a center for television and movie production. A privately held group of Atlanta investors has been “very interested in pursuing this concept,” he said.

Carter’s plans would include a new 4,000-seat, state-of-the-art performing arts center to replace the existing Civic Center, which was built in 1967.

It also would include street-level retail along Piedmont Avenue with residential towers on the northern part of the property, an office building, a couple of television studios open to the public, several private studios for pre- and post-production, a hotel and underground parking.

“We are very early in this process. It’s very conceptual at this point,” Peterson said, adding Carter is waiting for the RFP from the city. “We stand ready to receive that proposal and begin a much more serious analysis.”

Peterson said it would take “a lot of money to develop” this project and create a new “relatively dense” community over the next five years.

The project could easily cost hundreds of millions of dollars.

Reed recently estimated that selling the Civic Center property could bring between $45 million and $65 million into the city’s coffers, though that may be on the high end according to real estate executives familiar with the market.

It is not known whether that number anticipates the city needing to spend about $15 million to solve water drainage and retention issues on the site, which have been obstacles to development plans in the past.

The selling of the Civic Center land and other city-owned property is one of the recommendations of the city’s Commission on Waste & Efficiency, which included members of the Atlanta City Council as well as city employees, and business and civic leaders.

Reed said the Civic Center land is probably the biggest prize the city has to sell. Because it is such an important decision for the city, the mayor said he intends to get feedback from City Council members. The mayor wants to hear what they believe would be the best solution for the property.

“There’s a tremendous amount of interest in the Civic Center property,” Reed said. “The interest is just amazing.”