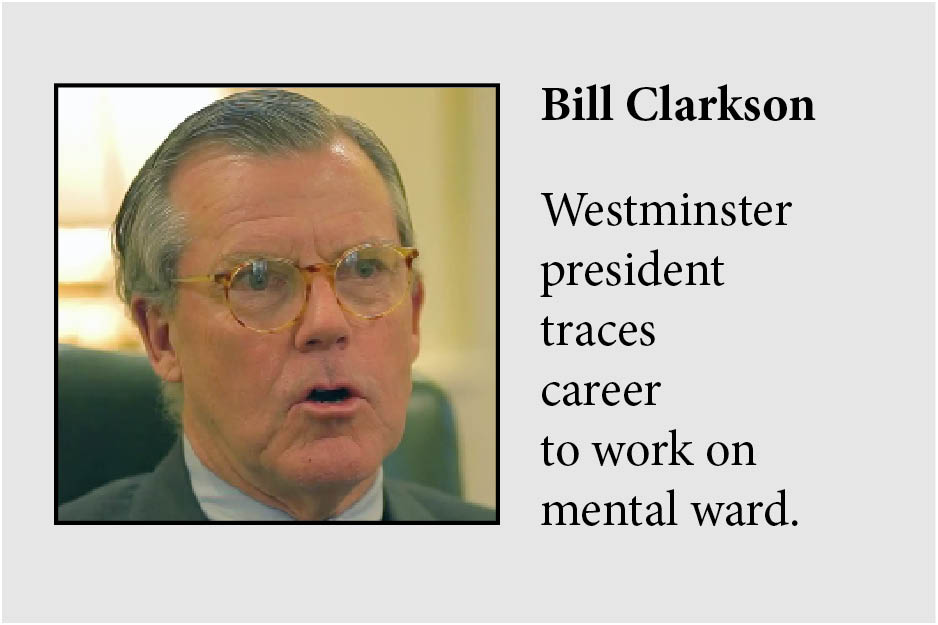 Bill Clarkson, who recently announced plans to retire after 23 years as President of The Westminster Schools, remembers the Moment that prompted and propelled his career as a chaplain, educator and administrator. It wasn’t in the hallway of a school or a church – it was in the hallway of a psychiatric ward.

Bill was an 18-year-old freshman at Duke University and, as a financial aid student, needed a part-time job to help pay for his undergraduate degree. He found the job at the University psychiatric hospital – a line of work that seemed to align nicely with his interest in pursuing a psychology major. He worked four-hour shifts as a psychiatric attendant three days a week.

“You got to wear a white coat and look pretty official, but basically you were there to aid the doctors and assistants,” Bill recalled in our accompanying Moments HD video.

A mere three days into his job, Bill was assigned a shift that would change the course of his career. He was assigned to sit within a “locked ward inside the locked ward of Meyer Ward” to observe a new patient. That patient’s name, Stanley (alias), still rings as clearly in Bill’s mind today as it did on that day in the Fall of 1970.

Bill was asked to observe Stanley’s behavior while they sat together in the locked ward – a long hallway with chairs and sofas along one wall for interaction with patients. Along the opposite wall was a row of empty, individual padded cells.

Bill, in his crisp white lab coat, watched as the nurses locked the door behind him, leaving the young freshman to sit alone with the 48-year-old tobacco farmer who had exhibited extreme manic-depressive disorder. The patient had had an initial dose of medication. Stanley pulled out a pack of Camel non-filter cigarettes, tore the pack open, stuffed all the cigarettes in his mouth, and then spat them out on the floor. Stanley looked up at Bill, waiting for a response.

“I said, ‘Stanley, I would appreciate you picking those up,’ ” Bill recalled.

Stanley looked at Bill and said authoritatively, “You are God, I am Jesus Christ, and there will be a trial this afternoon at 4 p.m. and I am free.”

Bill observed Stanley, then responded calmly: “Well that may be, but I would really appreciate it if you would pick up the cigarettes because somebody else is going to have to do it, and that’s not nice.” They each repeated their statements.

Then Stanley erupted and responded in a rage. He leapt out of his chair and began attacking Bill – swinging his fists and ripping at the student’s new lab coat. Bill recoiled, trying to crawl out of reach of Stanley’s blows. Finally, he was able to maneuver over to the buzzer to alert the nurses. Pressing the buzzer as many times as he could, Bill was astounded to discover that no one from outside the room responded to his call.

Suddenly, terrified, Bill stopped defending himself and exploded with a command to Stanley. He turned and yelled, authoritatively ordering Stanley to get in one of the padded cells.

“He stopped on a dime and said, ‘OK, but not because you told me to!’ ” Bill recalled.

Stanley went willingly into the cell and Bill locked him in. He then watched as Stanley proceeded to tear the mattresses in his cell to shreds. Finally, a few minutes later, the nurses ran in and administered medication to Stanley to sedate him. With Stanley safe in lockdown, Bill began to ponder the mystery of what had just happened to him.

Bill continued working at the hospital and studying psychology, but the lingering puzzle of that Moment continued to nag at him, eventually sparking an interest to study religion. Born and raised as an Episcopalian, Bill went through the typical church rituals and, like many other college students, wasn’t attending services regularly while at school. But in the months following his Moment with Syanley, Bill decided to enroll in some religion courses, eventually choosing to minor in religion.

“I just wondered where [religion] came from in context of a mental illness,” he said. “I soon became aware that psychology takes you to a certain depth or level, but then there is much more beyond that which I suspected was in the realm of the spirit.”

Bill became so involved with his religious studies that when he finished his undergraduate degree at Duke, he enrolled in the General Theological Seminary in New York City. While he admits he was afraid of the big city at first (he was only 21), it soon proved to be an invaluable three years.

Bill attended the Seminary, worked in Bellevue Hospital for a year, and taught classes at St. Luke’s Episcopal School in Greenwich Village. In 1973, he received his Master of Divinity degree and followed a new path.

“I would continue in pastoral care but determined to serve in schools as an ordained priest/chaplain,” he said.

Bill moved back to his home state of Texas and served as an ordained Episcopal priest and Episcopal Chaplain at the University of Texas at Arlington. He went on to serve as Chaplain to St. Mark’s School of Texas where he was also a history teacher, head of the religion department and the coach of several school sports teams.

Following a lengthy term as assistant headmaster and then headmaster at a school in Northern Virginia, Bill was selected in 1991 to be the fourth president of Westminster, a school founded 40 years earlier in Buckhead on 180 acres of rolling pine forests that now boasts 1,800 students and 10,000 well-connected alumni.

As a young high school editor at Westminster, I helped publish a front-page story reviewing the 22-year career of the school’s founding president, Dr. William Pressly. In July 2014, when Bill and his wife Lucille retire to a house in the mountains, he will be the longest-serving leader of the nation’s 24th largest private school – recently helping to grow its endowment to be the largest of any non-boarding school in America.

Under Bill’s stewardship, Westminster expanded the ethnic, religious, and racial diversity of its student body, faculty/staff, and Board. Bill has balanced the school’s continued academic excellence with an increasingly nurturing environment, gently steering the school into a more progressive era while sustaining the loyal support of both old and new constituents of the school.

Bill says it’s been an honor and a privilege to have led an institution – he humbly argues – that so many other leaders helped shape. As for Bill, Westminster has provided a challenging finish to a career that has balanced his love of ministry, teaching, and the nurturing of young people who will be gifted and caring citizens of the world.

“The combination of psychology and pastoral care – understanding how people think, and why they think and do what they do, but also the spiritual dimension connected alongside that – has really informed my entire career, and I wouldn’t give anything for it,” he says.

Bill traces his career path that eventually led him to Westminster to the Moment he had shared with Stanley in the locked hallway of Meyer Ward.

“It propelled me along a path that set my career in motion to put me here at this school,” he said. “I wouldn’t give anything for that point in time – even though it meant getting beat up a bit.” 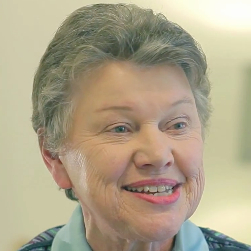 Next week in Moments: Ann Curry

Next week in Moments: Ann Curry, owner of Coxe Curry, on a very surprising lunch meeting that altered her career path.