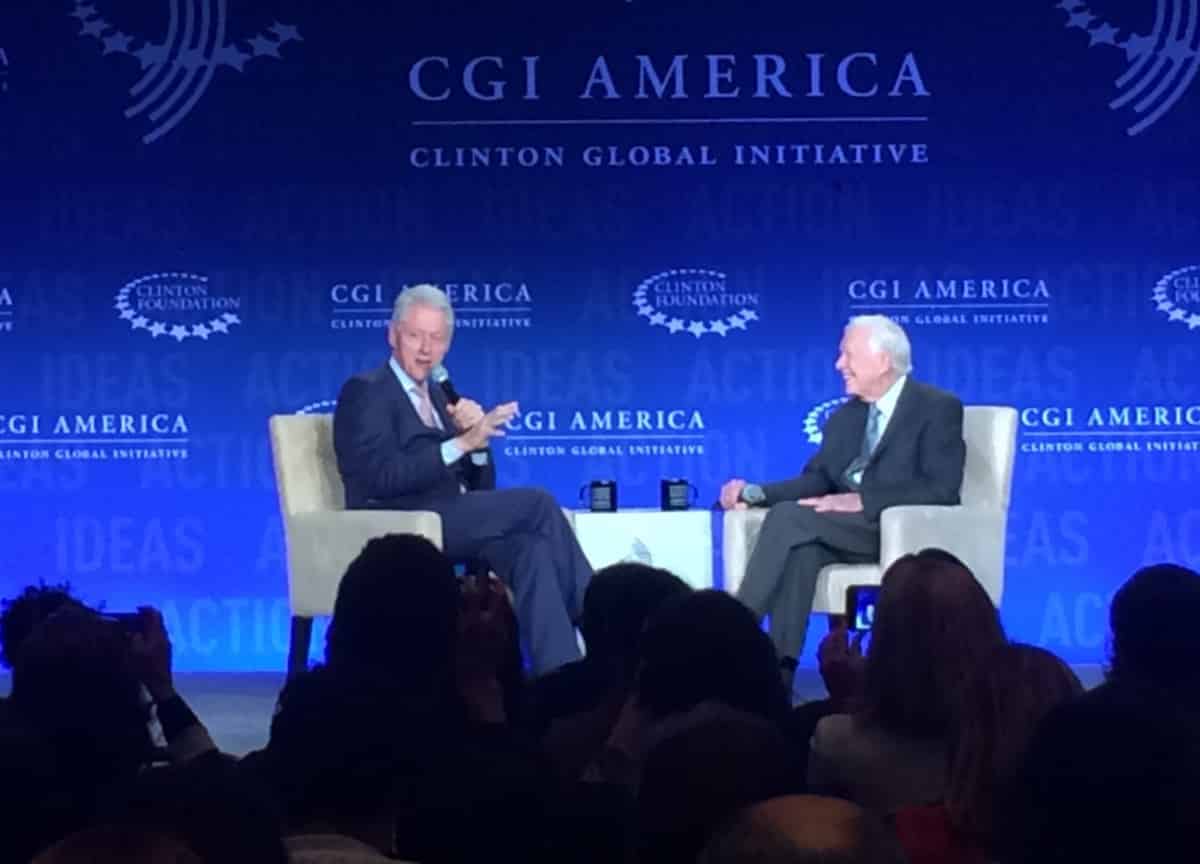 The venue was the Clinton Global Initiative America meeting at the Atlanta Marriott Marquis, where nearly 1,000 leaders from around the country have been convening since Sunday.

The conversation between Clinton and Carter culminated the event – and provided a window on two leaders who have made the most of their post-presidencies.

“Both of us have been blessed to live far longer out of office than we did in office,” observed Clinton.

“It didn’t take me long to live longer than the time I was in office,” Carter, a one-term president, quickly chimed in. “I was good at being elected, but not good at being re-elected.” 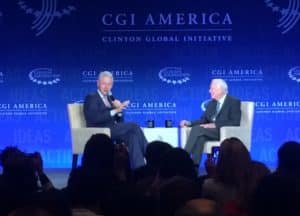 During their conversation, Clinton and Carter talked about drug abuse how it has been a reason for the over-population in the nation’s prisons.

Clinton said there’s great agreement that drugs should be treated as an illness.

Carter agreed – adding the priority should be to get people out of prison. “That’s the kind of job the next president – himself or herself – can do,” Carter said.

The audience laughed at the obvious reference to the campaign of former Secretary of State Hillary Clinton – now the presumptive Democratic nominee for president.

But her husband sidestepped any references to her or the current presidential race.

Instead Clinton repeatedly asked Carter questions about his ideas on how to improve the country.

“You’ve got me answering all the questions, but I don’t mind,” Carter said, adding that one area of concern is the declining number of people who vote. “If I had my preference, you would automatically be registered to vote when you turn 18.”

When he was governor of Georgia, Carter said he deputized every high-school principal so the would be able to register their students to become voters. When he became president, he tried to introduce that idea nationally, but there was pushback on both sides of the aisles because elected leaders didn’t want to change their constituencies.

Clinton said he favored how California had established citizens panels to redraw legislative districts – a move that was encouraging more bipartisan efforts.

Carter took it one step further. “The dramatic change that has occurred since we were in office is the stupid decision by the Supreme Court – Citizens United,” he said. “I think an enlightened Supreme Court would go a long way to reducing the polarization.”

He went on to say we should just use public funds for the general election races and the public financing of campaigns.

“It would require a change in the Supreme Court,” Clinton said.

Back at the turn of the Century, Carter said his greatest concern was the increasing division “between rich people and poor people as well as rich countries and poor countries.”

Carter said some countries are now outlawing NGOs (non-governmental organizations), which is one more reason why nonprofits should work in harmony.

“I don’t think you and I have ever sat down together to see how CGI and the Carter Center could work together to fill the gaps,” Carter said.

Clinton did say that surveys have showed that Americans don’t have a base level of knowledge when it comes to civic education.

Clinton said America would be well served to send people updates on various facts, such as how much or little the nation spends on foreign aid compared to other countries, such as Norway.

Clinton also spoke on behalf of President Barack Obama, saying that the current president has tried to reduce tax shelters for the wealthiest individuals.

“I don’t think there’s any question that the service life you have lived since you left the White House is why you look so good and you are in such good shape,” Clinton told Carter.

“One thing I’ve learned is that extremely poor people are just as smart as other people,” said Carter, who learned that lesson while volunteering with Habitat for Humanity International. “Everyone is equal in the eyes of God.”