Bill Taggart’s service to be held Friday at 11 a.m. at Morehouse’ MLK chapel 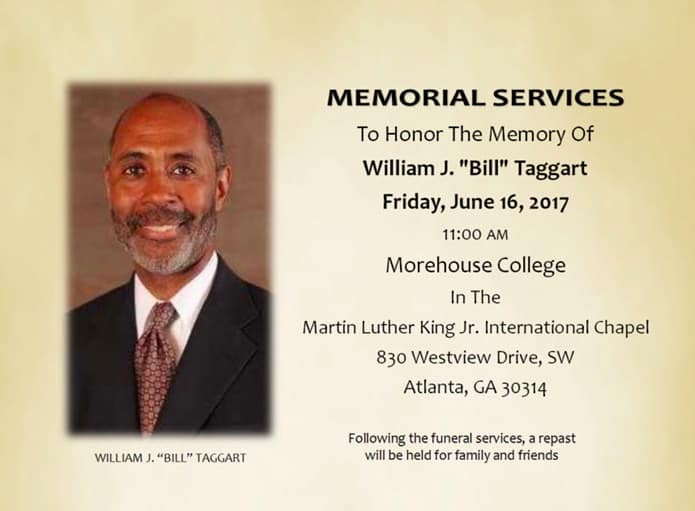 Memorial services for William “Bill” Taggart, an Atlanta business and civic leader who died suddenly on June 7, will be held on Friday, June 16 at the Martin Luther King Jr. International Chapel at 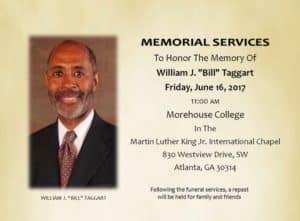 Since April, Taggart had been serving as the interim president of Morehouse College after having served as the institutions chief operating officer for the past two years.

He also held several important roles in the community, such as chairman of the Atlanta Business League and on the board of the Westside Future Fund.

Morehouse officials will be available both before and after the service to talk about the future of historic institution.

Here is an obituary written by the family about Taggart’s life:

William “Bill” James Taggart was born December 15, 1961 at Grady Memorial Hospital. Bill Taggart grew up the oldest child of three children in the Adamsville community of Atlanta, Georgia. He was preceded in death by his sister, Felecia Taggart and father, James Taggart.

Bill Taggart was the son of Marian Howard Taggart and James Taggart. Although Bill was raised in Adamsville, it was in his grandparents’ home on the west side that he developed lifelong skills.  His grandfather, Henry Howard, helped develop his analytical mind while teaching him complex math skills with everyday coins.  A devoted sports fan, his grandmother, Eliza, helped Bill develop a passion for Atlanta teams as they watched and analyzed televised Braves games together.  Bill’s family life included a large extended family of aunts, uncles, cousins, and friends.  They spent every weekend together at parties, playing music, or just engaging in spirited conversation.

Bill was a product of the Atlanta Public School system and attended L.P. Miles Elementary and Northside High School.  An honor student, his leadership skills enabled him to excel in many areas including ROTC, soccer and track.

Bill entered Howard University wide-eyed and excited.  Bill’s insightful mind and witty presence enabled him to immerse himself in a broad swath of the Howard community ranging from New York DJ crews to prestigious academic groups.  Bill also arrived at Howard with a disciplined and competitive spirit that made it possible for him to excel in all that he attempted, including acceptance into the Delta Sigma Pi business fraternity and Beta Gamma Sigma honor society.  Eventually, he would pledge his beloved Kappa Alpha Psi (Xi Chapter) providing a venue for him to express his “Wild Bill” attributes along with his academic prowess.  While at Howard, Bill developed a life-long collection of memories, achievements, and friends.

Affectionately known as “Dolla Bill”, he deejayed parties, played intramurals, and philosophized. He was a champion and confidant to many who found themselves in difficult situations.  When he entered HBS, disproportionate shares of African-American and international students were receiving lower grades due to the Socratic Method of instruction. While Bill easily mastered this method, he was part of a team which initiated the analysis which eventually led to the abolishment of the practice. Bill was always unafraid to speak truth to power. Bill’s legacy and footprint leave an enduring mark at HBS creating a more embracing and equitable environment for all.

When Bill completed his Harvard MBA, it was clear that management consulting was the perfect fit.  It requires a strategic mind, excellent communication skills and the ability to align people who do not report to you around a common vision and purpose.  Bill’s grace and charm enabled him to have meaningful and authentic conversations with people.  He listened, zeroed in on the problems and opportunities, then used his natural passion and authenticity to bring people together around the solution.  Those traits propelled him rapidly through IBM and Wachovia and continued to serve him throughout his life. 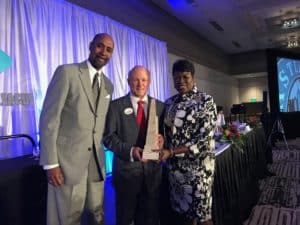 ABL Chairman Bill Taggart at the awarding of Chick-fil-A CEO Dan Cathy as ABL’s CEO of the Year as Leona Barr Davenport, ABL’s CEO, looks on  at event held on May 16 (Photo by Maria Saporta)

While a student at Howard, Bill had an opportunity to intern for the President Ronald Reagan Administration. This positive experience and excitement for the newly elected President Barack Obama led him back to civil service as the Chief Operating Officer of Federal Student Aid.  Leveraging his business acumen, visionary leadership, and optimistic outlook, he quickly set out his agenda to increase college access, affordability, quality, and completion. He made it possible for a 50 percent increase in the number of low-income students to attend higher education, enabling more than 9 million more low-income students to go to college.

Bill realized his dream of returning to his hometown of Atlanta when he became the CEO of Atlanta Life Financial Group. While in this role, he led the transformation of the 110-year-old firm creating financial stability and subsequent growth.

Bill loved Morehouse College as both her adopted son and her fervent leader. Over the course of two years, Bill held two positions at Morehouse: COO and executive-in-residence and interim president.

President Taggart brought his genuine care for young people, his leadership, and business skills along with his passion and networking talents to Morehouse daily.  His candid, yet optimistic style was both refreshing and welcomed by the entire Morehouse community. Every person who experienced Bill knew that he had come to the right place at the right time, and he worked tirelessly to move Morehouse forward.

Bill was a tremendous asset to the Atlanta community and was an authentic servant leader in every aspect of the word.  He was known for his passion, commitment, and desire to make an impact on his beloved city.  He was active in various business and civic organizations including:  100 Black Men of America and Rotary Club of Atlanta.   Bill also served on the board of Atlanta Business League, The Carter Center, Carver Bank, Children Healthcare of Atlanta, Emory Center for Excellence Advisory Board, Woodruff Arts Center and Westside Future Fund.  Bill was a life member of the National Black MBA Association and Kappa Alpha Psi Incorporated.

Bill ‘s personal life was rich with love, laughter and life lessons generously shared among family and a host of friends.  His life was enriched when he met and married Lydia Roston in 1998. Bill, Lydia, and Elizabeth, their daughter, led an extraordinary life.

With love as the center of their lives, their home was a place of encouragement, support, and fun.  In 2013, Lydia, his wife of 15 years passed away. Bill enjoyed every moment as a father to Elizabeth. Bill always shared his zest for life: from daily conversations on the way to school, cheering at Braves, Hawks and Falcons games, exploring Paris, taking an early morning safari in South Africa to spending time with friends and family in Israel and Nantucket.

Bill was blessed to find love again in his life with Wonya Lucas, a high school classmate. They shared many common bonds including their love for family, music, travel, Atlanta sports teams, and they worked together to create positive impact on their Atlanta community.

In lieu of flowers, donations can be made to “The Bill Taggart Memorial Trust for the benefit of Elizabeth Taggart” via Green Square Capital, 6075 Poplar Ave,. Suite 221, Memphis TN 38119 or to the “William J Taggart Scholarship Fund” at Morehouse College via 830 Westview Drive Atlanta, GA 30314.