A Black midwife’s southwest Georgia home is featured on the National Trust for Historic Preservation’s annual list of “America’s 11 Most Endangered Historic Places.”

The Georgia B. Williams Nursing Home in Camilla, a Mitchell County city about 25 miles south of Albany, joins other sites at “serious risk” of loss across the country on the list, which was released June 3. 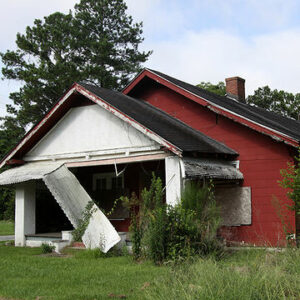 The home was used for “nursing” in the sense of caring for mothers and newborns. It was operated by Beatrice “Ms. Bea” Borders (1892-1971), who particularly served Black women in the era of Jim Crow racism and segregation. She is estimated to have delivered more than 6,000 babies between 1945 and 1971, and may have been midwifing as early as 1918. Borders worked with her mother — for whom the home was named — and her grandmother. According to the National Trust, they provided “the only known birthing center of its kind for thousands of Black women in the rural South during times of challenging economic and living conditions.”

After Borders’ death in 1971, the state closed the facility, which then became a daycare center for decades. Today, the building at 176 Dyer St. is vacant and has water damage and other problems. Local advocates got the property listed on the National Register of Historic Places in 2011, citing its significance to Black, women’s and commercial history. Now a local nonprofit, the Georgia B. Williams Nursing Home, Inc., aims to preserve and reuse it as a museum and educational center, and hopes to offer scholarships to women studying midwifery and childcare. For more information, see beasbabies.org.

The National Trust, a nonprofit based in Washington, D.C., has issued the list of endangered sites since 1988. Other Georgia sites have appeared on the list in recent years, including Atlanta’s Sweet Auburn Historic District in 2012 and East Point’s Historic Civic Block in 2015.

The Georgia Trust for Historic Preservation issues a similar annual list called “Places in Peril” and is accepting nominations for the 2022 edition through June 18.