Blackhall announced Tuesday that it would be investing about $200 million to build 1.2 million square feet of studio space in Reading, a city west of London.

But Ryan Millsap, Blackhall’s chairman and CEO, said the expansion to the United Kingdom was being done in addition to (not in lieu of) the studio’s plans to expand in Atlanta.

Blackhall is still working on a land swap with DeKalb County so it can begin a major expansion here. Already Blackhall is one of the largest production studios in Georgia.

“The really exciting news is that an Atlanta-based company will be expanding overseas,” Millsap said in a phone interview Tuesday. “We are taking another Georgia-based brand international.”

Millsap said he has been in negotiations for the U.K. expansion for the better part of a year. It will be on land that’s part of the University of Reading, which has become a technology hub. It’s located about 20 minutes away from Pinewood U.K. 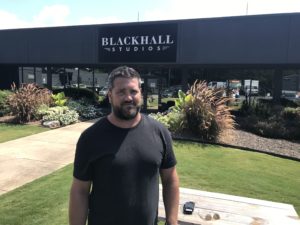 The United Kingdom and Canada have film tax credit programs that are similar to Georgia’s. Millsap said the six cities that have emerged as movie and television production centers are: Los Angeles, New York, Atlanta, London, Toronto and Vancouver.

“You have got to go where there’s opportunity to grow,” Millsap said.

“It would be our goal over time to have a presence in all six of those cities,” Millsap said. “We would stay based in Atlanta.”

Construction on the Atlanta Blackhall expansion, which also would be 1.2 million square feet, will begin four months after the land swap with DeKalb is put in place.

Millsap also envisions that construction on Blackhall’s new U.K. studio will begin by the end of the year.

“This is an expansion to meet the needs of our clients that stretch beyond Georgia,” Millsap said. “We have clients trying to make productions all over the world.”

The need for new production studios exists to help meet the insatiable need for content — from Disney, Netflix, Apple, Amazon, Sony, Warner Brothers, etc. It has been described as a war for content.

Millsap said he is hopeful and encouraged that the state will not pass legislation that will make Georgia less attractive for the film industry. The film tax credits are facing scrutiny, but it’s too early to tell if there will be any significant change to the incentive.

“Georgians have been very wise in putting a great tax credit program in place,” said Millsap, who added that it has led to major investments in production studios and the film industry eco system. “It’s exciting to see the leadership role that Georgia is playing in the entertainment space all over the world.”

State Rep. Terry Rogers, R-Clarkesville, voiced support for the tax credits at a recent lunch program of the Rotary Club of Atlanta. Rogers, who serves as one of Gov. Brian Kemp’s floor leaders, also chairs the Georgia Film, Music and Digital Entertainment Commission.

“For the last seven years, Georgia has been the No. 1 state to do business,” Rogers said. “A big part of that is the film industry.”

Rogers said he represents a rural part of the state, and yet the movie industry has been an economic plus for his district. He also mentioned that the industry also has made Georgia a more attractive tourism destination.