Arthur Blank was only 15 when his father, Max Blank, died of a heart attack. It was a difficult time for him and his mother, Molly Blank.

To help heal from their grief, the family went to a Humane Society in the New York area and adopted a dog. It was named Tawny, “like the color.”

From that point on, pets have been part of Blank’s life.

“When we take a dog for a walk at night or get up in the morning, a dog’s smiling face is always there for you,” said Blank, owner of the Atlanta Falcons and co-founder of the Home Depot. “Whatever the conditions are in your life, whatever is going on — good, bad or indifferent — they’re just incredible friends. I wouldn’t even call them pets. They’re more like friends and become like family.” 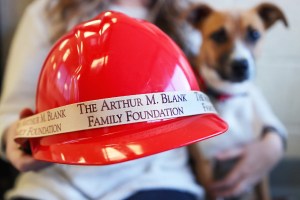 Given his family’s close attachment to pets — cats and dogs — it is not a surprise that the Arthur M. Blank Family Foundation is making a $4 million, three-year grant to the Atlanta Humane Society to support the expansion of the nonprofit’s new Westside campus and animal care center, which will open in either the late spring or early summer of 2022.

“The work they do is incredible for all animals,” Blank said in a recent exclusive interview about his foundation’s gift. “It was an opportunity to be a major supporter, along with a lot of other people, in making sure that some of our dearest friends — our pets — are well taken care of and find good homes. I love the work they do.”

The Atlanta Humane Society has been building its new $23 million campus on five acres at 1551 Perry Boulevard adjacent to the new Westside Quarry Yards development. It is selling its historic location at the corner of 10th and Howell Mill Road, where it has been since the 1930s when the property was a small farm.

“Our property at Howell Mill is very valuable,” said Cal Morgan, president and CEO of the Atlanta Humane Society for the past eight years. “We were able to realize $11 million from the sale.”

That means the Society is having to raise $12 million to build out the expanded campus. It launched the silent phase of the campaign in 2020, receiving 100 percent participation from its board. It was able to keep its community clinic open during the pandemic and distribute 275,000 pounds of pet food to people and pets in need. 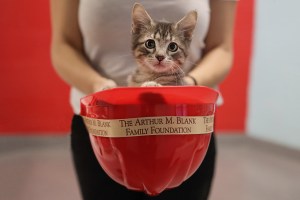 The Blank foundation gift will come with naming rights, but the name of the new campus has not yet been finalized.

“For us, the Blank gift made our campaign a success,” Morgan said. “It was transformational, and we hope it will inspire others to donate to the campaign. We are in the home stretch. We will have a lot of ways for the public to contribute.”

The campus will include an adoption, behavior and medical facility, landscaped walking trails, a memory garden and educational spaces for the community to gather.

“When Mr. Blank’s gift came in, we were able to include a lot of additional features we had wanted to have at the campus. We will have a nice walking trail and a bigger community garden,” Morgan said. “It’s going to be a spectacular building.”

The outline of giant red heart will adorn the front of the building, and Morgan expects people will soon appreciate and recognize the symbol of the Humane Society.

The Blank gift is a continuation of support the foundation has given to the organization over the years.

“Arthur Blank loves animals,” Morgan said. “Every year at the holidays, he would reach out to us, and he would pay for the adoption of animals during the holidays. It was something he did in honor of his grandchildren. He wanted them to be aware of homeless animals. He did that every year. We would send him the profiles of the animals that had been adopted.” 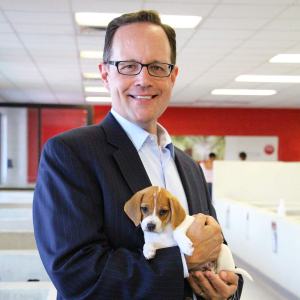 The Atlanta Humane Society has operated as a “no-kill shelter” since the early days of Morgan’s move to Atlanta in 2014. He moved here after serving as president and CEO of the Michigan Humane Society for 12 years. “Atlanta is an amazing city, a giving city,” Morgan said. “People are passionate about animals here. We love it.

The nonprofit is one of the oldest in Atlanta. It was founded in 1873 with a focus on women, children and animals. It remained a child protection and animal welfare society for 79 years. In 1954, it merged with the Society for the Prevention of Cruelty to Animals of Georgia and changed its name to the Atlanta Humane Society.

One of the organization’s main missions — to spay and neuter animals — has been a major success.

“It’s improved so dramatically,” Morgan said. We don’t have the big number of homeless animals that we used to.”

The Atlanta Humane Society serves more than 60,000 animals each year through various services including adoption, veterinary care, and community outreach. Last year, it provided 128,033 of these animal services to people and pets throughout Georgia and the Southeast. It now has three locations in metro Atlanta.

Morgan said he envisions some kind of “moving animal parade” when the Humane Society closes its doors at Howell Mill and to relocate 1.7 miles west to its new campus in 2022.

“It will be a lot of fun,” said Morgan, who talked about how much the Howell Mill Road area has changed — from a place where the parking lot has to be fenced off with razor wire to being one of the hottest real estate areas in the city. 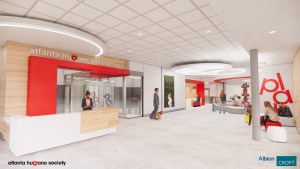 The two-acre Howell Mill campus will be redeveloped into a mixed-use, retail and residential complex.

For Blank, the investment on the Westside is in keeping with his efforts to revitalize the communities west of the Mercedes-Benz Stadium, the home of the Atlanta Falcons and Atlanta United.

“Anything we bring to the Westside of that kind of stature and importance, I think is a great addition,” Blank said. “The Humane Society has been in that area for many, many years. They’ve had a great home, but they’ve outgrown it. We’re happy to be part of that group of people who are going to help support the new center.”

Asked whether he currently has any dogs, Blank replied yes.

“I have two dogs, two golden retrievers. Molly is named after my mother. And Mya is named after [his father] Max. That’s the Greek derivation of Max — Mya,”  Blank said, reinforcing the notion that pets become members of the family. “Animals bring an abundance of love, joy and companionship to humans, and we need them just as much as they need us.”