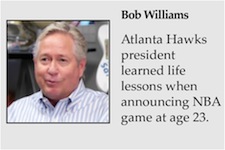 Bob Williams was looking for a job after he graduated from UGA in 1975. The one thing he knew about himself was that he loved sports. So he wandered into the offices of the Atlanta Hawks and offered to work for free. The NBA team accepted his offer and found a place for the man who is today president of the team and its arena.

The Hawks actually paid Bob $500 a month to go around the state and organize high school match-ups before the NBA players took the basketball court. Making deals with coaches to sell 500 tickets in towns such as Rome and Chatsworth, Bob got to know the players and later announced their games over the PA (public address) system in the Omni, where the Hawks played until 1997 (before Philips Arena replaced it). Following each high school game, the NBA players – and their longtime professional announcer – took the court.

“The second year of my career with the Hawks, there was a PA announcer named Marshall Mann,” Bob recalled. He was the “PA announcer for the Braves and the Hawks – huge man, great pipes, great PA voice – had a heart attack right at the start of the season. We had a game that night and we were scrambling around.”

A Hawks executive asked “who’s the kid who announces the preliminary games? He’s not bad.” So at age 23, Bob steps to the microphone and announces his first in a series of NBA games.

“Late in the fall, the Philadelphia 76ers were coming to town. It was Julius Erving’s first year in the NBA, so everywhere Dr. J and the Sixers went, the games sold out. So everybody was excited and we had a full house and about a half dozen of my friends came down to heckle me.”

Bob’s Moment occurred about halfway through the second quarter when a page slipped him a handwritten note during a timeout that said, “PA Announcer, put more enthusiasm in your delivery – Bud.” Bob looked across the court at Bud Seretean, who was the owner at the time. Bob thought Mr. Seretean was looking at him so he started hamming it up, “putting some mustard on the hot dog” on the pronunciation of the players’ names (you can hear his re-creation in our accompanying video). A few minutes later, the page hands him a note signed by the arena’s president, Bob Kent. It read, “Bob, stop the cheerleading now!” At half-time, nervous and confused, Bob ran over to one of his bosses, Reggie Williams, who was also a mentor. “What do I do, I got this note from Mr. Seretean and this one from Mr. Kent?” Bob asked.

His boss just looked at him and then started laughing, admitting he had written and sent both notes as a practical joke to poke fun at the now suddenly deflating ego of the hotshot 23-year-old announcer.

“I realized at that time things aren’t always what they appear to be, you always have to be prepared for turns in the road, don’t be surprised, just react to them,” Bob said. “I also learned that day that this is a fun business. We work in sports and entertainment and shouldn’t take it too seriously. We’ve gotta have fun because there are a lot of long hours. If you don’t, you’re not going to last. The pay is low, generally, because a lot of candidates want to work in pro sports and entertainment. You have to really love it and have fun with it because it doesn’t leave a lot of free time. Have fun with whatever time you have. Time is the only irreplaceable commodity: you can replace money, replace possessions, but you can never replace your time.”

Bob finished the season announcing, but had to make a choice at the end of the year: keep being a part-time announcer or stay full-time in other jobs with the Hawks. Today, he is president of the Atlanta Hawks and Philips Arena, running a professional team and managing a facility that deals almost every night with a totally different fan base – depending whether they are hosting wrestling, basketball, young fans of Justin Bieber or older fans of Neil Diamond.

A few years ago, when Bob was walking around the upper level, he saw soldiers in uniform enjoying a Hawks game. He invited them to the team’s suite and soon realized how much they appreciated the privilege. Bob was so touched by their gratitude he started a program that has brought thousands of military personnel – active, injured in duty and retired – and their families to events as a guest of the Atlanta Hawks and Philips Arena.

Recently, a color guard showed up at the arena and made Bob an Honorary First Sergeant and Honorary Drill Sergeant of Fort Benning’s Charlie and Delta Companies of the 30th AG Infantry. The hat and plaque and mementos of countless events hang in Bob’s office just off the floor of the basketball court that has been the site of Bob’s only career since he wandered into the Hawks’ offices nearly 40 years ago. “I didn’t serve in the military,” Bob said. “But I’m constantly amazed and humbled by how dedicated and selfless these young men and women are and how much they sacrifice for us.”

Next week in Moments: Imam Plemon El-Amin, an Atlanta native who returned from Harvard in the summer of 1972 and had a spiritual Moment.