University of Georgia football fans, what do you know about your first opponent, Boise State? Don’t say their No. 5 ranking, or their famous blue field. Everyone knows that.

Teams are like people – you can’t truly know them unless you know where they’re from.

We in Atlanta with roots in Idaho know that Boise State represents a culture as solid as their famous vegetable and as wacky as their indie star Napoleon Dynamite.

“Outsiders tend be fixated on potatoes and the blue turf when they think of Idaho and Boise State,” Zang said. 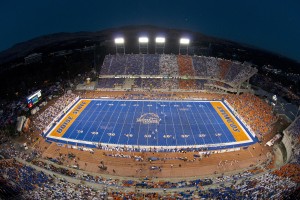 Bronco Field is known for its blue turf. The school colors are blue and orange (Photo courtesy of Boise State University)

Those icons, he says, overshadow a dynamic, young college that is just learning how to establish football traditions.

Boise State “started as a junior college in 1932 and didn’t gain university status until 1974,” Zang pointed out. It is “transforming so rapidly, it simply will not be the same place in five, 15 or 25 years.”

The football rituals so ingrained in the South get a fresh Western spin in Boise.

Brian Murphy, a former Georgian who now writes sports columns for Boise’s daily paper, mentioned how fans there eagerly anticipate wearing the color of shirt dictated by the athletic department.

“Whenever we post a story on the color scheme for a game, it’s the No. 1 story on our website,” he said of the Idaho Statesman.

Idahoans aren’t usually followers, by the way. They are shaped by the “big sky” high desert near Boise, which northward builds to the timber-rich where Sarah Palin went to college on her way to going rogue.

“There’s a sense here that if the rest of the country just left Idaho alone, people here would figure out a way to do it all better than anywhere else,” Murphy said. 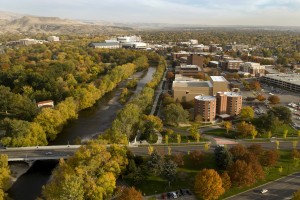 Campus photo: Boise State is located along the Boise River and adjacent to downtown (Photo courtesy of Boise State University)

Several thousand Boise State fans coming to Atlanta know that they’re different from Georgia, and everywhere else too.

“There’s Idaho and maybe Montana, but everything else — even California — is vastly different,” Murphy said. “Boise is like Atlanta in the 1960s, when the only team in town was the Braves. Boise State football is the one thing that sets them apart.”

For Rachel Wheatley of Sandy Springs, BSU football is the major thing that sets her apart in Georgia. She is the only Bronco alumni volunteer in our state.

“It’s a little lonely,” she said. Here 2,180 miles from her alma mater, “I’m pretty sure that if you cut me, I’d bleed blue and orange… I believe that Bronco fans are the best in the world.”

“My Own Private Idaho” — a hit for the great Athens band, The B52s — summed up this state of mind.

In that twilight lingers other Georgia-related football moments: the Humanitarian Bowl, which Georgia Tech played in 2004 and 2007, held on the blue field during the winter holidays – with no dome.

“The worst trip of the hundreds I’ve made to cover sports events all over the country started off poorly from the outset and just got worse,” recalled sportswriter John Hollis of the 2004 Humanitarian Bowl he covered for the AJC.

Among the strange occurrences: “I had planned to go skiing the day before the game, but passed after picking up the local paper and reading of an avalanche that had killed two people the day before,” he said.

When a blizzard threatened to strand him and his fiancée at the airport, he and other Tech fans opted for a flight to Las Vegas, and finally got home 18 hours later – to find his luggage didn’t make it.

Misunderstandings are common when it comes to Idaho. For starters, vowel-challenged outsiders often confuse Idaho with Iowa and Ohio.

Just ask David Archer, the former Falcons quarterback who with Wes Durham calls Falcons games on STAR 94 and 790 The Zone.

Archer is from a town in Idaho called Soda Springs (pop 3,300). In college, he transferred to Iowa State.

“I’d venture to say that if you go east of the Mississippi River, you wouldn’t find many people who had been to Idaho or even could tell you what the state capital is,” he said – hence the power of Boise State to educate outsiders.

“As a football player, that puts a little chip on your shoulder,” Archer said. “For anyone coming from such a rural area, that feeling exists. When people don’t have any idea where you’re from, that’s a respect factor. It makes you a little more edgy, willing to prove that you have an ability to play. It directly shaped my attitude to never say die.

“I did not want to be overlooked, and that definitely is what Boise State has experienced over the years. They’ve been told that coming from Idaho, they haven’t played anybody [great], but anyone they didn’t play, they beat them…. I think they do walk into the Dome with a chip on their shoulder.”

Archer keeps an Idaho tradition alive at home in East Cobb. He eats potatoes at almost every meal. When he dines out, his eyes for the best spuds follow, as does the pride in his home state.

“When a restaurant serves me an Idaho russet that’s 3 to 4 inches long, that’s not a russet,” said Archer, who worked on a potato farm in high school and still knows how to mend barbed wire.

“You have to have a second plate for a big russet from Idaho. It’ll feed 3 to 4 people. So yeah, I get a little defensive,” Archer added. “But in Idaho, we know we keep all the good ones in state, and send all the runts out.”

Michelle Hiskey has family ties to Idaho that reach back several generations.

Previous Article
Talk of compromise on federal highway bill bodes well for potential sales tax projects
Next Article
Airport concessions to be rebid because more than a third of proposals were botched by vendors, city says