‘Bombshell’ – a richly-detailed portrayal of Fox News under Roger Ailes

“Bombshell” is not only one of the best movies of the year. It’s also one of the most important. 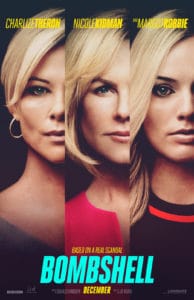 That’s because the lawsuits have already been filed – and won – in this recounting of how the mighty were felled at Fox News. It’s about what happened when some female anchors at Fox got sick and tired of being treated like concubines. Granted, highly paid concubines, doing a job a lot of people would kill for, but still…

As the Arby’s commercial goes, Roger Ailes (John Lithgow), the founder and head of Fox News, all but crowed “We’ve got the meat” – the “meat,” in this case, being the bevy of beautiful blondes who worked for him and were pretty much considered his personal harem.  To Ailes, proving your loyalty was very important; in the case of a beautiful woman, that meant sexual favors, the ultimate “loyalty” being oral sex – not, I’m guessing, what Bret Baier or Sean Hannity had to do to prove their loyalty.

Cool and confident, Kelly is already at the top of the food chain; she dealt with Ailes earlier in her career and somehow managed to avoid the loyalty oath. Still, she remains at risk. Challenging candidate Donald Trump at one of the early Republican debates about his treatment of women has resulted in the memorable “bleeding from her…” comment. “You know the entire country is talking about your period,” says her husband. 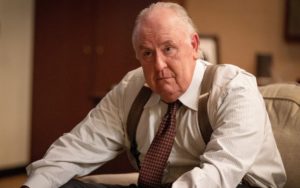 Carlson (Nicole Kidman) has also fended off Ailes while trying to maintain her career. She’s taken off the well-watched “Fox and Friends” and relegated to mid-afternoon purgatory. Sure, she has her own show, but, just as surely, nobody is watching. It’s a dead zone. She’s being punished and she knows it. Ailes says bluntly, “You’re sexy, but you’re too much work.”

Young, gorgeous, eager and ambitious, Kayla would love to become a Fox anchor. She’s noticed by Ailes and summoned to his office. Stand up and give me a twirl, he purrs, and you have to wonder, did anyone ever ask Walter Cronkite to twirl?

“Bombshell” is so richly detailed, so cunningly presented that, well, it almost makes your head twirl. The style is similar to “The Big Short” which is hardly surprising since both were written by Charles Randolph. It’s horrifying and darkly humorous at the same time.

Interestingly – and this is just another thing the movie does brilliantly – not all the bad guys are guys. Jeanine Pirro is shown running around the newsroom handing out Team Roger t-shirts. Kimberly Guilfoyle doesn’t come off as especially sister-supportive either. 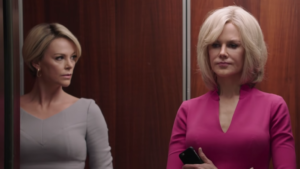 A scene in “Bombshell”

The acting is across-the-board brilliant, from the way Theron nails Kelly’s voice to Kidman’s shrewdly constructed Carlson to Robbie’s wide-eyed naivety. Add in Kate McKinnon, finally allowed to show her acting chops, as a Fox employee who’s a closeted Democrat (and gay).

Nobody here is trying to say these women are perfect people (let’s not forget how Kelly’s career at NBC ended). But in this case, in this circumstance, they were brave, they were smart, and they faced an uphill battle.

When push came to twirl, they said no. And as the culture is finally starting to learn, no means no.