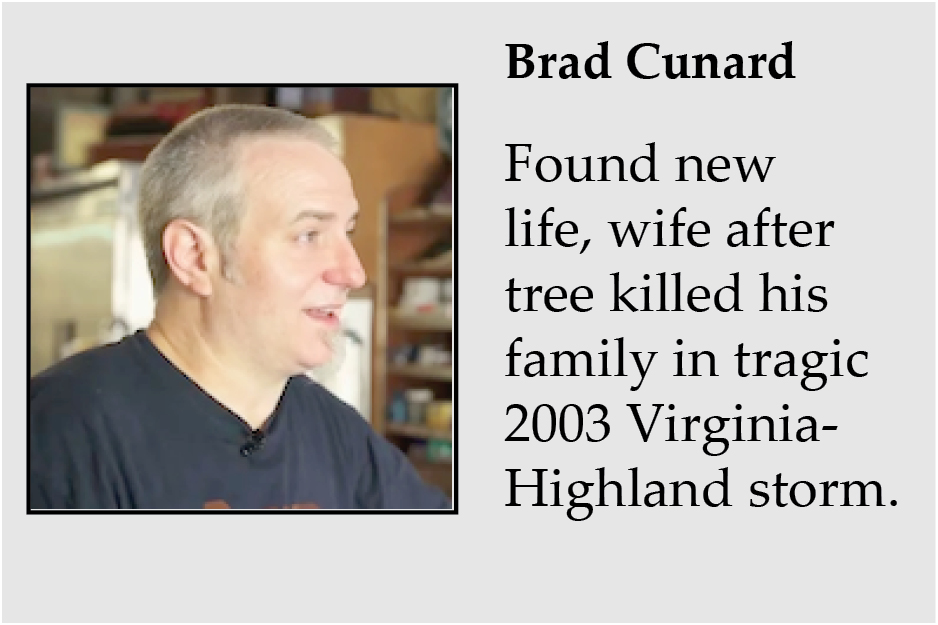 Almost 11 years ago, the worst tragedy anyone can imagine happened to Brad Cunard. In the days and weeks that followed, as word of the accident spread through Atlanta and around the world on CNN, most people responded with the same question: “How does one recover from that?” Happily, we now have an answer.

I was stopped at the intersection of North Highland Avenue at Virginia, waiting for the light to turn green and watching with growing fear as one of the most powerful thunderstorms I’ve ever seen built into a menacing fury in the skies above. A hundred yards north, at that same Moment, Brad and his wife Lisa were driving south on North Highland. In the back seat, their three-year-old son Max grew anxious about the storm. Lisa crawled into the backseat to comfort him and Owen, his five-month-old brother. As Brad inched along in traffic, he neared the Virginia-Highland Fire Station #19 on his left.

Suddenly, I watched as a huge tree fell across N. Highland. All I could see were two headlights, beaming from the limbs and leaves.

In Brad’s car, there was an explosive noise. He turned his head around but he couldn’t see the back seat. He could only see the bent roof of his black Toyota LandCruiser. Looking out the sunroof, he saw a 100-year-old, 70-foot-tall oak tree crushing the rear of his vehicle. Within Moments, firefighters swarmed the SUV with saws and other rescue equipment. While Brad stood on the sidewalk and watched helplessly, he saw all the firefighters simultaneously stop working and back away from the car. One walked over to Brad and confirmed his fear: Lisa, Max and Owen had died instantly. Brad wasn’t scratched, but on the inside, the deep hurt and shock had just begun to register.

“My Moment was the day after tragedy struck,” Brad told us in our accompanying video. “I woke up and my whole world was gone. I lost everything. I lost my business, I lost my family and I had to start over. The first thing I could think of to do was to just go out and start walking, trying to get some sort of flow into my brain. I found that it became more of a prayer walk, if you will. And I went from about 230 pounds down to about 175 pounds over a few weeks time. And that was really the beginning of the new me.” 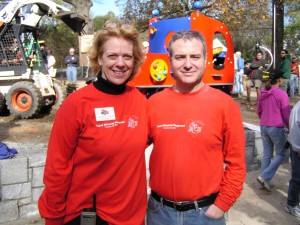 Cynthia Gentry and Brad Cunard at playground installation in 2003.

Brad’s neighbor, Cynthia Gentry, wanted to do something positive to comfort her friend and to honor the neighbors she too dearly missed. She organized an effort to build a playground on Virginia Avenue and rallied neighbors such as me to raise money. Rich Chey, owner of Doc Chey’s restaurants, organized a dining-out event in Virginia-Highland that raised $20,000. Brad visited every restaurant participating that night and gave each owner a small toy fire truck, which had been Max’s favorite toy. Neighbors mailed in checks to support the effort. Brad asked me to help manage the wave of reporters wanting to interview him.

Cynthia scheduled Installation of the playground on Saturday, November 15. On Thursday, I drove Brad to The Bert Show at radio station Q100, which had been on the air for two years and had built a loyal following on a small FM frequency (before it replaced the larger 99X in 2008). Bert Weiss had a young family of his own and the empathetic host asked Brad how he was coping and how his listeners could help. Brad talked about the playground project and asked for volunteers and donations. After 15 minutes, Brad and I walked out of the studio and were opening the door to the hallway to the elevator when Producer Jeff Dauler ran toward us and asked us to stop. “You have to come back,” Jeff said. “We‘re getting calls. People want to give money. We’re clearing our regular programming!” 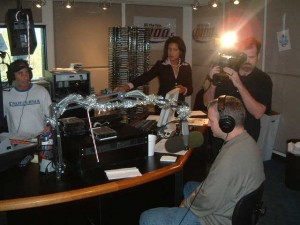 For the next two hours, Bert and crew aired calls from hundreds of listeners who eventually raised $60,000 – helping to top Cynthia’s initial ambitious $135,000 goal with the actual $300,000 in cash and services donated. TV stations that heard the broadcast sent camera crews to the radio station and videotaped him as he told his story. Brad and I were stunned as the show went off the air.

“We don’t have a big antenna,” Bert said as we walked out of the studio – for the second time. “But we have a big microphone and our listeners have very big hearts.”

That afternoon, we drove to CNN, where afternoon news host Miles O’Brien asked Brad on-air, “To lose everything in an instant like that, I suppose a lot of us thinking about it, would think – the first thing we want to do is, you know, sell the house, pack up and move. Did that go through your mind? And have you changed since you’ve seen the way the community is responding?”

“I didn’t know what I was going to do to begin with,” Brad told the international audience. “I did just want to go home. That was part of what I wanted to do right after the accident. I just want to get back home where I felt comfortable, but then I wasn’t sure exactly where I was going to go. And then the community support just really, really has been so much that I can’t imagine leaving.” 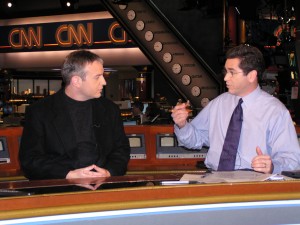 “What is the lesson here for the rest of us?” Miles asked him at the end of the segment. “Live every Moment,” Brad said. “Don’t put anything off because life is fragile and precious. And you never know what’s going to happen.”

That Saturday morning, Brad and hundreds of volunteers showed up at John Howell Park to clean up, assemble and install the Cunard Memorial Playground. A plaque honors Lisa, Max and Owen and the many donors. Cynthia was so inspired by the experience that she went on to be an advocate for children’s play and will help install a new playground at Woodruff Memorial Park in Atlanta later this week.

When we taped Brad last week, he said, “I found myself oftentimes feeling like I was this great cosmic joke. And by that, what I mean is despite all your preparation and despite everything you can do, you can lose everything, through no actions of your own, you can completely just have everything that you’ve built wash away, like water over a dam.”

Two years later, Brad met Nina in Virginia-Highland. They eventually married, sold his Virginia-Highland house and moved to Gulf Breeze, Florida, near Pensacola. They tried buying a building in New Orleans to open a small grocery and grill, but were outbid amidst the turmoil following Hurricane Katrina. So they moved back to Atlanta, into an old house in Cabbagetown, near Oakland Cemetery. 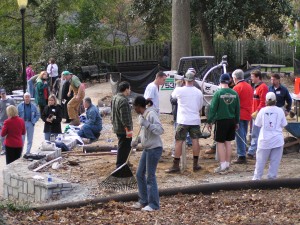 Hundreds of volunteers showed up to install the Cunard Memorial Playground at John Howell Park in Virginia-Highland in 2003.

On the evening of March 14, 2008, Nina thought she heard a train. Brad knew better. He opened his front door and saw trashcans flying through the air. Big trees were bending in the winds of a killer F3 tornado tearing across downtown Atlanta. Their house had no basement, so Brad grabbed Nina and they hid beneath a mattress as the storm blew down their street.

“I just knew lightning couldn’t strike the same man twice,” Brad told us. “Or could it?” When the roar subsided, they crawled from under the mattress, looked around their house and realized they were spared, though others nearby were not so lucky.

A year later, Brad and Nina had a daughter, Fiona, who’s now three and a half and enjoys attending a neighborhood cooperative school.

“Nina has been the one person that has accepted me for exactly who I am despite my past, despite everything that has happened. When other people thought I was completely insane, she gave me that ability to believe in myself, again; To restart,” Brad told us.

Two years ago, they heard the owners of Little’s Grocery, a Cabbagetown institution since 1929, were closing its doors. So Brad and Nina decided to start their little New Orleans grill and grocery in Cabbagetown, a neighborhood that Brad says is a lot like Gulf Breeze, “but without the ocean.”

They opened the store a year ago and it is popular with neighbors and residents of The Stacks at Fulton Cotton Mill, which is just across Carroll Street. Nina and Brad and their team serve the store’s historic 2-ounce “little burgers” as well as larger sandwiches, organic beef burgers and, of course, New Orleans lemon shrimp po’ boys.

In his old life, Brad and Lisa, a graphic artist, co-founded Kudzu Graphics. My newspaper business at the time, Atlanta Intown, had used them for graphic output and I knew Brad and Lisa, but had not met their children. I knew the business had been stressful for them.

“Nina and I wanted a business where people walk out happy. People didn’t always walk out of the printing business happy. It was more of a necessity.” They seemed to have made a Creative Loafing reviewer happy; click here for review.

“People here in Cabbagetown don’t know about my past. To them, I’m Brad the grocer or Fiona’s dad. That’s nice. It makes things easier for us.

“Life targets no one but it targets everyone,” Brad said, sitting on the stool of Little’s while Nina served breakfast sandwiches at the counter behind him. “You can’t stop what happens in life.”

Next week in Moments: “Souper” Jenny Levison, who drew strength to open two successful restaurants from the energy of a dying friend.