A decade-long effort to commemorate a rare piece of Negro Leagues baseball history in Southwest Atlanta, the former Black Crackers practice field, is getting a boost this week from Major League Baseball and the Atlanta Braves.

The league and team’s private volunteer work day July 28 may help spark further hands-on help and fundraising for the field within the Outdoor Activity Center park in Oakland City and Bush Mountain. The effort is certainly fitting at a time when MLB has finally, officially embraced the Negro Leagues as part of its history and when baseball is once again in play for national discussions about politics and race, from the All-Star Game pulling out of Atlanta to the renaming of the Cleveland Indians. 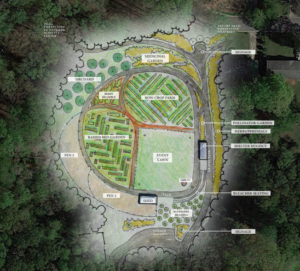 The West Atlanta Watershed Alliance, a nonprofit that operates the City-owned OAC at 1442 Richland Road, has a plan to turn the former Black Crackers field into an event lawn with an outline of bases, surrounded by gardens and urban farms. What’s been missing from the plan is money and labor.

Na’Taki Osborne Jelks, WAWA’s co-founder and board chair, says the Major League assistance may be a “catalyst” for further public and private investment in the effort to “educate the community… about the legacy of the Atlanta Black Crackers, as well as the legacy of the Bush Mountain community.”

“The former Atlanta Black Crackers practice field at Bush Mountain is an integral part of Atlanta’s baseball history, which we are honored to help commemorate,” said Danielle Bedasse, executive director of the Atlanta Braves Foundation, in a written statement. “The volunteer day and the Braves’ ongoing partnership with the West Atlanta Watershed Alliance will help refurbish and beautify the space so that the community can enjoy it and remember its role in Atlanta history for generations to come.”

“Black Crackers” is a weird-looking name today, when “cracker” is both a term for poor Southern white people in general and, specifically as an insult, for racist white people. But it made its own kind of sense during the segregation era with its ever-twisted logic.

The all-Black team began life in 1919 as the Cubs, but quickly changed to the Black Crackers, apparently due to fans’ use of the term, according to the New Georgia Encyclopedia and the Atlanta History Center. “Black Crackers” apparently was derived from the Atlanta Crackers, an all-white minor-league team that was the city’s local ball club until the Braves moved here from Milwaukee in 1966. (The Crackers moved to Virginia at that time, and after various permutations, survive today back in metro Atlanta as the Gwinnett Stripers, the Braves’ Minor League affiliate.)

The Black Crackers played in the Negro Southern League and lost the 1938 Negro American League championship to a Memphis team. The team went through various ownership changes, disbandings and revivals until Major League Baseball began integrating the late 1940s and early 1950s.

The Crackers and the Black Crackers both played at Ponce de Leon Ballpark at 650 Ponce de Leon Ave., where the Midtown Place Shopping Center now stands across the street from Ponce City Market. A large magnolia tree that once sat in center field, and later outside the fence, still lives behind the strip mall.

From at least the 1940s, the Black Crackers practiced on a community-created field in Bush Mountain, a Black neighborhood where some of the players lived. That field, just off Plaza Avenue, since the 1970s has been part of the 26-acre OAC, which WAWA took over in 2008 amid deteriorating conditions.

“It has been a lengthy comeback,” Jelks said of the OAC.

In 2011, WAWA developed a “conceptual vision” for the entire park, which included returning the Black Crackers field to playing use for the community. But progress has been slow. In 2015, an urban farm program partnered with WAWA to plant on the site — a use that would not preclude later reuse as a ball field — but that deal fell through, Jelks said. A few fruit trees were planted in the field area.

Since then, WAWA has updated the park vision. For the Black Crackers field, that now means an “event lawn” that maintains an outline of the diamond, with a fire pit at home plate, bleachers and a dugout/shelter. The outfield area would be gardens, farms and an orchard. Among WAWA’s newer partners that could help with such a program are the City of Atlanta’s Office of Resilience and a different urban farming program, Patchwork City Farms.

Jelks calls the plan “commemoration with a purpose,” turning the field into a “community gathering space.” Educational signage is another component, and the upcoming work includes a trail from Bridges Avenue on the southern edge of the OAC, which Jelks says is “something the community has asked for, so enhancing that community access will be great.”

There’s no specific budget for the vision yet, but Jelks says the MLB/Braves work will be important not only for the work that will be done — including clearing the site and the new trail, and improvement to community gardens — but also for momentum on the plan.

The Braves say that they also will make another historical gesture by planting a seedling from the Ponce de Leon Ballpark magnolia tree at the Black Crackers field. Another seedling from the tree was planted on Earth Day this year at Truist Park, the Brave’s home field in Cobb County. The tree-planting, the Braves said in a press release, means “linking the locations and their roles in Atlanta’s baseball history.”

More than 150 volunteers from MLB, the Braves, Delta Air Lines and the community are expected to join the work this week. (It’s a private event, so the general public is not welcome to show up for this one; for future volunteer opportunities, see WAWA’s website.) Jelks said the nonprofit Hands On Atlanta connected WAWA with MLB and the Braves.

A Braves spokesperson said that “details are being finalized” on an ongoing partnership with WAWA.

Late last year, MLB announced that it was giving recognition to several of the Negro Leagues — including those the Black Crackers played in — as part of its official statistics and records. The volunteer effort comes in the same month that MLB was to hold the All-Star Game and draft in metro Atlanta, but moved them earlier this year in response to Georgia’s controversial voting law changes, Senate Bill 202, which contained new restrictions that critics said would disproportionately impact Black voters.

The volunteering at the Black Crackers fields comes immediately before the Braves’ Hank Aaron Weekend, honoring the late Hall of Famer and his civil rights work. The weekend programs includes celebrations of refurbishments at active ballparks serving youths in areas of south Atlanta and Cobb County.

“In addition to winning baseball games, the Atlanta Braves are committed to supporting our community,” said Braves President & CEO Derek Schiller in a press release. “These projects will serve as longstanding, meaningful partnerships to provide access to our sport for future generations and to aid those in need throughout Atlanta.”

Updated – View Kelly Jordan’s photos of the recent service day by Delta and the Braves at the field at Bush Mountain:  https://saportareport.com/black-crackers-former-practice-field-at-bush-mountain-service-day-by-delta-and-braves-july-28-2021/columnists/kellyjordan/kelly/

Hank Aaron the businessman: Another way of remembering the home-run slugger