Breaking the glass ceiling: My journey as a female leader in sports

Image provided by the College Football Hall of Fame.

By Guest Columnist KIMBERLY BEAUDIN, president and CEO of the College Football Hall of Fame.

As the first female CEO in the College Football Hall of Fame’s 71-year history, it’s important to reflect on my path, on those who championed and believed in me and on those who still present a very real challenge today. It is my hope by confronting these challenges head-on, my experiences might help other women in their journey to the top.

The truth is, I like being a woman in a male-dominated industry. I feel at home in the results-focused culture of sports and the business surrounding it. This business lights my competitive fire, and I am good at what I do. However, it isn’t always easy, and you can’t go it alone. I have been blessed with mentors who pushed me even though it was uncomfortable. Individuals who demonstrated such courage in their lives, how could I not be courageous in mine? It is ok to be scared. Just don’t let fear paralyze you and rob you of who you are meant to be. 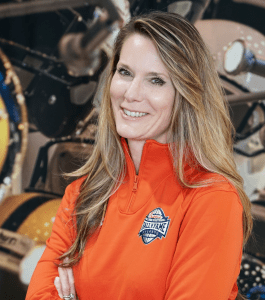 Kimberly Beaudin is president and CEO of the College Football Hall of Fame.

I also encountered amazing leaders along the way, who recognized my talent and rewarded my accomplishments. Be “So Good They Can’t Ignore You” is my mantra, and as the author, Cal Newport, concludes “skill trumps passion in the quest for work you love.” I am humbled every day by the realization my quest has led me to a place where my skill and passion collide.

I also had to learn the ropes of humility and sacrifice to succeed as a woman in sports. My generation — Generation X — is the first to truly matriculate into senior leadership roles within male-dominated industries and sports organizations. That means being on the front lines of the battle against the “old guard.” I’ve been asked to get coffee, make copies, take notes and more despite being more senior than most of the men in the room. I’m not here to rehash every slight or transgression, but to share some reality with women coming behind me: You will encounter rare but unmistakable instances of misogyny. You will feel belittled and ignored, but do not let it stop you.

How, you ask? Do not take it personally and keep pushing forward. I believe in focusing on your own personal excellence and being thorough and efficient. It’s OK to make yourself and your work visible, especially in the context of the team that is behind every achievement. There is not a single player in the College Football Hall of Fame who got here without determination, character, a standard of excellence and the endless, immeasurable support from coaches and teammates at every level.

It is important to stand up for yourself and those around you. I find a little respectful humor will disarm even the most deeply set in their ways. I lean into servant leadership. I see it as my job to make other people’s lives easier and to build an organization centered on trust, compassion and excellence. So yes, sometimes I will get that coffee, regardless of whether I run the organization or not. That is not a weakness. It is the epitome of strength.

Sports are a microcosm of society, and every year I see the bar rising for women. We’re achieving in places we never dreamed we could, and we’re bringing the next generation of female leaders with us.

I encourage the women who will steer our collective future to use your influence to do good, keep reaching back and be so good that they can’t ignore you.