Bridges between Black and white

On Saturday, Sept. 24, 2022, the life of the remarkable and humble Dorothy Marie Mallinson Todd was celebrated at her lifetime home church, St. Anthony of Padua Catholic Church in West End.

It is the blessed congregation of mostly Black faithful that begs to be chronicled by this event.

Dot was a proud second-generation Atlantan who never lived more than ten miles from her birthplace on Ivy Street, St. Joseph’s Infirmary, a site now occupied by Truist Plaza, now on Peachtree Center Avenue, and the hospital now in Dunwoody. But not Dot. When others left, she stayed.

Every funeral is described as a Celebration of Life, but few truly are. Hers was. Like Pete Correll’s and Ivan Allen, Jr.’s at First Presbyterian Church of Atlanta. Pete Correll saved Grady and Ivan Allen saved Atlanta. This diminutive, 95-year-old, mother of nine, grandmother and great-grandmother shows up nowhere in the histories of Atlanta. But the ceremony on Ralph David Abernathy Blvd. unlocked the secret of her profound, yet unknown legacy. The themes of the eulogy speakers and the homily by the priest told the story well. Themes of racial harmony, friendship, kindness, true Christian love, and perhaps most importantly deliberate and intentional outreach and overture to “the other.”

In 1970 Dorothy’s beloved southwest Atlanta was in the midst of radical change. A 180-degree flip from an all-white working-class population to a nearly all-Black community, except for Dot. Even when unscrupulous white real estate agents knocked on the doors of white residents of West End, Cascade Heights, and other established and previously stable neighborhoods with warnings of “you better get out now, while there is still time.” Home prices plummeted. Entire blocks fled to Cobb County, sometimes arranging the new subdivisions in the exact relationship to their previous homes. Best friends lived across the street from one friend and next door to the other, just like in Southwest Atlanta. But Dot stayed. 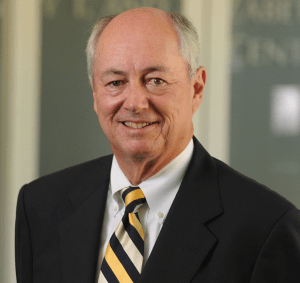 Bill Todd teaches Management in the Healthcare Sector each semester at Georgia Tech.

In 1970 a new Atlantan moved from California after her husband retired. She moved to Southwest and appeared at St. Anthony’s in search of a new church home. Fortunately, Dot Todd greeted her at the door, and they became friends right away. This daughter of the parish, who had been baptized, confirmed, married, and later funeralized her husband at St. Anthony’s went out of her way to welcome the new person, “the other.” Dot insisted that Louise Robinson sit next to her in her traditional second row left pew. It was intentional, deliberate and authentic. Dot did not do it for show, and yet it sent a powerful message to the congregation. Here was an old-time, rock of the church, welcoming with open arms a newcomer, who happened to be Black.

Finally, after her childhood friend Rachel Bailey died, Dot was the last surviving original white member of the church. Dot and Louise, inseparable, became the pillars of the church. When newcomers “discovered” West End, with its rich history and collection of Victorian and bungalow housing treasures white families began to trickle into St. Anthony’s, but not nearly in numbers as in previous generations. Dot’s children remembered back to the 1950s when a couple of pews in the very back were filled with worshiping Black faces, but by the end of the 20th century and into present times, St. Anthony’s was a Black church.

And the style of worship reflected the richness of Black culture, with an accomplished choir singing both traditional and African hymns and songs. The vestments of the priests went from gold and white inspired by Europe to colorful mosaics seen in African art. Dot thought that the changes were wonderful and embraced them.

Eventually coerced by her children and aided by her husband, Dot left Southwest Atlanta in the mid-80s as the public safety situation deteriorated and her grandchildren did not come to visit. Dot left kicking and screaming and did not talk to her husband for weeks in protest. In a ranch-style house in the Oak Grove section of DeKalb County, she built a new community and was seen every day power walking and picking up trash in her hilly neighborhood.

Dot attended a closer Catholic church only a few doors from her home, oftentimes walking to and from daily Mass and politely turning down offers of a ride. She insisted that she was only a visitor to that church even attending six days a week. She was a member of St. Anthony’s parish.

When both women were widowed, they both picked up the “old ladies” in their cars each Sunday and brought them to Mass. Dot proudly drove her Prius, and eventually had to include Louise on her route after she quit driving.

At some point in the last few years, these two remarkable women were given the titles Mothers of the Church by the priest and the lay leaders of the congregation. There was a ceremony with what looked like thrones set up in front of the 1902 altar and plenty of flowers as both women were very fond of flowers of all types. Each woman wore Easter dresses and large floppy hats that neither wore regularly. They were not ones to draw attention to themselves.

At the Celebration of Life, the many Todd children, grandchildren, great-grandchildren, spouses, and significant others arrived plenty early and occupied the first four pews, naturally on the left side where their mother always sat. The lead priest among the nine who con-celebrated the service inquired as to why we were sitting on the wrong side. And they learned that many years ago Louise revealed to Dot that she preferred the right side since the pulpit was directly in front of her preferred seating. So after scores of years, from being a little girl receiving her First Community to attaining practically Founder status, she moved in order to sit by her BFF, her soul sister, Louise.

Fortunately, Louise was able to visit Dot the day before she died, in loving hospice care at Fountainview. One of the eulogists looked directly at Louise sitting in their designated seats in front of the lectern and said, “Louise, it’s up to you now. You’re in charge.” In the Navy, the captain of the ship says, “you’ve got the bridge” when he departs, and the submariner says, “you’ve got the con.”

The last original white member of the church was off to her reward, to make a place for her friend.

The remaining Mother of the Church sat in a chair at the reception in the church basement, receiving friends and family as appropriate.

The torch had been passed. The remaining Mother of the Church presided over a congregation that was not all Black or all white. It just looked like Atlanta. The best parts of Atlanta.