The iPhone’s marimba beat woke me as usual, only the direction was very wrong. The sound came from the floor, where the phone had fallen. 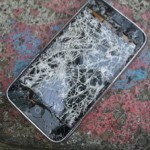 A broken smart phone screen reveals the deep need to stay connected, and the growing market for keeping us linked. (Photo:IRepairIt)

Within a few days, the air-conditioning would also break, but even in mid-August, living in a sweat lodge was minor compared to a shattered phone.

My phone is my lifeline, stowing my schedule, contacts, reminders, lists, music, maps, photos, news and diversions. The mere thought of disconnecting made me sweat.

“This will be a neat tool for you,” my dad had said two years before when he gave me my first smart phone. He knows phones. He uses them so much that when personalizing his Christmas stocking, we put a phone on his. We teased him about the phone growing out of his ear until cell phones became such a common appendage to everyday life that he no longer stood out.

The emotional and deep connection to and through a phone became as clear as my new screen after the brief adventure last week. The quest led to a small, thriving universe that exists to reconnect us, and how one young man in Atlanta, Shahzad Pirani, re-made himself through repairing phones.

The backdrop is sentimental. A few days before the smashed phone, my fall cleaning uncovered a reference book from 1991, “What’s What: A Visual Glossary of the Physical World.”

A cellular telephone, according to “What’s What: A Visual Glossary of the Physical World,” published in 1991. “Available features include memory redial to recall numbers… and an electronic lock to prevent unauthorized use.”

It’s a picture book of the names and parts of familiar objects, the kind of volume made irrelevant by the Internet, unless you need a doorstop.

Flipping it open for old time’s sake, I landed on page 181, “Cellular telephone.” The photograph resembles a satellite phone. “Available features include memory redial to recall numbers… and an electronic lock to prevent unauthorized use.”

The “signal strength indicator” looked like lettering on a homemade robot costume.

This amusing information is on the Internet somewhere, so why hold on to it? Answer: to  show my kids (part joke, part proof ) the heavy, unreliable devices we once carried, now made miniature and multipurpose.

If knowledge is power, right in our palms, then aren’t we all Spiderman, also burdened with a great responsibility to use it wisely?

First step to iPhone repair was asking for recommendations (on Facebook, naturally). Within a few minutes, I had several tips: Onyx in Decatur, Ubreakifix near Lenox, iHospital, PowerBookmedic.com – and even links to do-it-yourself videos. The speed of answers told me my friends understood: Restore your phone, restore your life.

The option that seemed quickest, easiest and cheapest texted me right back. Shahzad Pirani, 21, is the son of Pakistani immigrants who was born in Chicago and moved to Georgia with them when he was six. 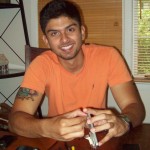 He graduated from Collins Hill High School in Gwinnett County and studies economics at Kennesaw State. He always wanted to be an entrepreneur like his dad, who in Rome owned a convenience store and coin laundry where Pirani used to help out.

In 2009, while making $8 an hour manning a cell phone accessories kiosk in Cumberland Mall, Pirani saw that customers didn’t want to buy trinkets. They wanted their phones fixed quickly and cheaply. Replacing an iPhone cost up to $600 then, and it’s still pricey.

Pirani started buying broken iPhones to take apart. He combed the Internet for tutorials. He found sources for replacement parts.

Goodbye mall, hello home visits – and an internal look at the devices that dictate and punctuate our personal lives.

“Sometimes people break them in anger. I’ve seen that multiple times,” said Pirani, whose 2007 Camry has 150,000+ miles on it. “I had an incident when a couple broke both of their phones at the same time … because they’d thrown them at each other.”

His Google reviews revealed how in some households, a smart phone is the baby of the family who can do no wrong.

“My daughter shattered the front and back glass,” detailed another.

As Pirani’s company, iRepairIT, helps customers get reconnected, he gets a more personal connection to them.

“I love meeting new people, and it’s always good to see people happy when they see their phone’s fixed,” he said. 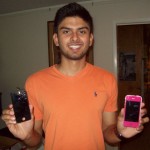 Gratitude, relief, the forgiveness of sins done and left undone. All this for $50 on up ($150 for an iPad). He fixes three to five devices a day; 15 or more each week.

Pirani didn’t need long with my busted 4S. The resurrection made me realize — healthy or not — that my phone is my life tether. Small like a baby, only existing to serve me.

Usually I’m a budget watcher, but didn’t think twice about paying Pirani $15 more for a deep pink replacement glass that made me happy and impatient to show my friends. 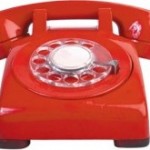 Another option — bright red — reminded me too much of the one in old movies, used by the President to order nukes on the Soviet Union.

That used to be the most powerful phone I could imagine. Not any more.

With additional reporting by Ben Smith.

Michelle Hiskey is a freelance writer and writing coach based in Decatur. Reach her at [email protected]