Atlanta Mayor Andre Dickens with Juanita Baranco and Jim Durrett at the 2022 annual meeting of the Buckhead Coalition. (Photo by Maria Saporta.)

The spirit of Sam Massell was alive and well at Wednesday’s annual meeting of the Buckhead Coalition.

Former Atlanta Mayor Sam Massell, who was president of the Buckhead Coalition for 32 years until he retired in 2020, died March 13. 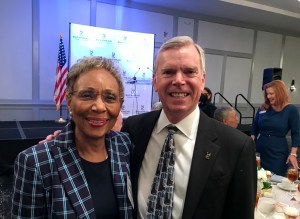 But the annual meeting — held at Flourish this year rather than the now-closed 103 West — included many of Massell’s special touches. The room of about 200 people included a balanced representation of business executives, elected leaders, government officials, directors of nonprofits, members of the Atlanta consular corps, journalists and media executives. Each assigned table had a mix of people — continuing the tradition of being one of an exclusive invitation to one of the most inclusive luncheons in Atlanta.

Jim Durrett, who succeeded Massell as president and CEO of the Buckhead Coalition, said the organization would announce a special remembrance of the late Atlanta mayor later this spring.

“Sam, he would want us to carry on,” said Juanita Baranco, chief operating officer of a family-owned car dealership company that includes Mercedes Benz of Buckhead and the 2022 chair of the Buckhead Coalition. “I can assure you this is exactly what the Coalition intends to do.” 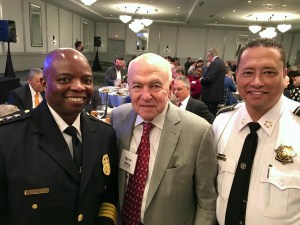 It also was announced that Eric Tanenblatt, global chair of public policy and regulations for the Dentons law firm, has been elected as chair-elect of the Coalition.

Fulton County Commission Chair Robb Pitts told the audience of about 200 attendees that Massell had been instrumental in helping Atlanta secure the historic boxing match between Muhammad Ali and Jerry Quarry on Oct. 26, 1970, at the Municipal Auditorium. Pitts described how he witnessed State Sen. Leroy Johnson and Massell convince then Gov. Lester Maddox — a segregationist — to privately agree to Atlanta hosting the fight.

Keynote speaker Mayor Andre Dickens looked across the room and openly wondered how any business was getting done in Atlanta during the lunch — calling it a who’s who affair. “Everybody is in this room,” he laughed.

Dickens, who has been in office nearly three months, said the city is on track to hire 200 new police officers by the year. He thanked Atlanta’s Police Chief Rodney Bryant for his leadership, making it seem as though the chief would be sticking around. 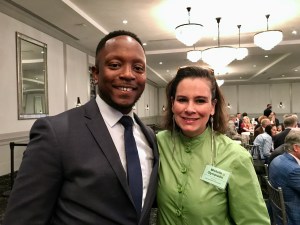 Former colleagues: Courtney English, former board chair of the Atlanta Public Schools who is now a senior advisor for Mayor Andre Dickens, with Michelle Olympiadis, a current member of the Atlanta Board of Education. (Photo by Maria Saporta.)

A big goal for the city is to get repeat offenders and career criminals off the street with a “repeat offenders tracking unit”,  Dickens shared, adding that about 1,000 “bad characters” are responsible for about 40 percent of the crimes committed in the city. “Hopefully their time is coming to an end,” he said.

Dickens also said the city is renewing its relationship “with our friends at the Gold Dome.” While there had been a great deal of attention on the possible de-annexation of Buckhead so it could become its own city, Dickens pledged to continue working serve the Buckhead community.

“The mayor is spending more time in Buckhead than my wife,” quipped Atlanta City Councilman Howard Shook, who represents Buckhead, during lunch.

In his closing remarks, Dickens described Massell as someone who believed “we can do more with a conference call that we can with confrontation.”