The influential Buckhead Coalition and the Buckhead Community Improvement District are joining forces under common leadership.

The boards of both organizations approved to combine their efforts under the leadership of Jim Durrett, the executive director of the Buckhead CID, who now will also become president of the Buckhead Coalition.

The move follows the announced retirement of former Atlanta Mayor Sam Massell, who has led the Buckhead Coalition since its inception 32 years ago.

“I’m saluting the next step and transformation of the Buckhead Coalition,” Massell said in an interview. “I’m in support of the transformation.” 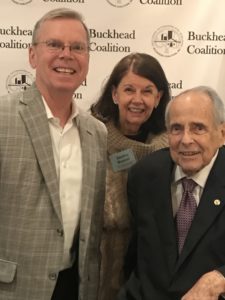 The effort to combine both organizations was spearheaded by Buckhead Coalition chairman Joe Evans and Dave Stockert, who has been chairing the Coalition’s succession committee.

The combination of both organizations also will include closer ties with two other groups – Livable Buckhead and the Buckhead Business Association. All four organizations will share office space in Tower Place, and they will work more closely to coordinate their various efforts.

“We will have a bigger table,” said Durrett, who has led the Buckhead CID for 10 ½ years.  “We are going to work together on what the Buckhead Coalition 2.0 is going to be.”

“We created the BCID and purposefully, at my request, spun it off as separate organization,” said Massell, who spoke highly of Durrett. “Jim is a bright young man who has a good heart with commitment and responsibility”

Then Massell laughingly added: “his style is slightly different that than my style. But he’s highly respected.”

For decades, Massell, 92, has been the flamboyant “voice of Buckhead,” while Durrett is more understated and measured.

“When they made Sam Massell, they broke the mold,” said Evans, who added that they did consider the possibility of just replacing Massell before exploring a new leadership model for Buckhead. “It just seemed like a compelling opportunity – not to try to replicate Sam Massell – but to build on the foundation he created with a collection of resources and strengths we had in Buckhead.”

In doing their research, Evans and Stockert met with the leaders at Central Atlanta Progress and the Midtown Alliance to better understand their governance structure. Stockert had chaired CAP, and he knew it had common leadership with the Atlanta Downtown Improvement District. The Midtown Alliance has the same arrangement with its community improvement district (a self-taxing geographic area).

“It did seem as though Buckhead was an outlier,” Evans said. “In Buckhead, there was not nearly the degree of coordination among those groups as we sensed there was in Midtown and downtown.”

Stockert admitted that “Sam is a tough act to follow,” and his retirement gave the Coalition an opportunity to reflect on how it wanted to proceed without Massell at the helm.

“We have four different organizations with four different governing boards. We have had more silos,” Stockert said. “We felt there was an opportunity encourage more interaction and communication. We hope as decisions get made of what’s in the interest of Buckhead, we will be able to have more integrated decision-making.”

Durrett, 63, described the move as the “culmination” of his career.

“Everything I have done up until now has been a building block for this moment,” Durrett said, who jokingly added he does not plan to stay in the role for 32 years.

Stockert said he hopes there will be broader buy-in by having all the groups working together. 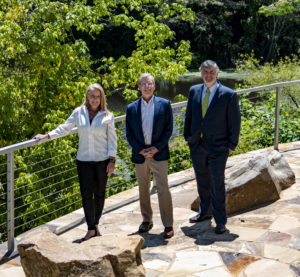 “I don’t see any downside to this,” Stockert said. “We want to make sure that the Buckhead Coalition is broadly representative of the community. We want to involve younger members, more women and more minorities. I think we’ve come to a very good place.”

Denise Starling, executive director of Livable Buckhead, has been working in Buckhead for 20 years. Livable Buckhead has been co-located with the Buckhead CID, and it has focused on quality of life issues and building relationships between the business community and the residential neighborhoods. One of its lead projects has been the development of Path400, a multi-use pedestrian and bicycle trail along Georgia 400.

“When we started in 1999, Buckhead was highly polarized,” Starling said. “The merger will make our coordination and cooperation far more formalized. I think we will be a lot more effective by being able to leverage our organizations.

Everyone wanted more of a unified voice for Buckhead. We’re now under one umbrella.”

Matt Thiry, the 2020 president of the Buckhead Business Association, agreed.

“We have the opportunity as four distinct entities to work more collaboratively and provide greater efficiencies for all of us,” Thiry said. “All four organizations have done a great job independently for years, but this is a good way to move forward together.”