The historic building at 2395 Peachtree Road that is home to Peachtree Battle Antiques & Interiors and formerly housed a book bindery and the bookstore Oxford Too is planned to be partly or wholly saved in a condo redevelopment. Credit: Georgia Trust for Historic Preservation
Share
Tweet
Share
Pin
Pocket
WhatsApp
Buffer4
Email
Reddit
4 Shares

A historic brick building in Buckhead that once housed a book factory and a beloved bookstore would be largely preserved, after years of community efforts, as part of a surrounding condo development that recently won zoning approval.

Currently home to Peachtree Battle Antiques and Interiors, the building at 2395 Peachtree Road began life in 1929 as the National Library Bindery Company and, in the 1990s, housed the bookshop Oxford Too. Its lead architect was A. Ten Eyck Brown, who also designed the Fulton County Courthouse and the Sweet Auburn Curb Market.

Known locally as the “book bindery,” the building was threatened with demolition by a 2016 apartment complex plan, earning it a place on the Georgia Trust for Historic Preservation’s 2018 statewide list of “Places in Peril.” Developer Branch Properties agreed to save a front portion of the building, but that project fell through.

Now the Kolter Group has a condominium tower plan for the site and a more detailed agreement that calls for preserving roughly the front half of the historic part of the building, including a house-like structure and part of the original manufacturing space. In the rear, about two-thirds of the original manufacturing space and a more recent, L-shaped addition would be demolished. The written agreement with the Peachtree Hills Civic Association also calls for preserving the historic facade and having the construction phase monitored by quarterly reports to the Atlanta Preservation Center. 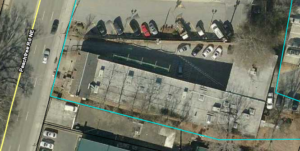 The book bindery building as seen from above in an image from the Fulton County Board of Assessors website. The house-like entrance faces Peachtree Road, with the original manufacturing area and an L-shaped addition extending far to the rear. Much of the rear area would be demolished, with the front 2,600 square feet preserved, in the agreement with a condo developer.

The condo plan won approval for a zoning variance related to its 219-foot height at an Aug. 5 hearing of the Atlanta Board of Zoning Adjustment, which was partly based on support from Neighborhood Planning Unit B contingent on the preservation agreement. The variance had no opposition and requires no further approvals. Preservationists said they understood the agreement would be incorporated into the zoning ordinance by the City Council, but the council does not vote on variances and the agreement will remain a private contract, according to the office of City Planning.

Even if the condo project doesn’t work out for some reason, the agreement is binding on any other developer that might acquire the property from Branch.

Laura Dobson, a Peachtree Hills resident who led the preservation advocacy, praised the developers, the civic association, NPU-B and the APC for coming together on the agreement.

“It was a long and winding road, but I hope their efforts inspire other projects to embrace special places,” said Dobson. “And I really hope someone many years from now might notice the bindery and wonder what its story is. That will be the reward for everyone’s effort.”

APC Executive Director David Yoakley Mitchell said he believes the agreement is unprecedented in Atlanta in terms of a developer agreeing to what amounts to permanent, landmarking-style protections on a historic structure. Mitchell said he hopes it will be “seminal” to future deals and show developers the added values of “character, depth and feeling” that preserving historic structures can bring to a project. He also said it’s a significant preservation win for Buckhead.

“For Buckhead, this is a great success, because it starts to show a thawing or a potential awakening for the equal respect that Buckhead is not only a part of Atlanta, but [also] its architecture and its culture,” said Mitchell.

The agreement specifies not only preserving but also maintaining the front section of the book bindery as a stand-alone building. It also says the facade will not be changed “in any manner that is inconsistent with the historical character thereof,” and that it will be restored to its original condition if it is damaged for any reason. Any new entryway also must match the “style and character” of existing ones.

One part of the agreement that is still imprecise is exactly how much of the front section would be preserved. The agreement refers only to the front 2,600 square feet. Dobson said the local understanding is that equates to cutting the building off in the area of a current loading dock door.

The agreement does not preclude further historic designations or protections that might come in the future, such as official City landmarking, according to Mitchell.

While the deal is good news for preservationists, it is not for the antique market, which houses about 40 individual dealers. Owner Robert Ahlers says that after the demolition — which would reduce the floor space by over 80% — the book bindery no longer would have enough room for the market.

“Unfortunately, we will not be able to remain in the space and we are currently searching for a new location,” said Ahlers.

Westmoreland said the book bindery would be suitable for restaurant or other retail uses.

Westmoreland could not specify a construction timeline, but assuming the council approves the zoning variance, there are no further City process besides construction permitting.

Kolter’s condo tower plan also includes two adjacent properties at Peachtree and Terrace Drive. The tower would wrap around the preserved part of the book bindery.

Kolter is currently constructing another condo tower, dubbed the Graydon Buckhead, about a block north at 2520 Peachtree.

Correction: A previous version of this story incorrectly said that City Council approval of the zoning variance is required.