Created by the City Council to satisfy one neighborhood’s myopic fixation with its crime rate, the Buckhead Public Safety Task Force is unsurprisingly zooming out to focus on statewide and national causes, to wit: gangs.

But is that highlighting an underappreciated problem, or is it another version of the reductive and politicized exaggeration which fueled a Buckhead cityhood movement — with its claims of a “warzone” only a new police force could solve — that the task force exists in part to address? The answer may be both in a process that regardless is revealing oodles of information about police and prosecutors’ efforts as the group speeds toward issuing its recommendations in May.

In recent meetings of the month-old task force, no less an authority than the Fulton County District Attorney Fani Willis, using GBI data, claimed that 70 to 90 percent of violent crime in Atlanta and Georgia is gang-related. But the GBI also acknowledges that its data on gangs is sketchy and full of holes. The authorities interpret those holes as meaning gangs are even worse than their files show — or as Willis proclaimed: “Somebody write that down, ‘underreported’!” Unreliable would be another term for such flawed data, notes Georgia State University criminologist Volkan Topalli.

There’s no question criminal gangs are in Georgia, and that the stakes can be high. In one infamous example, former Mayor Keisha Lance Bottoms’ nephew was murdered in a mistaken-identity gang shooting in 2014. “We’re not gonna win [the anti-gang battle], for lack of a better term, but we can lose,” said Ken Howard, the GBI’s special agent in charge of a statewide gang task force, to the Buckhead group. He painted a picture of national gangs ranging from Mexican drug cartels to white supremacists to L.A.’s Crips and Bloods all establishing themselves in Atlanta, in some cases supplanting old-school neighborhood gangs. It literally was a picture, including databases that show roughly where various individual gang members live in the city. (Very few in Buckhead, by the way.) 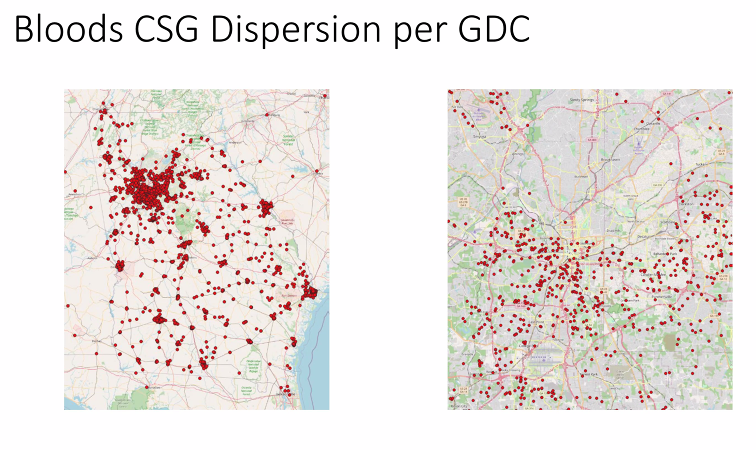 Maps of the locations of members of the Bloods street gang in Georgia and Atlanta as identified by the Georgia Department of Corrections and displayed by the Georgia Bureau of Investigations at a March 8 meeting of the Buckhead Public Safety Task Force.

And it’s a picture that is getting support from Republican legislators. Willis called for support for Senate Bill 359, pending General Assembly legislation that, among other things, would make it easier to prosecute gang members for offenses collectively committed in various Georgia jurisdictions.

But how are gangs and gang members defined? Howard says the GBI largely relies on members’ public or private self-identification or their classification by the Georgia Department of Corrections while they are prisoners. He called it “not a perfect system, it’s not a comprehensive system… but it’s one of the best we’ve got right now.” Despite the percentages being tossed around, he said he couldn’t estimate what percentage of crime is committed by gang members compared to unaffiliated criminals due to such data gaps as many police departments not classifying crimes that way. “I can tell you the number is much higher than whatever you’re going to be handed,” he said.

Those are significant data gaps, Topalli tells me — and only me, because the Buckhead task force does not include any independent criminologists, nor have any been invited to speak — that defining “gangs” and “gang-related” violence is challenging. Even when gangs are a definite problem, dismantling them with prosecutions via the federal Racketeer Influenced and Corrupt Organizations (RICO) Act or state equivalents is a complex, multiyear effort — only part of a solution that must include short- and medium-term efforts, too.

Topalli says he thinks gangs are a problem in Atlanta, particularly in certain elements of the music and club scenes, but most of the drug dealers and other low-level criminals whose lives he studies do not identify as gang members, he said.

“The gang thing is tricky,” said Topalli. “I think we have a very simplistic idea of what gangs are… The extent to which a group becomes a criminal enterprise, I don’t think anyone has good data about.”

These issues aren’t just academic to Topalli. He was the victim of one of Buckhead’s recent notorious crimes, as he was struck last year by a stray bullet when an argument turned into a shootout at Lindbergh Plaza — one of the current crime hot spots. He says he understands that the defendants in the case have records of other criminal activity.

“Is that gang activity? By some definitions, yes,” Topalli says of his own shooting. “But was that incident of violence gang violence in itself? I don’t think so.”

A certainty, he adds, is that “gang” is a term that “freaks people out” and is thus embraced by politicians of all flavors as politically useful in satisfying calls for crackdown-oriented crime approaches — even if those aren’t all that effective. The causes of crime are complex, he says, especially with the wacky effects of the COVID-19 pandemic, and solutions must be holistic and strategic.

Topalli expressed extra caution that the task force is akin to the cityhood movement in presuming there’s something special, and perhaps worse, about Buckhead crime — even though it has the city’s lowest crime rate. “So part of the problem is, [the Buckhead crime discussion has] been politicized so the information’s not particularly accurate, and part of the problem is, in that politicization process, the responses and the recommendations have been simplistic,” he says.

Willis indicated she is sensitive to criticisms that hers is a lock-’em-up approach, emphasizing that her targets are hardcore gang members. For the task force, she reeled off diversion efforts to get people out of gang and/or criminal life, including a carpentry training program that already has 80 enrollees, a gang-specific contingent of young people headed to the Atlanta Police Foundation’s At-Promise diversion programs and new anti-crime classes for Fulton County Schools students.

But the hard-charging D.A. made no bones about her focus on gangs as the problem, including hiring RICO-experienced new prosecutors. She described gangs as insidious and, in a nod to cityhood politics, praised Atlanta’s new administration for taking them seriously.