Mayoral candidate Bobby Wilkes in a photo from his campaign website.

In a mayoral campaign year where the Buckhead cityhood movement has become a major issue, the race finally has a candidate from that neighborhood — one who previously backed the separation in online comments saying locals should let the rest of Atlanta “burn to the ground.”

Robert “Bobby” Wilkes, a real estate investor and former University of Georgia football player, filed state campaign paperwork June 21 to join the crowded race. His campaign website describes him as “The ‘Thank Police’ Candidate” and says he is focused on crime as well as corruption, ending COVID-19 restrictions, and creating affordable housing without significant zoning changes.

Wilkes, a 25-year Buckhead resident, says his earlier comments were an expression of frustration and that he hopes to gain the support of cityhood backers for a reprieve in the movement.

“I know that they say the ‘divorce is final’ between Buckhead and Atlanta, but I would like for them to give me a chance to win this election and turn the situation around,” Wilkes said of Buckhead cityhood supporters. “If we don’t, I fear that there will be more than just Buckhead folks leaving.” 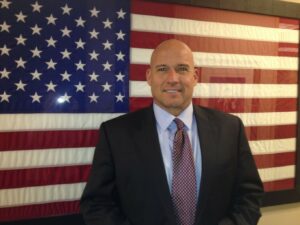 Mayoral candidate Bobby Wilkes in a photo from his campaign website.

However, in July 2020 posts to a Facebook account now used for his campaigning, Wilkes wrote that Buckhead and Midtown should leave Atlanta to become their own cities. “Let’s let Atlanta burn to the ground with their Mayor and let’s make Midtown and Buckhead safe,” he wrote. “… Leave Democrats to kill each other and burn down their own neighborhoods and let’s protect ours!”

His comments also suggested the separatist areas could become a “safe zone,” meaning a “Republican controlled area,” against crime and where controversial Confederate statues could be relocated. In many other posts Wilkes supported former President Trump and caustically criticized various Democrats and left-wing activists.

Wilkes now says those comments came at an emotional time during protests. “Under no circumstances am I for Atlanta burning to the ground! That comment was made more out of disgust for the safety conditions of cities in all parts of the country where weak mayors are in control and the cities are suffering,” said Wilkes.

A group called the Buckhead Exploratory Committee, largely citing crime concerns, is promoting separate cityhood for the neighborhood and got state legislation filed earlier this year to begin a lengthy process that would study and seek a public vote on the idea. The effort has been condemned by Atlanta Mayor Keisha Lance Bottoms and local business organizations, and is opposed by another local group called the Committee for a United Atlanta.

Update: This story has been updated with comment from Wilkes about his current cityhood position.