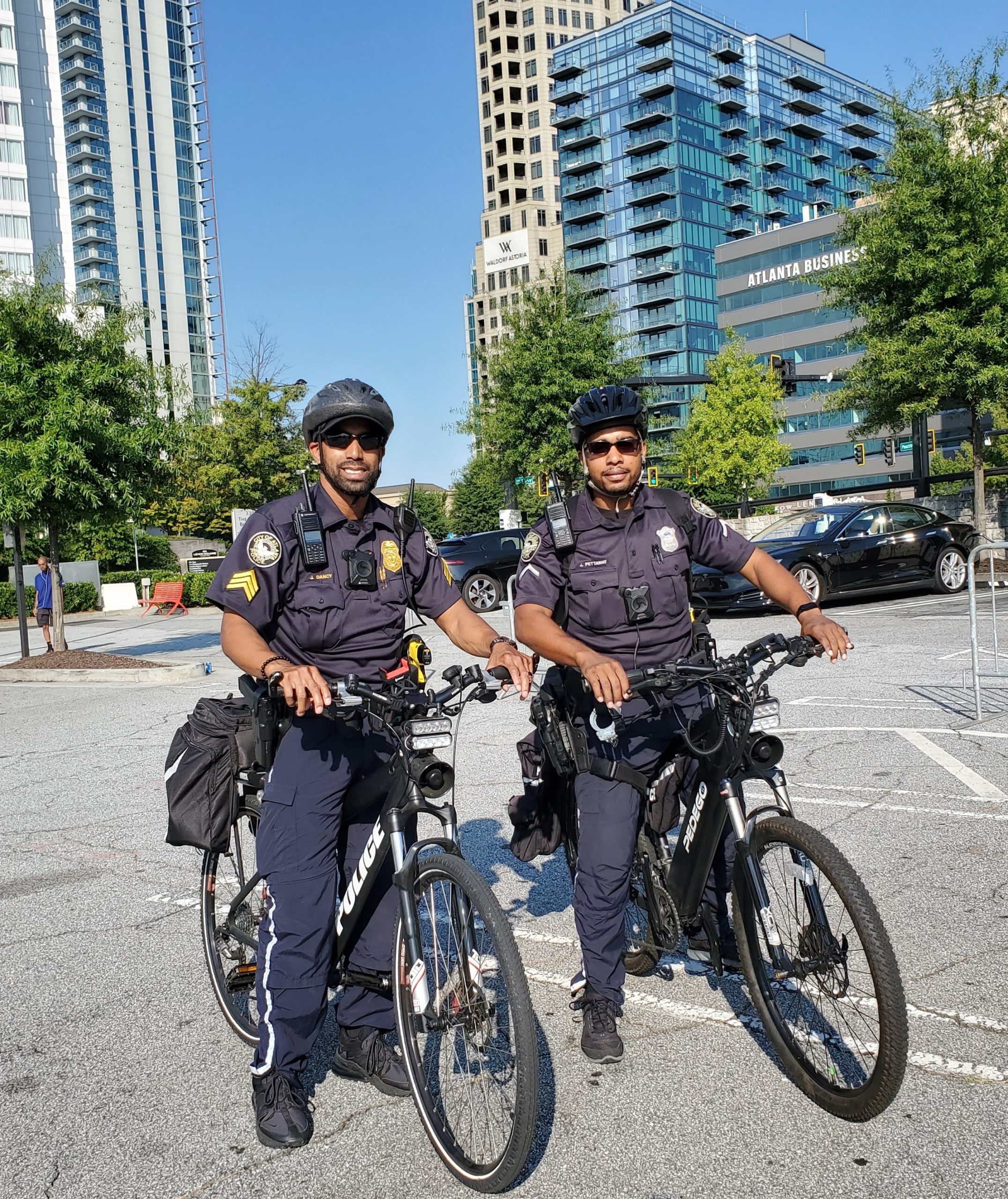 A little more than a year ago, the Buckhead Community Improvement District partnered with the Atlanta Police Department to implement a bike patrol to combat crime in the area. Every weekday four off-duty APD officers who are certified as part of the department’s Bicycle Response Team patrol parking garages and parking lots throughout the commercial district, adding visible policing to deter crime.

What does a typical workday look like for a bike patrol officer in Buckhead?

My days usually start out with a “loop.” I like to take a ride around without making many stops to just get the feel of what’s going on for that day…see if anything looks out of place or if there’s any strange feeling in the air. I know that sounds odd, but I’ve always said since I began in law enforcement that some days I get a “cop feeling.”

After I’ve done that, I start making specific stops and planned stops. Often, I will stop in different businesses while at other times I’ll just ride through the parking lots. I’m allowing myself to be seen in order to let them know that I’m here for them. While allowing myself to be seen by the business owners, guests and the business community at large, I’m also able to be seen by those who would cause harm to the harmony that we are working so hard to maintain in the Buckhead business district.

How important is the visible, active community presence of the bike patrol in Buckhead? What role do your daily interactions play in deterring crime and building confidence in public safety?

Of course, presence is everything. That’s why it is a daily part of my routine. Actually, it’s not just a part of my routine… it is my routine. Most people are used to seeing a police officer in his or her vehicle. The only time that the officer gets out of the vehicle is if there’s a “bad” situation… a traffic ticket, or a call for service after something bad has already happened. This is the responder part of first responder. Something bad happens and we show up to fix it.

Can you share an experience from your time on bike patrol that illustrates its benefits?

During my patrol one day a few months ago I stopped outside of the Iron Hill Brewery. I was sitting on my bike enjoying some light conversation with some of the patrons who were eating on the patio. It was at that time that I noticed some activity at the corner of Peachtree Rd. and Lenox Rd. Just as the activity caught my eye a call came over the radio with complaints of water boy activity. I quickly ended my conversation with the folks on the patio and responded to the location in seconds, while it took a car several minutes to get arrive. Upon my approach the young men saw me and began to scatter, and that’s where I got a real workout in for the day and these gentlemen began running in all directions. I rode up and down the hill trying to at least make contact with one or two of them. Although I was not able to make contact with either of them, they did clear the location and traffic was allowed to flow unimpeded. A few minutes later I noticed that they had relocated to Lenox Rd. and Phipps Blvd., so I pursued them again and this time they left the area completely. Several minutes after they left, a patrol car was finally able to make it through traffic and arrive on scene.

That ability to respond quickly is one of the biggest assets that a bicycle patrol offers. It is incredibly beneficial for deterring crime in areas that are difficult for patrol cars to reach quickly.