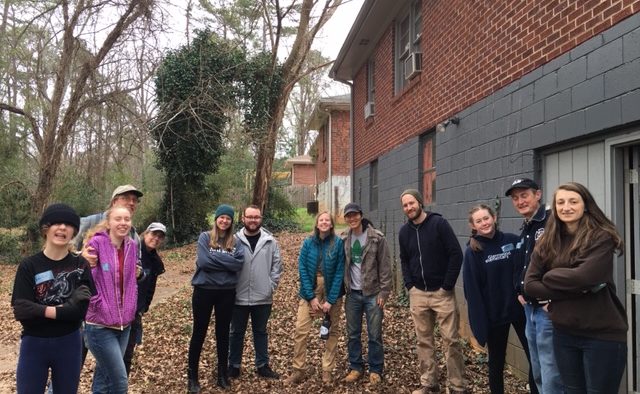 Southface staff and friends during the orientation to the house they would be working on during the MLK Service Project in Decatur, GA

This year, on January 18-20, fifteen current and former Southface staffers joined the 954 volunteers in the service project, contributing their building science expertise. The project helps at-risk senior citizens of Decatur remain in their homes safely and comfortably, all the while getting to know some of our neighbors. 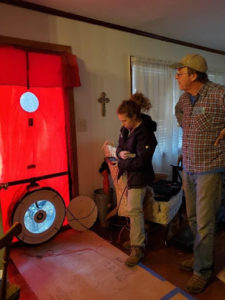 “This is an amazing project and one that I’ve been helping out with since my days as an intern at Southface,” says Amelia Godfrey, Southface Program Manager for EarthCraft. “Not only is it a great way to give back, but you also learn from other volunteers on ways to improve your own home.”

Highlights of the team’s work included insulating the attic, attic access door and hot water pipes; duct-sealing the HVAC; adding a whole-house fan cover; cleaning HVAC filters, vents and a dryer filter; sealing the windows and doors; switching out lightbulbs with LED bulbs; and digging a swale in the yard to facilitate better water drainage. By performing blower-door tests at the beginning and end of the weekend, the team measured a 20% reduction in the home’s air leakage, which increases the home’s heating and cooling efficiency and will lower utility bills for this resident.

Because of this year’s high volunteer turnout, the Southface team—including representatives of other partner organizations and a group of Boy Scouts—was able to complete the work on their assigned home early and began work on a second home, which was completed later that week.

“When we came back on the second day, our senior homeowner raved about how warm she was,” says Mike Barcik, Technical Principle for Education, who heads Southface’s involvement in the project. “She had to turn down her thermostat on Saturday night because we did such a great job on insulating and sealing her house!”

Overall, this year’s MLK Service Project volunteers worked on 32 homes and contributed approximately 10,500 hours of volunteer effort, valued at a $267,000 impact to the community.

How to Get Involved

Your organization can get involved in affecting positive change for low-income seniors in Decatur by joining Southface’s Corporate Volunteer Program. Run in partnership with the City of Decatur, the program weatherizes and insulates low-income senior homes. For more information, please contact Kelsey McNamara.

What the 2020 Georgia Energy Code Updates Mean for You