Georgia has endured endless months of repetitive campaign ads and messages spotlighting our weaknesses or strengths in education and the economy depending from a candidate’s point of view.

But what speaks volumes is what has been left unsaid.

We have heard repeatedly that we have the highest rate of unemployment. We already know we have among the lowest average SAT scores in the nation and rank low in high school graduation rates.

Yet no one is mentioning that the Georgia State Council for the Arts budget is the lowest per capita in the United States.

Did anyone ever stop to think that there may be a relationship between our state’s lack of investment in the arts and its poor performance in education?

Did any of our candidates running for public office link the health of our state’s economic future to our artistic environment as one that fosters innovation and creativity?

Therein lies the big disconnect for even the most astute observers.

We can be ranked the No. 1 state for business but still have the highest unemployment rate and rank among the lowest in public education outcomes. We can boast of having some of the most natural beauty and temperate climates of any state in the nation, but we still have some pieces missing when we try to put together a pretty picture portraying a high quality of life.

What’s missing? Living in a state that is willing to invest in our social fabric, in our cultural amenities, in our soft-scapes as well as our hard-scapes, creating places and spaces where magic and special experiences will happen.

Candidates running for office in Georgia are fearful to talk about such “frivolous” expenditures – scared that they will be accused of wanting raise taxes or of government overreach, preferring instead to play it safe by not investing in the present or the future – which in the end is the most dangerous play of all.

So where does that leave us?

City Observatory released a report last month showing that college graduates were flocking to cities instead of suburbs — a big shift from 2000. Well-educated young adults were 126 percent more likely to move to a city after college than they were in 2000.

The young adults also were selecting which cities they wanted to move to – a great indicator of which cities would be the economic engines in the future.

So a state wanting to secure its major metro area to have an economic future would make sure it would be appealing to young adults. All of a sudden, those “frivolous” expenditures in a metro area’s quality of life — from the arts to parks to alternative transportation to streetlife to cultural amenities and to magical places — may not seem so frivolous after all.

In fact, to forward-looking leaders, those expenditures would be strategic investments that would make metro Atlanta and Georgia more competitive in the future. 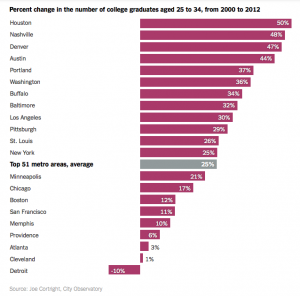 Young adults and their cities of choice 2000 to 2012 (Source: City Observatory)

But metro Atlanta and Georgia have not been making those kind of investments. According to City Observatory, the Atlanta region ranked third from the bottom among the 51 largest cities in the United States in the percent change in the number of young adults from 2000 to 2012. Only Cleveland and Detroit fared worse than Atlanta.

In a recent op-ed, Lisa Cremin, director of the Metropolitan Atlanta Arts Fund at the Community Foundation for Greater Atlanta, simply stated: “Public support of the arts is key to a healthy arts sector. It provides organizations with reliable revenue, fuels smaller arts groups, enables large arts institutions to present programming that is free to the public, and signals to other funders that the arts are essential to civic life.”

Cremin was bemoaning the decision of Georgia Shakespeare to dissolve after 29 years because it faced short and long-term debt issues. In the past three years, the region has lost two other theater companies — Marietta’s Theatre in the Square and the Theater of the Stars.

Not only is state funding for the arts shrinking, so is local funding. Fulton County’s 2014 contracts for services budget was $750,000 compared to $2.7 million in 2001. Small and mid-sized arts organizations have been hit especially hard.

Although there are about 200 active, nonprofit arts organizations in the Atlanta region, only four have operating budgets of more than $2 million — the Woodruff Arts Center ($111.7 million); the Atlanta Ballet ($9.2 million); Atlanta Opera ($5.9 million); and the Center for Puppetry Arts ($3.6 million).

On Saturday night, Nov. 1, at the second to last performance of August Wilson’s — “How I Learned What I Learned,” Fulton County Commission Chairman John Eaves handed True Colors artistic director Kenny Leon an oversized check for $30,000 with the condition he had to spend the money by the end of the year.

“No problem,” Leon assured Eaves in front of a nearly sold-out crowd at the Southwest Arts Center.

It was the last weekend of campaigning before the Nov. 4 election, and candidates were making their rounds, repeating their messages about jobs, education, unemployment, outsourcing, rubberstamping.

As candidates went on and on and on with their rehearsed political lines, it was all about the words left unsaid that broadcast the disconnect in our state and our city.

The standoff between the Atlanta Symphony Orchestra musicians and the Woodruff Arts Center played on. So as an ode to symbolism, no music emanated this past weekend from Atlanta’s symphony hall to soften the sounds of our political discourse.