Scaffolding rises on a smokestack at the former Fulton Bag and Cotton Mills in Cabbagetown as part of a historic rehabilitation project that comes with a big bill. (Photo by Kelly Jordan.)

Scaffolding has risen like a banner for historic preservation on a smokestack at Cabbagetown’s old Fulton Bag and Cotton Mills, marking the long-awaited start of rehab work on one of Atlanta’s most significant structures.

An equally fitting metaphor would be that it’s rising like the temperature in internal discussions among the complex’s condo and apartment residents about how to pay for the work and avoid possibly displacing less wealthy owners. The condo owners’ association has a Dec. 15 vote on a special assessment fee for that and other work that could top $1.1 million. 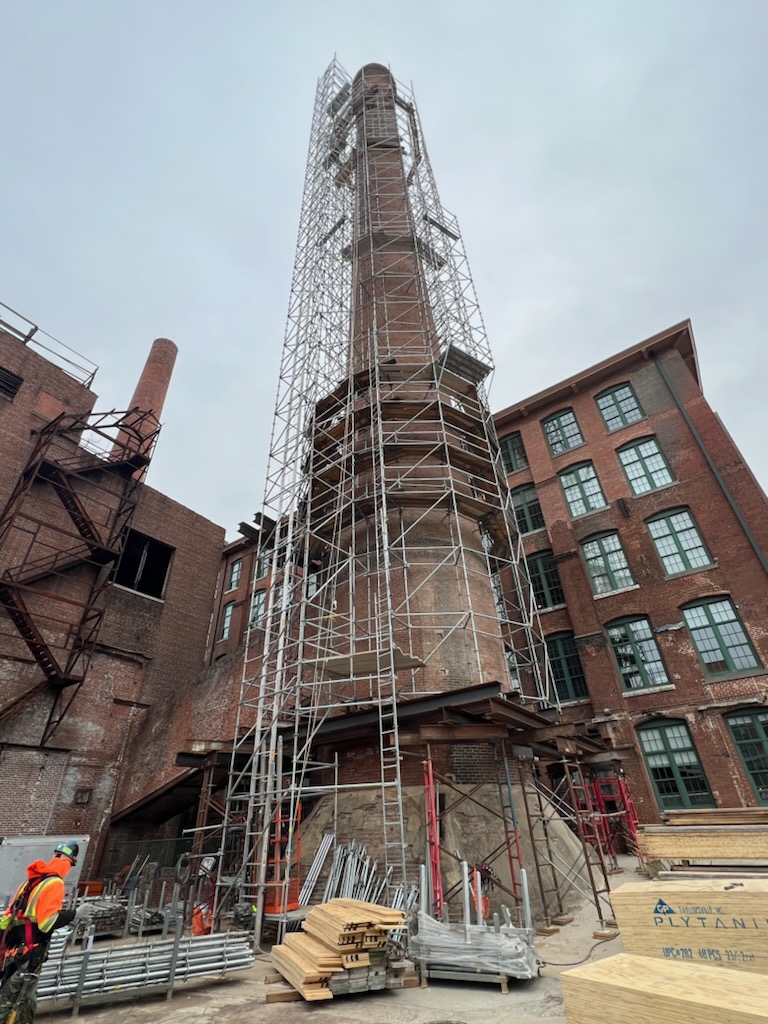 Scaffolding rising on a smokestack at the mill for historic rehab work. (Photo by David Yoakley Mitchell/Atlanta Preservation Center.)

In rapidly growing and densifying Atlanta, deferred and disputed building maintenance is a massive hidden issue, a kind of time bomb that could threaten many buildings and bank accounts – and not just historic ones. Think about what all those quick-built housing boxes along the BeltLine will need – and cost – in 20 or 30 years, and what that could mean for condo fees or rents in the smattering of quasi-affordable units.

At places like the mill, deferred maintenance factors can include a lack of awareness of the common area responsibilities and historic site stewardship, compounded by owner turnover and lack of institutional memory. The current work is happening at the prodding of Easements Atlanta, a preservation nonprofit that, thanks to the complex’s original restorers in the 1990s, holds ownership rights on some facades and elements and can legally prevent their demolition as well as demanding their rehabilitation to national standards.

“This is, in some ways, the complexity of success,” said David Yoakley Mitchell, an Easements Atlanta executive board member who also heads the nonprofit Atlanta Preservation Center (APC). Back in the 1990s, the mill was a pioneering example of adaptive reuse in a project costing tens of millions of dollars – but the costs of keeping it that way don’t get the same spotlight.

Jacob Elsas is a resident of the condos and the great-great-grandson of the guy who founded the mill in the 1880s. He and his spouse Nina run the Patch Works Art and History Center, which is devoted to the history of the mill and Cabbagetown. He said he’s prodded the condo association for several years to develop a long-term rehabilitation funding strategy including outside grants. Nina just wrapped up her master’s thesis at Kennesaw State on how to secure such support and inspire stewardship.

Big as the current bill is for the current work – involving two smokestacks, a water tower and a boiler plant – it’s just the first phase of other needs.

“The elephant in the room is how to pay for the long-term preservation of not just these structures, but all historic elements around the mill,” Elsas said. “…Unless the entire condo side eventually becomes a bunch of filthy-rich one-percenters, there’s simply no way to maintain these historic structures in perpetuity” without an outside funding strategy, he said.

Mitchell said that such outside sources exist and that the “overwhelming” costs of deferred maintenance can indeed lead to “economic gentrification” in historic properties. But in historic preservation, he’s seen even some of the wealthiest people and institutions claim to be unable to afford to save a building. He points to an underlying psychology many of us share – an unwillingness to spend on what is seen as unsexy.

And for historic properties, that can be even harder amid a lingering attitude where “anything that involves culture, identity or the humanities is seen as a burden.”

The mill complex today is divided into an apartment section called the Fulton Cotton Mill Lofts, owned by TriBridge Residential, and the 299-unit condo complex known as The Stacks. The current work is happening because TriBridge, a large corporation, agreed to pay its portion and some other elements right away, according to Elsas. It remains to be seen if that will impact the apartment rents. TriBridge and the condo association president did not respond to comment requests.

Going back to our original metaphor, there is certainly excitement about that work, which is being conducted by specialty contractor Beacon Construction, which has an executive on the APC board. Among the work is removing invasive vegetation and repairing cracks, Elsas said. 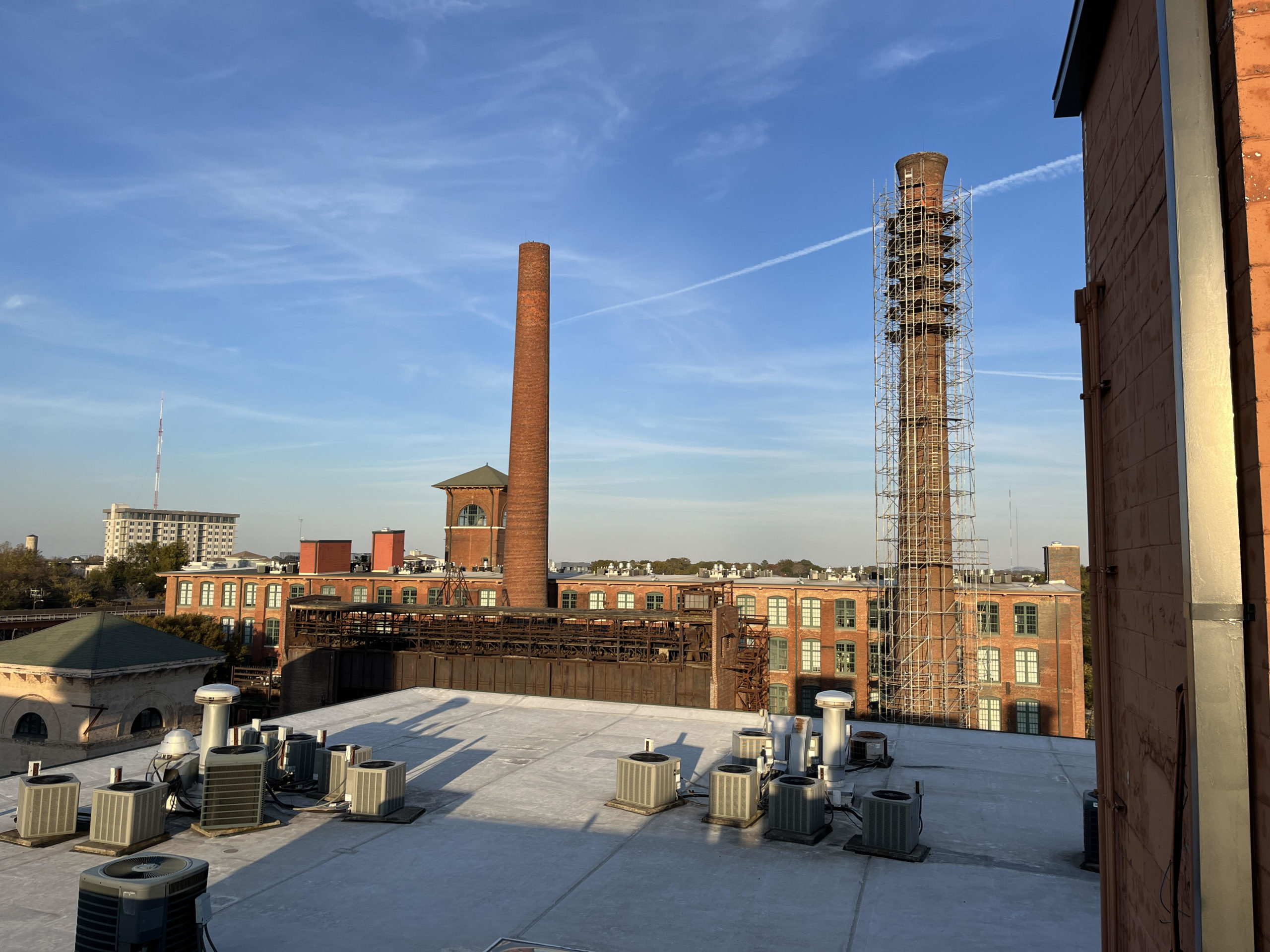 A view of the rehab work from The Stacks, the historic mill’s condos. (Photo by Jacob Elsas/Patch Works Art and History Center.)

“This is great. This has to be done,” he said. “The history does matter and people [living there] do want to take care of it.”

It hearkens back to the efforts to save the mill, which was a major economic engine for a century and literally created the Cabbagetown neighborhood as a company town. Soon after shuttering in the early 1980s, the complex was bought by a neighboring railroad company now known as CSX and began its first round of lack of maintenance that threatened its integrity. Local preservation agitation in the 1990s led to its purchase by Aderhold Properties, which undertook a massive rehabilitation – the first phase alone costing $50 million, according to media reports. In part, that was done with tax credits that ensured some low- and middle-income housing.

Aderhold’s work wrapped up around 2008. That left one major structure, the former power plant, largely untouched, and no major rehabilitation has been done since then until TriBridge bought the apartment complex from them last year, according to Elsas. Mitchell said such deferred maintenance has “the same premise as a credit card – ‘I’ll pay for it later,’ and that number follows you around.”

Elsas said a daughter of Aderhold’s owner lived in the condos at one point and, like him, called for seeking grants for long-term upkeep. He said there was “pushback” based on not wanting to do it or doubting it would work. He’s also interested in bringing a Patch Works museum to the site, perhaps in a power plant rehab.

With the current work’s bill hanging over their heads, Elsas said, the condo association has secured a loan where owners can pay their share – which varies by unit square footage – upfront or over time with interest. But anecdotally, the bill may already be triggering some displacement.

“The timing is such that you kind of put two and two together,” Elsas said. “There’s been a lot of turnover since the discussion of the special assessment came up because this will be tacked onto sales.”

That goes the trickiness of “always trying to walk a tightrope” between preserving the building and preserving its community, Elsas said. While some of the units have become spectacular and luxurious, it’s also still a place for lower-income residents, some of who rented their places before the condos existed.

“These are not incredibly wealthy people,” Elsas said. “Part of what Nina and I believe is, we believe in community. We believe in homeownership for community, not just a commodity.”

At the same time, they propose that raising the community’s awareness of – and agency in – historic stewardship can help to secure more outside support, as well as combating other preservation threats, like the controversial antennas CSX recently proposed next door. A new state historical marker on the way next year might help, too.

“If we, as owners here, effectively become stewards of this incredibly important site,” Elsas said, “it just gives us more validity if we go out and say, ‘Look, we’ve got one of the most historic sites in the city of Atlanta and we help take care of it.’”