Note to readers: Michelle is on hiatus. Her column is authored by her husband, veteran journalist Ben Smith.

Carolyn Barbay of Atlanta climbed out of the grief she had over losing her husband by re-discovering the music of her home state of Louisiana and learning the Cajun two-step and waltz. 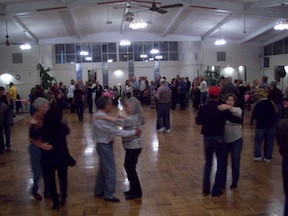 Earlier this month, 200 dancers attended the Atlanta Cajun Zydeco Association’s monthly fair do do near Buckhead.

Instead of driving eight hours, she only had to travel a few miles to the Knights of Columbus Post 660 at Buford Highway near Lenox Road, home of the Atlanta Cajun Zydeco Association’s monthly fais do do (parties) featuring a live band playing authentic swamp music.

She found a tribe bound not by blood, geography, language, culture, ethnicity or religion, but by a deep love of the forward-driving, accordion-centric sounds of Acadian music from Louisiana. That, and all of the forms of two- and three-step swinging that go with it.

“I was ready to live again,” Barbay, 74, recalled earlier this month, as the sounds of a four-piece band called Creole Stomp drew couples to the large parquet dance floor, where the dancers flowed counterclockwise as they stepped and spun. As the heat rose in the cinderblock hall, the ceiling fans couldn’t keep up, and the double doors opened to a spectacular view of the downtown Atlanta skyline – a reminder of how easily music closed the miles from Louisiana.

This week, Mardi Gras draws attention to the “laissez les bon temps rouler” culture of New Orleans, which for Barbay and others has been a constant lifeline of hope and optimism in the face of devastation — long before Hurricane Katrina.

The defining sound of Cajun and zydeco music comes from the accordion, which links some of these aficionados to their ethnic roots in cultures across Europe. Just as its distinctive sound comes from expanding and contracting, so has this group grown, shrunk and re-expanded in the face of economic struggle, tough breaks and personal loss. 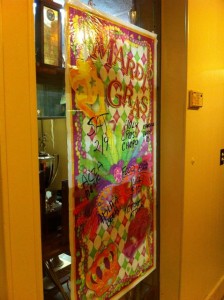 Mardi Gras poster at the ACZA fais do do.

Only a small number of the ACZA members are from Louisiana; most are from points far from the South, but have found in the swamp music a powerful emotional force of recovery, a soundtrack for their own rebuilding.

“I wanted something that was life affirming,” said Lisa Przepasniak, who discovered the group in 2001 after recovering from several years of continuous migraine headaches. The relationships carried her recently as she battled breast cancer.

“I fell in love with the music and the culture, the bayous and the way the people talk,” she said. She travels often to Louisiana and has even developed one or two Big Easy eccentricities. At dances she is often accompanied by her companion, Alphonse Bubba Anthony Thibadeaux, a furry armadillo party-hat-wearing puppet on her shoulder.

The membership is a patchwork, with no consistent profile. Przepasniak is from Buffalo, N.Y. and is ethnically Polish. Larry Hickey, ACZA’s treasurer, is Irish.

Their only connection is the accordion, played in the polkas Przepasniak heard growing up, and in the country and western tunes that Hickey routinely heard in rural Irish pubs in County Galway. 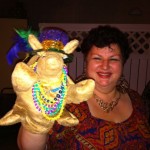 “Over there they use accordions, not steel guitars,” Hickey said, during a break between songs.  “So if you grew up listening to country music on accordions and you start listening to Cajun music, you’ll get hooked.”

Barbay is one of the few members who are expatriate Louisianan. She left Sicily Island, La., in 1986, and she is quick to point out that it’s not an island. “It was a little old country town,” she said. “We didn’t do all that stuff. All we did was fishing when I was there.”

To learn to dance Cajun-style, she showed up at the Knights of Columbus, which stands on a bluff right on the DeKalb County/Fulton County line.

Her teacher was   Robert Kwasha, a transplant from New York. From him, she learned that this music is “joie de vivre; it’s an expression of the joy of life.”

“No matter how bad life is – my dog died, my wife left me — you can always go out on Saturday night,” said Kwasha. “The music is an expression of the positive nature of the Cajun culture.” 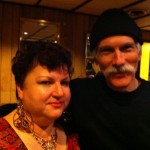 Kwasha, a musician, founded the Atlanta Cajun Dance Association in 1991 and is an amateur historian of the culture. People are drawn to all things Cajun, he said, because the music is infectious and Cajuns have always been known to be a welcoming people.

Cajuns — French-speaking people who migrated to Louisiana from France via Canada in the 17th and 18th centuries — intermarried with other ethnic groups and freely blessed those who represented the culture to others. Kwasha rattled off the names of several popular Cajun musicians who don’t have French-sounding names, among them Steve Riley and Dennis McGee.

During a break in the music at the K of C Hall, the lead performer dittoed Kwasha.

“You don’t have to be from Lousiana to love this music,” said Dennis Stroughmatt, fiddle player, accordionist and singer for Creole Stomp. ”It’s primal. It grooves. It’s impossible to sit still to this music because it reaches up inside you and gets in your blood.”

Stroughmatt should know. He and his whole band are from Illinois. Much closer to the northern stretch of the Mississippi River, he has devoted his entire musical career to playing Cajun and zydeco music. 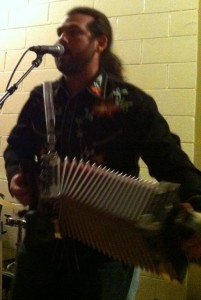 Dennis Stroughmatt, lead performer and accordionist for Creole Stomp, a band from Illinois.

A crowd of 200 danced to his band, a good night for ACZA, which, like some leaders and members, has weathered many storms.

The ACZA is the surviving institution from earlier efforts to share and celebrate in Atlanta this part of Louisiana culture. In 2006, Przepasniak co-founded ACZA, a not-for-profit tax-exempt organization, to replace the now-dormant Atlanta Cajun Dance Association and Lost in the Rhythm, an organization that had been dedicated to Zydeco music.

The recession hit ACZA, measured by a decline in membership and door receipts in recent years. Last year, a sister organization in Birmingham closed its doors, ending ACZA’s cost-sharing arrangement of bringing live acts for the monthly fais do do.

Leaders worried they’d have to raise ticket prices to keep bringing live music to their Knight of Columbus events.

“The Atlanta Cajun Zydeco Association is not going out of business,” wrote ACZA president Donald Baggett in a letter to group members last October. “The loss of Birmingham presents a new challenge, and we will not be altered by it.”

Baggett announced a matching donation drive. Przepasniak, the group’s co-founder, sought venues in Nashville, Savannah and other cities to schedule the Cajun bands on the same weekend as Atlanta, and thus fund some of their travel expenses.

Today, Cajun and zydeco bands are booked at the Knights of Columbus into June. (The next one is March 23 with Lil’ Wayne & Same Ol’ Two Step [tickets $5 to $17].  For Mardi Gras, local band Zydeco T is playing at Pappadeaux’s at North Point Mall in Alpharetta from 6 pm – 9 pm.)

“Failure isn’t an option, just like it never occurred to me that cancer might kill me,” said Przepasniak, who was waltzing on the weekends after her weekday cancer regimen.

“Despite the radiation treatments and the chemos and the surgeries, I was still coming here,” she said. “The people here have helped bring me through.”

The resilience of these dancers and their dedication to keeping the culture alive in Atlanta impressed a Louisiana native who dropped in after a long hiatus.

Jeaux Jeaux Trahan is a 47-year-old architect from Crowley, La who had joined an exodus from his home state during its economic downturn in the 1980s. A decade had passed since his last fais do do at the Knights of Columbus, and he noticed far fewer Louisianans than before, and far more non-natives who learned the hard way how to dance – and live – Cajun style.

“Back when it started there were a lot of wannabees,” Trahan said in admiration.  “The wannabees have come a long way.”

Ben Smith is a Decatur-based freelance writer. He can be reached at benzmyth@gmail.com.

Previous Article
U.S. Senator Johnny Isakson believes Senate can break logjam in Congress
Next Article
A future with a lot of ‘Hotlantas’