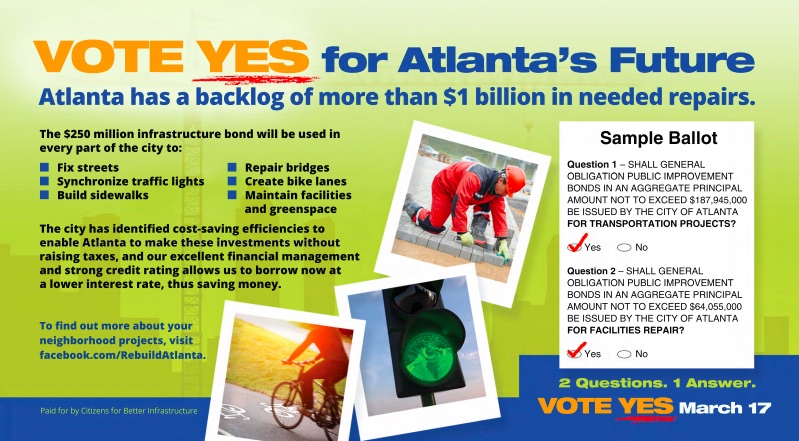 In one week, Atlanta voters will decide if the City will borrow $250 million in long-overdue infrastructure repair and upgrades via a bond referendum.

Atlanta officials have stated that the March 17 bond referendum will not raise taxes. 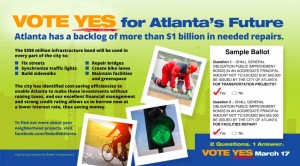 The referendum will put a minor, but respectable dent in its billion-dollar infrastructure backlog, the majority of which is transportation related.

After community meetings in all quadrants of the city, a draft list of potential projects has been drafted, with a final list to be selected upon approval of the referendum. It also will provide funding for much needed maintenance of a number of government buildings and parks.

The breakdown of citywide transportation projects include:

While the project list is yet to be finalized (the Atlanta City Council will vote on the final list following the referendum vote), priority will be given to certain projects.

Public information meetings conducted in 2014 resulted in more than 300 comments that mentioned “bikes” and “sidewalk” – a clear sign Complete Streets should be the norm.

Many of these projects were selected by the City of Atlanta for its 2012 T-SPLOST local funding bucket. One such project is DeKalb Avenue, which runs parallel to I-20 and is riddled with potholes, covered with metal plates and is one of the most confusing roads in the region.

The bond referendum will not cover the entire scope outlined in 2012; but it will alleviate concerns for every travel mode.

Atlanta resident Wendy Darling wrote in a change.org petition generated by the Atlanta Bicycle Coalition: “DeKalb Avenue would be a very convenient route between neighborhoods, especially as a way to reach Downtown Atlanta, but no matter how you are traveling it — car, bike, walking – it’s full of hazards. Potholes rattle cars and bikers alike. The sidewalks are crumbling and sometimes non-existent. The way the lanes are set up presents dangerous to cyclists. I personally walk on this street and am always on the lookout for traffic, even when I’m on the sidewalk, because it never feels like I’m safe as I am on sidewalks on other major thoroughfares.”

Rebecca Serna, executive director of the bicycle advocacy group said, “DeKalb Avenue is broken. The reversible lane is also known as a suicide lane for a reason – it’s unsafe and doesn’t perform the way it was intended. Converting the suicide lane into turn lanes at intersections and adding bike lanes would unclog backups, make it safer and improve traffic flow for everyone.”

These shovel ready projects should be completed within five years, although delays are to be expected.

Separate from the draft project list, each city councilperson will receive $5.4 million to fund district specific projects not included in the citywide list.

However, in a recent action alert to its members, pedestrian advocacy group PEDS urged the councilmembers to allocate funds to pedestrian safety projects.

“Residents in some parts of the city complained that too few projects were located in their districts,” said Sally Flocks, president of PEDS, the pedestrian advocacy organization, in an email. “In response, city officials shifted over $60 million to ‘local’ projects, with over $5 million allocated divided evenly between each of the 12 City Council districts.”

Originally pedestrian projects were not clearly earmarked. Instead they were lumped into a generic funding bucket for sidewalk repairs.

The city’s sidewalk infrastructure is grossly underfunded, to the tune of more than $100 million.

Just as the state legislature sorts through its transportation funding priorities, the city also faces a quandary when determining what makes the final cut.

The local projects are surely a source of frustration at the community level, even while there are larger, citywide projects that provide more pain for daily commuters.

The good news is folks are ready for these improvements to take place.

“Early voting is already underway and we’ve received positive feedback from across the city,” said Justin Giboney, manager of the campaign. “Everyone is excited about fixing the streets and making this a better city.”

The turnout model is based on the 2012 MOST campaign as well as other elections. We’re going to touch these core voters at least seven times, said Fred Hicks, who is also with the campaign. In addition to mailers and robo calls, radio ads will begin Monday with TV spots airing throughout the week.

For more information about the referendum and your polling location, visit Fulton County’s government website.