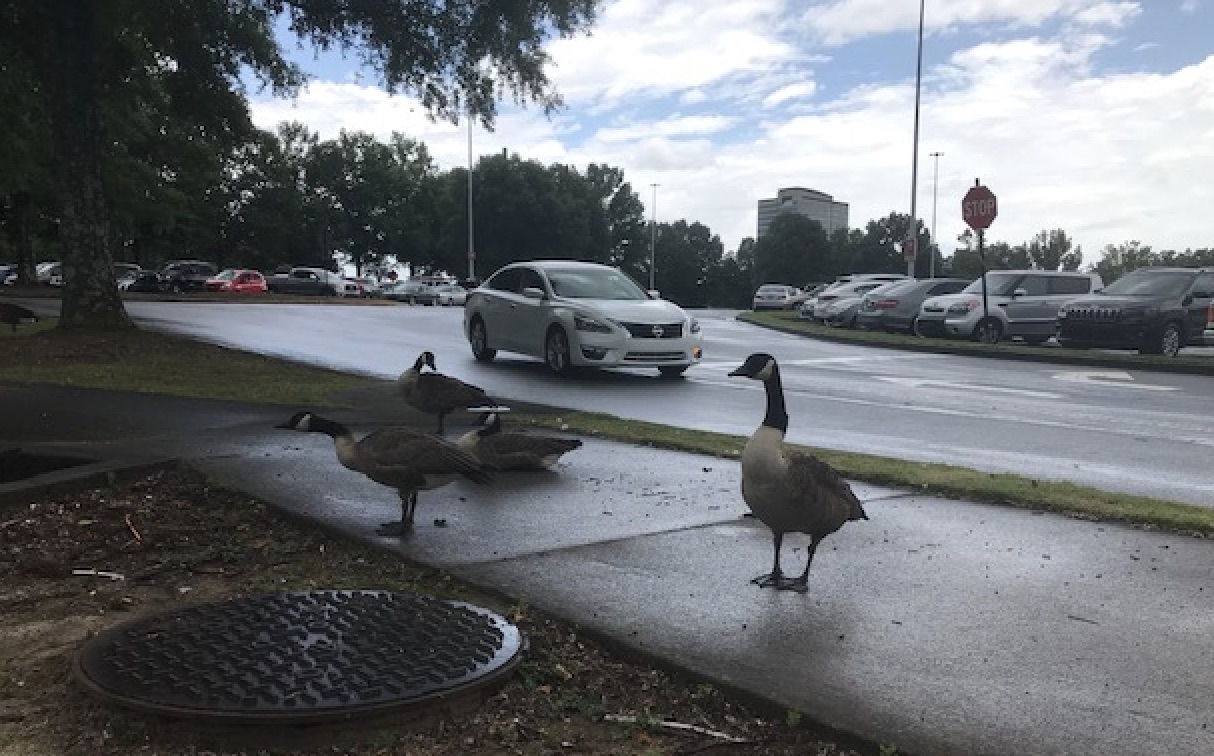 A few Canada geese were minding their own business on a sidewalk outside Perimeter Mall Saturday afternoon when the soft “oohhh” murmurs of passersby gave way to a tone more harsh as the pedestrians passed through the birds’ droppings. This is a sign of the summer season in metro Atlanta. 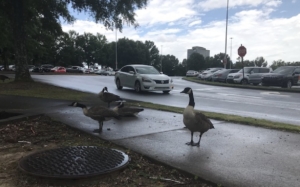 Flightless geese have become a major presence in the region. Two decades ago, they were a fairly rare sight. A decade ago, they started popping up in stories of trips to lakes around the region. Now they reside in close proximity to humans.

The situation has reached the point across the country that the Humane Society of the United States has produced an entire booklet on dealing with flightless geese – Solving Problems with Canada Geese: A management Plan and Information Guide.

Steps include allowing dogs to chase, but not catch, geese. And stopping the fertilization of lawns, which creates grass so soft and tasty that geese can’t seem to resist munching it.

Geesepeace is another organization that says it tries to promote the sharing of space by humans and geese in ways that allow geese to, “live benignly in the transitional space with minimal harm to the wildlife or disruption of the human community, wildlife habitat or natural areas.”

Geesepeace offers a series of videos on managing geese, including two videos shot in a popular Atlanta getaway, Lake Lure, N.C. There, wildlife officials spread oil over geese eggs to cut off oxygen and smother the embryo. Given the absence of baby geese in a nest, adults are less likely to protect and stay in the nest, according to the program.

Georgia’s wildlife officials remind that humans have little recourse but to grin and bear the birds’ presence. Most measures involve trying to chase them into someone else’s yard.

Chasing the birds isn’t really an option in the summer. Geese molt their feathers at this time of year and even they don’t have the option of flying to other destinations, according to a report from the Georgia Department of Natural Resources. This annual process spurs the type of complaints about the birds as voiced by the shoppers outside the mall on Saturday, according to Greg Balkcom, a DNR state waterfowl biologist. 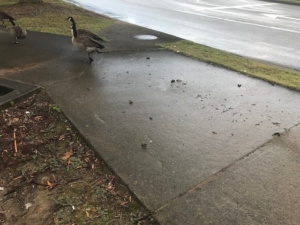 The Canada geese evidently left these droppings after resting on a sidewalk outside Perimeter Mall. Credit: David Pendered

“Each summer, in late June and early July, complaints about geese tends to go up,” Balkcom said in the statement. “This uptick in complaints goes hand-in-hand with the fact that geese go through a molting process in summer, during which they lose their flight feathers and are in the process of growing new ones.”

The guidelines DNR releases won’t help with the situation of geese soiling walkways in public places. Homeowners can tear a few pages that may not offer much help this year, but could be of use in the future.