Out of the Box, It’s CardboardCon

While Mardi  Gras was breaking out in New Orleans last weekend, an anti-carnival with all the snazz of a paper box unfolded in Atlanta. 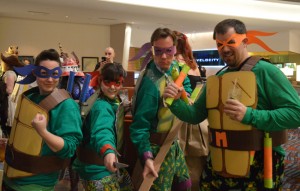 Scores of cardboard-covered figures paraded across downtown Atlanta last Saturday night, attracting attention from conventioneers, bar-hoppers and others out for good time.

In case you missed it – chances are you’ve never heard of it – Saturday marked Atlanta’s fifth annual CardboardCon.

Welcome to the antithesis of DragonCon, the world’s largest fantasy/sci-fi convention that brings tens of thousands of costumed conventioneers into downtown Atlanta on Labor Day weekend. CardboardCon draws them there by the tens in late February or early March in outfits repurposed from a product with 101 uses and its helpful sister, duct tape.

Its stars included the Colonel, the Cardboard Ambassador, the BoxGyros, their nemeses the Marvel Box Heroes and other cardboard-costumed characters. At one point they danced to the Pink Panther theme song playing in the Marriott Marquis atrium.

“It’s very bizarre, very odd, but it’s very entertaining,” said Valerie Atkinson, as she, her husband, Chad, and their friends, caught a glimpse of the boxy costumers while leaving a life insurance industry awards dinner at the Marriott Marquis.

Unlike DragonCon, where participants are often judged by the authenticity of their elaborate costumes and the specific characters they try to emulate, it’s difficult to know who a Cardboard Conster is trying to depict without asking. The answer may inspire a “Huh?”

These conventioneers often prefer not to be boxed or labeled in a way that is instantly recognized. They don’t expect the downtown hotels to even know they are “hosting” CardboardCon. A tracked FedEx package might get more attention from a concierge.

A lame robot leads to lampooning 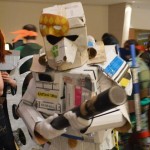 Inside this box mask are the brains behind CardboardCon: Andrew “Captain Drew” Duncan. Credit: Simrill Smith.

The plain beginning of CardboardCon dates back to the early 2000s when founder Andrew Duncan, a former Atlanta film industry prop man, set a screenplay at a gigantic science fiction convention. Duncan’s script included a character who wandered the convention in a hastily thrown-together cardboard robot costume.

When a friend asked Duncan in 2005 if he was going to attend DragonCon in costume, Duncan replied, “Not my style.”

Then Duncan was reminded of his character in the cardboard robot outfit. That costume would be cheap, quick and easy to make. He could lose pieces of it and spill beer repeatedly on it, and it wouldn’t make a difference.

Even better, Duncan said,  “It would be a perfect way to lampoon the care and effort that costumers dedicate to looking like their favorite characters.”

Duncan organized a flash mob of friends to join him in his low-rent cardboard invasion of DragonCon. He instructed friends to arrive at a downtown Atlanta Hotel lobby bar in cardboard costumes at a set time. Five minutes later, the group was instructed to sing “Beer, beer, beer,” to the tune of Monty Python’s “Spam, spam, spam.” A minute after that, Duncan told the group to burst into applause for sixty seconds, followed by a minute of non-stop “beeping,” and then leave. 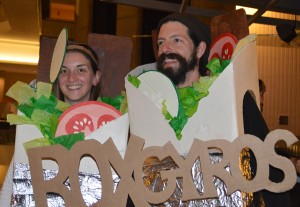 Since then, flash mobs, including “cardboard trooper” crashes of DragonCon costume contests have become a regular feature at that convention. Not every dress-up Wookie, Imperial stormtrooper or flesh-eating zombie has appreciated the gestures, however.

“Some are very annoyed by it. Some are very appreciative,” said David Stabler, 46. “It depends on how seriously you take yourself.”

The members of this crew clearly don’t. Stabler, who works in backup and recovery services for a technology company, went to CardboardCon as the Colonel, a “steampunk” retro and futuristic late 19th century southern military figure of his own creation. As the Colonel, Stabler relied on a Foghorn Leghorn-like accent to stay in character throughout the evening. He also carried a bag of nacho cheese Doritos in a secret compartment in the hat he had fashioned from an empty candle box. 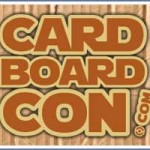 Stabler ended his CardboardCon experience singing rugby songs with some South Africans and dancing onstage to a karaoke performance at a downtown Atlanta bar.  Stabler said he would have sung, but he had trouble projecting his voice into a microphone through a cardboard box.

Meanwhile, there was a costume contest at Trader Vic’s, but few seem to remember who won.

“Everybody’s a winner,” Duncan said. Clearly this bunch isn’t in it for the prizes.

“The thing we love is to dress up in costumes and go out drinking,” said Dina Roth, 26, as she sipped on a vodka with Redbull at the atrium bar of the Marriott Marquis. “The thing we hate is spending a whole lot of money, time, sweat and tears putting together complicated costumes.”

For her costume, Roth wore a black leotard, with cardboard Vulcan ears and a cardboard Star Trek insignia. She is a princess by profession. Really. She performs as a princess at children’s parties.

Compared to DragonCon, which she also attends, CardboardCon “gives us more of a chance to relax,” Roth said.

Stabler agreed. He’s done the DragonCon thing, spent gobs of money on a meticulous recreation of the costume worn by the fictional Captain Hector Barbossa from the Pirates of the Caribbean movie series. That included finding the manufacturer of the buttons used on the outfit worn by actor Geoffrey Rush.

It isn’t the same as donning an outfit made of stiff paper products, Stabler said.

“If I want to look dirty I don’t have to use movie grade technology to make my costume look dirty. I can just roll around in my backyard,” Stabler said. “When I put on cardboard, it’s a completely different feeling.”