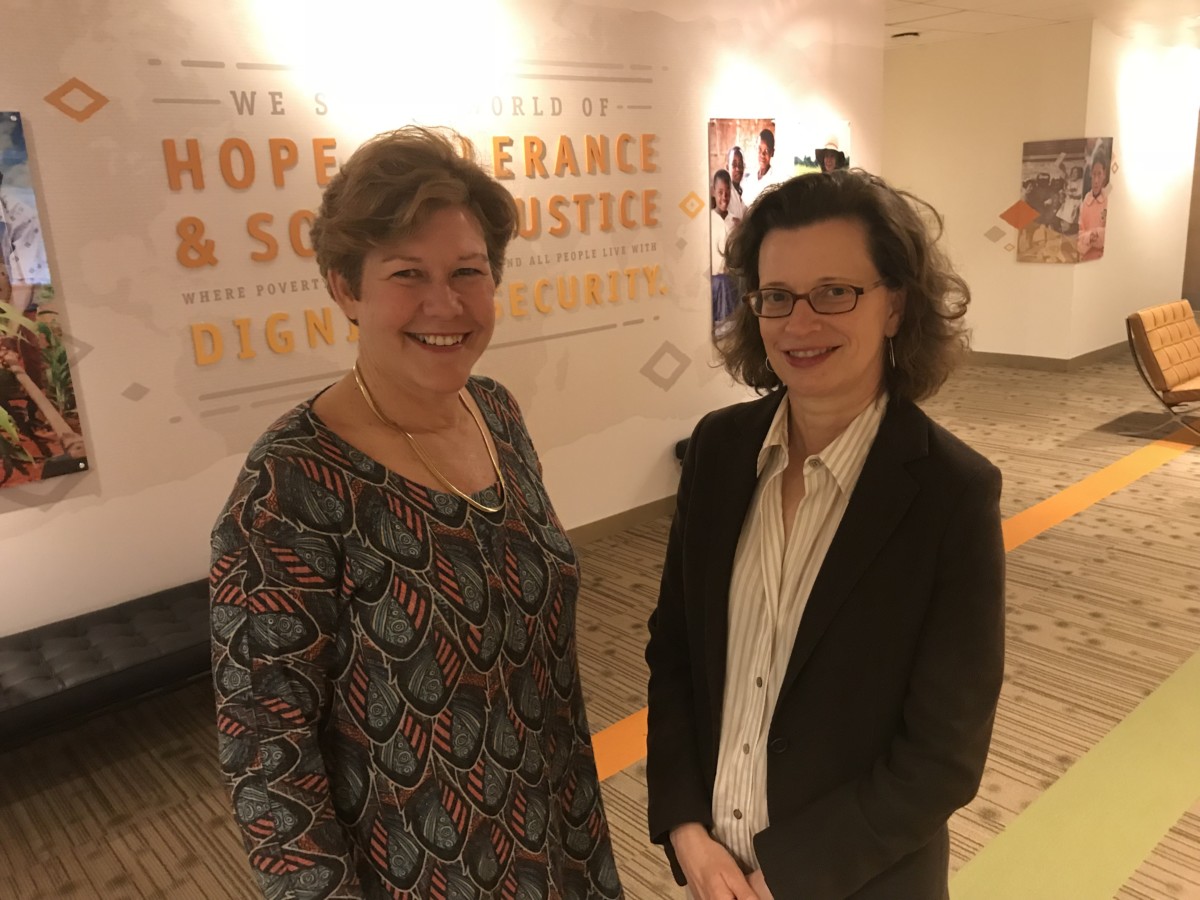 By Maria Saporta
As published in the Atlanta Business Chronicle on May 4, 2018

After 25 years in Atlanta, CARE is sprucing up its global headquarters at 151 Ellis Street in downtown Atlanta.

CARE has received a $5 million grant from the Robert W. Woodruff Foundation, which was instrumental in getting the international organization to move its headquarters from New York City to Atlanta in 1993.

The Woodruff grant will give CARE the ability to upgrade its dated office space with high cubicles to a more open and collaborative working environment with modern technology – and help the organization open up its building to the downtown community and the city.

“Thanks to the gift, we are not having to make the choice between spending $5 million in South Sudan or on our office in Atlanta,” said Michelle Nunn, president and CEO of CARE USA. “We also are talking to other donors. We hope to raise another $2 million to ensure that we can invest in the right technology and maximize our first floor.” 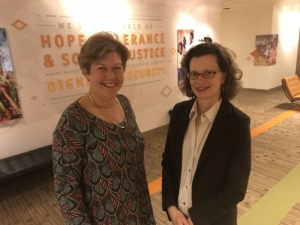 The physical improvements of CARE’s headquarters is symbolic of the changes taking place at the nonprofit, which fights poverty around the world by providing aid and investing in communities, by focusing on women and girls.

“When I came, the mandate from the board was to continue to transform the organization – to take a 70-year-old organization and make it as dynamic as possible,” said Nunn, who will celebrate her third anniversary as CEO in July.

And the role CARE is playing in Atlanta also is deepening.

For the first time in its history, both the CEO and the chair of CARE’s board are both women who are from Atlanta and have a vested interest in making the city a centerpiece for global health and development.

Nunn, who was the first executive director of Hands On Atlanta and went on to run the national Points of Light Foundation, ran for the U.S. Senate in 2014 – an attempt to follow in the footsteps of her father, former U.S. Sen. Sam Nunn (D-Georgia).

CARE’s board chair is Martha Brooks, former president and chief operating officer of Atlanta-based aluminum giant Novelis, and also a former board chair of the Carter Center’s Board of Councilors. Brooks joined CARE’s board in 2013 and was named board chair last September.

“The idea here is to use Atlanta as the base to drive the movement,” said Brooks, adding the renovation will “accelerate the transformation and adapt to today’s world.”

The staff at CARE’s headquarters has had a 12 percent growth rate over the past four years, and it expects that rate of growth to continue every year. Currently 42 percent of its headquarters’ staffers are millennials, who enjoy a more collaborative working environment than 1980s-style offices.

Also, CARE estimates that the new flexible convening space and technology could cut its annual costs by about $360,000 a year – allowing the organization to redirect those savings to its poverty-fighting mission.

The renovation, which should be completed within a year, will include a new Global Innovation Hub to bring together global health and development entrepreneurs and organizations to the building. Hub participants will have access to CARE’s team in Atlanta as well as associates in the 93 countries it serves.

The project also will include an open event space to be used by CARE as well as the broader local nonprofit and global health community.

CARE also has plans to revitalize and rebrand its underused Ellis Street Café, and turn it into an outward facing coffee shop inviting to the Atlanta community, especially Georgia State University students and people who live and work in downtown.

“We want to bring the assets from Atlanta to CARE,” Nunn said. “We want to get more people to come in and out of CARE’s work. Atlanta is the global health capital. We’d like for CARE to be part of the coalition that lifts Atlanta’s place in this work.”

CARE already has started several programs to foster new ties in the Atlanta community – its “Walk in Her Shoes” event, the CARE Women’s Network, CARE Journeys and holding its Global Leadership Conferences in Atlanta. The redesigned space will make it easier for CARE to host its meetings in Atlanta.

“We want this building to be a place where you want to be,” said Brooks, adding that the idea is to create “crave-able space” – especially on its first floor. “We want the streets around us to be alive.”

Nunn and Brooks also are exploring new and stronger partnerships with Atlanta institutions, nonprofits and companies, such as the Rotary Club of Atlanta, United Parcel Service Inc., The Coca-Cola Co., Delta Air Lines Inc., The Carter Center, Habitat for Humanity International, the Centers for Disease Control and Prevention, the Task Force for Global Health, the Georgia Global Health Alliance, MAP International, MedShare, Global Health Ministries, Emory Rollins School of Public Health, GSU’s School of Public Health, and the Center for Civil and Human Rights as well as others.

“Both of us have been circling this space,” Brooks said. “We can see all the touchpoints that exist in the 90-plus countries where we are working. We can see where these things ought to knit together. We need to find ways to collaborate in small ways, and that will lead to collaboration in bigger ways.”

Nunn said the Atlanta organizations can be working more closely together, and she hopes the entrepreneurial innovation hub will attract new partnerships.

As for her tenure at CARE, Nunn said she feels as though she’s living up to one of her core goals.

“I never had a 30-year plan,” Nunn said. “The larger trajectory is finding a platform where I can make a difference, whether it was at Hands on Atlanta, Points of Light or public service. When I started at Hands On Atlanta, I was waiting for my Peace Corps application to go through. It is a nice closing of a circle that’s brought me to be involved with CARE.”