It was a lunch of compassion.

When Progressive Redevelopment Inc. and CaringWorks held their annual gathering on Dec. 9 at the Atlanta Biltmore, several themes prevailed. In this time of economic suffering, it is a time to care for those less fortunate than us.

The first speaker was former Atlanta City Council President Lisa Borders, who received the inaugural “Courage to Care Award” from the two organizations.

Borders weaved a tale of how she was influenced by her grandfather — Williams Holmes Borders — and her parents. She remembered when her grandfather built the Wheat Street Gardens — a project of lower income homes. “He was helping people sustain their lives,” she said.

She shared some family sayings, such as passion turned into action. Or you deserve what you tolerate. At the time, her mother was giving her a warning about her boyfriend. But now she’s realized the saying is “applicable to every part” of her life.

“Why do we tolerate people not having a clean, affordable place to live,” Borders said. “The real axis of evil is poverty, ignorance and disease.”

But as we look to the next generation, Borders said times have changed in the way young people view their parents.

“They don’t want a ‘sage on stage’,” Borders said. “They want a ‘guide on their side.’ We must engage differently with the kids today.”

Townsend, who has written a book called: “Courage to Care; Strength to Serve,” laughingly referenced Borders’ award. “I love that you’ve stolen my title,” she said.

She went on to talk about her unusual family. She and her siblings would have to write letters to her grandmother, Rose Kennedy. Then they would received the letters back with portions underlined in red ink with her corrections.

Townsend said she didn’t really have a warm relationship with her grandmother until later in life when they would go on walks together. Despite having had a son who had become president of the United States, Kennedy sill remembered the pain she felt in Boston when she would see signs that said: “Help Wanted. No Irish Need Apply.”

Those words hurt the proud woman from a strong Irish Catholic family.

“The pain we feel as young people will affect you for the rest of your lives,” she said.

Townsend also said that whether it be at the dinner table or in a carpool, her parents would quiz their children on current events. When she was only three or four, her mother would take her to the Senate for the racketeering hearings.

Her father, Robert Kennedy, also made a deep impression on her. After he had gone to the Delta in Mississippi and seen families living in extreme poverty, Kennedy came back and told his children how fortunate they were. “You have to do something for your country,” he told them.

When her uncle was assassinated, her father took time to write her a letter urging her to be compassionate and to reach out to others. “You have a special responsibility,” he wrote.

It has been a tough year for PRI, which after 20 years of helping build affordable housing with support services, has seen some of its properties end up in foreclosure. To add insult to injury, the local daily paper incorrectly reported the situation (see below).

But on Thursday, the leaders of PRI and CaringWorks were among friends, enjoying the caring and compassion of those who still are trying to make the world a better place. 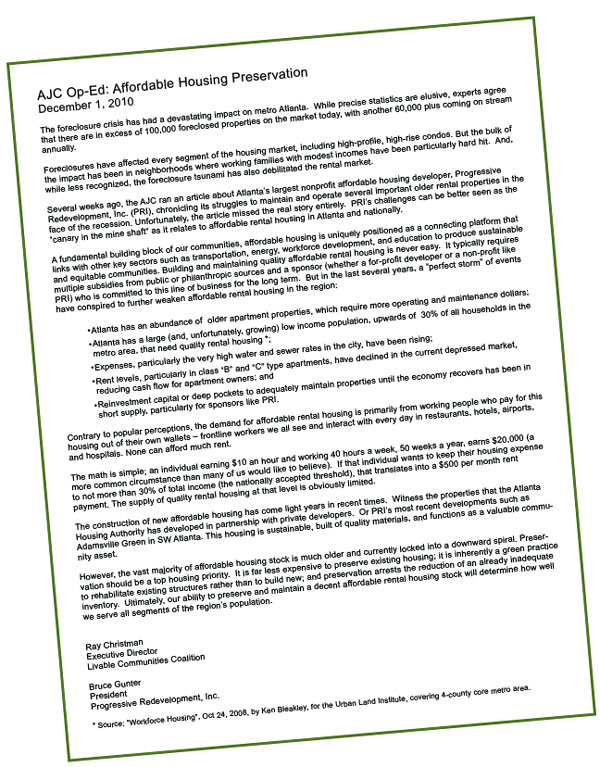