The Andrew Young School of Public Policy at Georgia State University unveiled a life-sized portrait of Carolyn and Andrew Young on Friday as a way to fully recognize their contributions to the college.

The portrait was a gift of long-time friend and retired architect Paul Rosser, the Andrew Young Foundation and the artist himself — Ross Rossin.

And during the unveiling ceremony event, it was obvious that the relationship between the Andrew Young School extended well beyond the former Atlanta mayor and United Nations Ambassador but was truly a family endeavor.

Carolyn Young serves on the board of the school. And the school also awards Carolyn McClain Young Scholarships to scholars from countries in the Caribbean and Africa. Andrea Young, president of the Andrew Young Foundation, also is involved with the school.

“There are so many other ways the Youngs have contributed,” said Mary Beth Walker, dean of the Andrew Young School, adding that the international students who come to study at Georgia State then are able to gain the skills to improve the economies and governments in their home countries.” 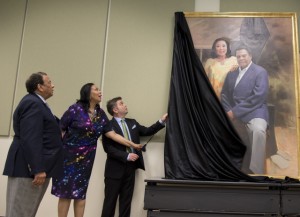 At the moment of the portrait unveiling, Andrew and Carolyn Young with the painter — Ross Rossin (Special – GSU School of Public Policy and Andrew Young Foundation)

Before unveiling the portrait, Rosser quoted Andrew Young, who said: “Our job is changing the world, making it more equitable, more peaceful and more prosperous.”

It was Rosser who mentioned that Carolyn would be celebrating her birthday on Saturday, Sept. 14.

“Today we are celebrating the partnership of Carolyn and Andrew Young,” Rosser said of the Youngs, who got married in 1996. “All of us are very thankful for Ambassador Young’s work and what happens here.”

Rossin said he has been privileged to have traveled with Andrew Young to various places around the country and the world. When people stop Young at the airport and ask how to get in touch with him, Rossin said that Young will tell them: “When you come to Atlanta, ask for me.”

At first, Rossin thought that was an odd response. But then he realized it was totally appropriate.

“Atlanta is Andy; Atlanta is Andy and Carolyn,” Rossin said. “They have such a generous spirit. I hope that spirit is captured in this painting.” 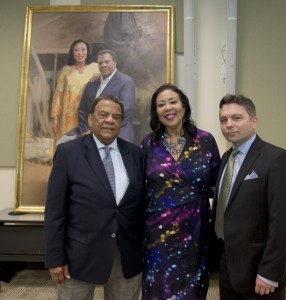 From Young’s perspective, the value of the school is to continue to teach what has made Atlanta special.

“This is a wonderful institution, and it’s an idea whose time has come,” Young said. “It’s not because it’s got my name on it. It’s because it’s in the middle of a city that has worked. We even have glossed over it a little too much — black-white, gay-straight, the haves and have nots — some how they came together to make decisions about the future.”

But perhaps the most important secret of Atlanta’s success was its ability to create public-private partnerships, Young said. He talked about all the tax-exempt municipal bonds that have been issued throughout all the mayoral administrations. He checked his figures with former Atlanta Mayor Bill Campbell, who was at the reception with his wife, Sharon.

“This is public policy school, but the public policy of Atlanta is to do everything with private money,” Young said, adding that most people in Atlanta “don’t have a clue how this city works.”

Carolyn Young was emotionally moved by the portrait unveiling event, remembering when she first attended Georgia State in 1972 and there were very few African American students enrolled in the school. She said that she had let her faith guide her throughout her life.

“If you let God lead your life, there’s no end to what you can accomplish,” she said. “I married a wonderful man. Who would have ever thought I would have married Andrew Young. He is the next best thing to God.”