Carter Center partners with GLIDE to treat River Blindness in the Americas; LF and malaria on Hispaniola

The Carter Center and the Global Institute for Disease Elimination (GLIDE) are a new partnership to support innovative disease elimination efforts in the Americas.

GLIDE, an initiative of the Crown Prince Court of Abu Dhabi and the Bill & Melinda Gates Foundation, has pledged substantial financial and technological support for the Carter Center’s programs to eliminate two neglected diseases:

The new partnership will help accelerate progress toward achieving the goals in the newly launched World Health Organization Neglected Tropical Diseases Roadmap 2021-2030, which includes targets for a 90 percent reduction in the number of people requiring treatment for diseases and elimination of at least one of the diseases in 100 countries. 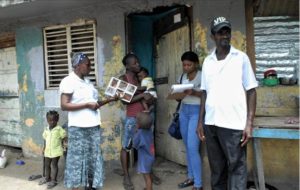 Since 1993, the Carter Center’s Onchocerciasis Elimination Program for the Americas (OEPA) has been working to eliminate river blindness transmission in North, Central, and South America by partnering with six nations’ ministries of health, the Pan American Health Organization (PAHO), and many other partners.

These joint efforts have succeeded in eliminating transmission of the disease from Colombia, Ecuador, Mexico, and Guatemala (each officially verified by the World Health Organization). In the Americas, transmission of the parasite continues only in an isolated, hard to reach area deep in the Amazon rainforest along the Brazil-Venezuela border, mainly affecting the Yanomami, a nomadic indigenous tribe living in that region.

River blindness is caused by bites of Simulium black flies infected by the parasitic worm Onchocerca volvulus; symptoms can include intense itching, rash, and visual impairment, potentially leading to permanent blindness. Transmission can be eliminated through long-term mass drug administration with the antifilarial medication ivermectin (donated by Merck & Co. Inc. under the brand name Mectizan®). 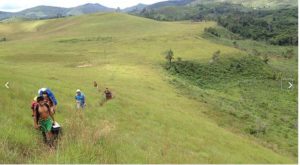 The Carter Center in Venezuela working on the river blindness program and accessing the Amazon Rainforest (Photo by O. Noya for the Minister of Health)

“The challenge is in finding and reaching the people who need the medication,” said Dr. Gregory Noland, director of both the Carter Center River Blindness Elimination Program and its Hispaniola Initiative. “To eliminate river blindness from the Americas, we must reach everyone, even those living in the deepest parts of the rainforest.”

The partnership with GLIDE will provide resources to test state-of-the-art technology to help locate and quickly treat people in the most remote unreached rainforest villages, the last vestige of the disease in the Western Hemisphere. Lessons learned from the Americas have helped to inform river blindness elimination efforts in Africa, where 99 percent of the remaining disease burden exists.

The island of Hispaniola, shared by Haiti and the Dominican Republic, accounts for 95 percent of the lymphatic filariasis (LF) burden in the Americas and is the last remaining malaria-endemic island in the Caribbean. 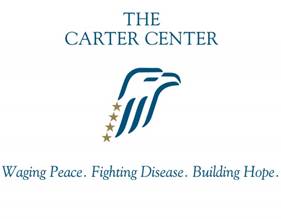 Through its Hispaniola Initiative, the Carter Center has been working since 2008 with the governments of Haiti and the Dominican Republic to eliminate transmission of LF and malaria from Hispaniola. Achieving elimination of both diseases would be a historic achievement.

LF, or elephantiasis, is a mosquito-transmitted disease that damages the lymphatic system and can cause limbs and genitals to swell to disabling proportions. It is prevented with a combination of the drugs diethylcarbamazine (DEC) and albendazole (donated by Eisai and GSK, respectively), which are administered annually to at-risk communities for several years. Together with the ministries of health, the Carter Center takes an active role in drug distribution, program monitoring and evaluation, and providing care (including mental health support) for those who suffer complications from chronic LF. 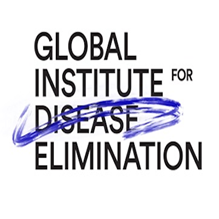 Malaria is a mosquito-borne parasitic disease that kills approximately 400,000 people each year, mostly children, with about 228 million cases of the disease reported worldwide. Symptoms include fever, intense headaches, vomiting, body-shaking chills, and other flu-like symptoms. Without treatment, malaria can lead to anemia, hypoglycemia, cerebral malaria, coma, and death.

GLIDE’s partnership will help Haiti and the Dominican Republic in their final push to eliminate both malaria and LF.

“We are privileged to help The Carter Center accelerate toward its goal of eliminating river blindness, LF, and malaria by partnering on this exciting, leading-edge initiative,” said Simon Bland, CEO of GLIDE. “The learnings may well provide clues for how we speed up elimination efforts in other remote global communities and takes us one step closer to consigning diseases of poverty to the history books.”