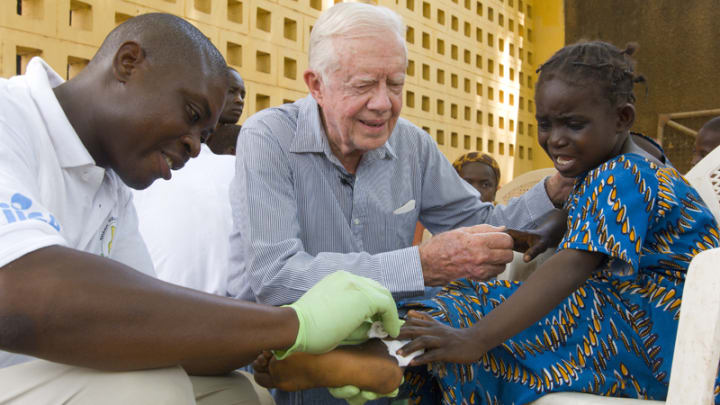 The Carter Center and Dr. Riek Gai Kok, the minister of health for South Sudan, made a historic announcement Wednesday morning – the African nation has officially stopped the transmission of Guinea worm disease.

For many years, the area that is now the nation of South Sudan was the most Guinea worm-endemic nation in the world. Now South Sudan is enjoying 15 consecutive months with zero Guinea worm cases.

The announcement came during the 22nd annual review of Guinea worm eradiation campaign in Atlanta – hosted by the Carter Center and the World Health Organization. More than 100 international health experts and partners are attending the annual review, which is being held in Atlanta. The news conference was led by eradication expert Dr. Donald R. Hopkins. 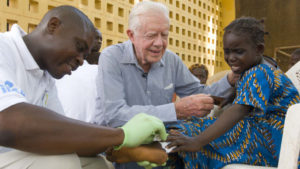 “This is a great achievement for our young nation,” Dr. Reik Gai Kok said during the meeting at the Carter Center. “Our health workers and thousands of volunteers have done exemplary work eliminating this disease across our country, and I have no doubt that the World Health Organization will grant certification in due time.”

The news brings the world one step closer to the eradication of Guinea worm, a painful and often grotesque parasitic disease.

The Carter Center said that only 30 human cases of Guinea worm disease were reported from two countries – 15 in Chad and 15 in Ethiopia. When the Carter Center began leading the international eradication campaign in 198, there were about 3.5 million cases in 21 countries in Africa and Asia.

Guinea worm and polio are the only two active disease eradication campaigns underway internationally. The number of cases for both diseases have been dramatically reduced, and there is hope that both diseases soon will no longer be a threat to global health.

Smallpox is the first disease in history to have been eradicated. In May 1980, the World Health Assembly declared the eradication of smallpox after two years of surveillance and searching. The last known natural case was in Somalia in 1977, and thanks to a global immunization campaign, the disease was eliminated. 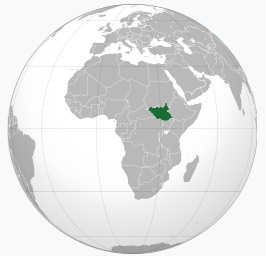 “The people and government of South Sudan have achieved a great milestone in the worldwide effort to eradicate Guinea worm disease,” Carter said in a statement. “Today’s news is the fruit of good faith shown by all parties that agreed to the 1995 cease-fire during Sudan’s terrible civil war, allowing health workers to start a campaign of interventions against this horrible parasitic disease.”

Carter, who negotiated the cease-fire, added that “South Sudan’s success shows that people can collaborate for the common good. We look forward to certification by the WHO in the next few years that South Sudan has won the battle against this ancient scourge. We are within reach of a world free of Guinea worm disease.”

For President Carter, the fight is a personal one.

In August 2015, Carter held a press conference to answer questions about his own health challenges –metastatic cancer.

When asked about his remaining priorities, Carter was quick to answer.

“I would like to see Guinea worm completely eradicated before I die,” Carter said with a twinkle in his eye. “I’d like for the last Guinea worm to die before I do.”