The week before the Super Bowl, Kavin Caruso showed off his stellar memory by naming every NFL title winner in the 1960s and the teams they defeated. With a mental vise grip for dates and statistics, he’d be a ringer for any trivia team. 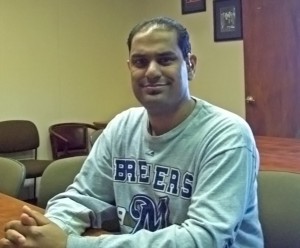 Kavin Caruso, who suffers from mild schizophrenia and anxiety, attends a vocational center in downtown Atlanta to help him develop work skills.

But in the wider arena of job competition and social acceptance, Caruso is a decided underdog. At 32, he is mostly deaf from the massive ear infections he suffered as an orphan from India before his adoption by a family in Tucker. He also suffers from a mild form of schizophrenia and anxiety.

These disabilities are huge strikes against him in his quest to find a job, like the one in sales at Home Depot that he held for nine years until the economic meltdown. According to the National Alliance on Mental Illness, the unemployment rate for adults diagnosed as mentally ill is three to five times higher than the general population.

Caruso’s persistence is a hopeful sign, especially for those among the thousands of Georgia’s long-term unemployed. Faced with so many reasons to give up, he does not.

If they can do it

I interviewed Caruso last week at Community Friendship Inc., a non-profit center in downtown Atlanta that helps people who suffer from mental illnesses to learn job skills and find work, how to live among adults and maintain relationships. Caruso attends the center five hours daily five days a week.

Deaf in one ear and wearing a hearing aid in the other, he is charming, upbeat and open about himself, though he can be difficult to pin down. He talks fast and tends to add numerous details others either might not recall or could consider distracting from the arc of a narrative. He loves to talk about his favorite TV shows, popular music and sports. He loves country music, pizza, and bratwurst, and has no interest in traveling to his native country, or anywhere else outside his adopted country. That’s because Caruso is afraid of the shots he’d have to take for foreign travel. 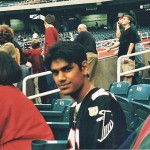 Kavin Caruso, at 17, at an Atlanta Falcons game in 1998. His dream is to be a sportscaster. Credit: the Caruso family.

Within three minutes and fifteen seconds Caruso rattled off every Super Bowl winner and NFL champion in the 1960s and several in the 1950s, and included multiple details from the games that most hardcore fans would never bother to remember. That included the specific dates of the games, which networks televised them and the collegiate histories of the players who scored the winning touchdowns.

He recalled how the Green Bay Packers beat the Cleveland Browns on January 2, 1966, Jim Brown’s last game, a week after they bested the Baltimore Colts on a controversial Don Chandler field goal. He recalled that CBS and NBC broadcast Super Bowl I.

If he sounds like a sportscaster, that’s what he dreams of becoming. (He’s also realistic, and is seeking to enter Georgia Gwinnett College to earn a certificate in bookkeeping.) To those who doubt his chances, Caruso points to Seattle Seahawks fullback Derrick Coleman, the first legally deaf player in the NFL, and Heather Lee Whitestone, the first deaf Miss America title holder.

“When I read their stories, I think, ‘If they can do that why can’t I?’” Caruso asked.

The boy without a birthdate

Caruso is a bit fuzzier about his own past. He celebrates his birthday on September 3, the same day Charlie Sheen was born and Vince Lombardi died, but that’s probably not his real birthday, Caruso said.

His parents, John and Trudy Caruso, filled in some of the details. Their second child, whom they adopted through an agency, was left at “a birthing station” in Calcutta, probably by an unwed mother. When the infant Kavin arrived in Atlanta around Halloween 1981, he had a callous on the back of his head suggesting he had hardly been picked up. Kavin was maybe three months old and weighed only five pounds, his mother recalled. 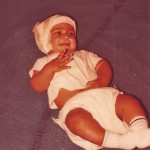 Kavin, after ear surgery in 1982, a year after arriving in Atlanta from India. Credit: the Caruso family.

“There is a natural bonding that supposed to take place,” Trudy Caruso said. “The child wants to be held. Kavin was never able to feel that until he was five months old. It gave me a great of deal respect for how lucky American infants are.”

In Atlanta, uncommon resources began to flow to Kavin. He underwent surgeries for his hearing and other issues. Because his pediatrician said Kavin needed to bond with his adoptive parents, Kavin stayed home instead of at the hospital. So they visited the pediatrician daily, sometimes twice a day, and were seen immediately on every visit.

Kavin healed, grew, and was enrolled in special education programs in public school with other students with hearing problems.

In 10th grade at Clarkston High School, Kavin Caruso began dealing with another disability.  “He started complaining that people were out to get him at school,” his mother said.

The complaint puzzled the Carusos because their son was somewhat of a loner. He had previously been diagnosed with attention deficit problems. Because of his problems with social cues, Kavin hadn’t had a chance to make any friends—or enemies—at school.  His parents never recalled him receiving a telephone call from another student.

Kavin Caruso said he’s never had a problem with auditory or visual hallucinations. He is currently taking medication for anxiety. One doctor, Caruso said, has recently raised doubts about his original diagnosis.

One possible reason that Kavin was diagnosed schizophrenic: “There is research that if you make the diagnosis early in the case of mental illness you can have a better outcome and less relapses,” said Trudy Caruso.

I asked Caruso what it’s like to be in the grip of his illness. He recalled falling into a spiral of obsessive thinking after the late actor Christopher Reeve suffered a spinal cord injury that paralyzed him from the neck down. Caruso could barely stop thinking that the same could happen to him.

“That really bothered me. Him being a celebrity. Him getting paralyzed from the neck down. He did all these movies. And then this happened,” said Caruso. “People get in car accidents all the time. You see people get paralyzed all the time.”

“He (Reeve) missed out on a lot of things he wanted to do,” Caruso said.

A mind for facts

Founded in 1970, C.F.I.’s mission “is to provide a supportive community for people whose mental illness prevents them from participating in community life, employment and relationships.”

Caruso doesn’t want to miss out either. So he spends his days at the center taking classes on computer applications, business presentations, how to research topics, structure businesses and how to interact with people.

Those basic skills join his highly advanced skill of keeping a detailed mental calendar of historical facts. Give him any date and he can probably tell you what day of the week it was or will be.

That includes The Beatles February 9th debut on The Ed Sullivan Show in 1964. It was a Sunday, just as the upcoming February 9th will occur on a Sunday, says Caruso and the calendar confirms.

Caruso knew that Elvis died “on the toilet, supposedly,” on Aug. 16, 1977, the very day Madonna turned 19. Caruso rattled off the dates and days of his brother and sister’s births, his parents’ marriage and when they moved from Birmingham to Wisconsin and then to metro Atlanta.

Perhaps an employer will read this and see a great fit for Caruso’s memory power. Advocacy groups like CFI point out that many people suffering from mental disorders are just as capable of working as are people with physical disabilities. The high unemployment rate among mentally ill people is costly and unnecessary and putting them to work is vital to promoting their recovery and inclusion in society, they say.

In the meantime, Caruso embodies the spirit of moving forward despite stigma, judgment and rejection for what cannot be controlled. He is a hero who waits for someone who can value what sets him apart. Someone who might even think of him, in his own way, as super.

Previous Article
The State of the States, Part 2
Next Article
‘Jack Ryan: Shadow Agent’ – a throwback to good spy movies of old